Decades after its discovery, the Betz Sphere remains a scientific... 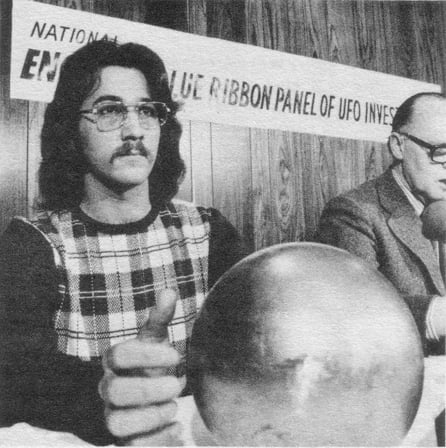 The so-called ‘Alien sphere’ was discovered in 1974. After several tests, experts concluded that the object was a magnetic sphere sensitive to magnetic fields, numerous sound emissions, and mechanical stimulation. The sphere was able to withstand a pressure of 120,000 pounds per square inch, concluding that it was composed out of stainless steel, specifically magnetic ferrous alloy #431.

Have you heard about the Betz sphere? It is just one of the many objects that have been discovered on Earth completely defying explanation and reason.

Since time immemorial, people on Earth have stumbled across mysterious objects which according to many, are conclusive proof that extraterrestrial civilizations, time travelers or lost civilizations have existed on Earth.

Many times, history has proven that our ancestors were far more advanced than what we credit them for. However, on many different occasions, we have been left perplexed by the mystery and intrigue of these perplexing and often strange discoveries, most of which cannot be explained by modern science.

Among the many strange objects discovered on Earth is the so-called Betz Sphere. Found in 1974, a strange metallic sphere became the center of attention in the US.

The Betz sphere or Betz Orb, the object has never been fully explained by experts, even though countless theories have been proposed. Among many theories, there are some who suggest –hat given the peculiar characteristic behind the artifact—it may be an extraterrestrial object.

The sphere was discovered in 1974 when Terry Mathew Betz, –thus the Betz sphere— a medical student discovered the object after a great fire had destroyed a large area of a nearby forest near his home in Jacksonville.

The object, of approximately 20 cm in diameter, was in perfect condition and had a mysterious triangle depicted on its surface.

The Betz family concluded that it was probably the remains of a satellite or military equipment, however, there was no crater caused by the impact or any other sign of damage to the surroundings. Just a massive fire.

Then strange things started happening. According to reports from the family, the metallic sphere seems to react to certain musical notes. Weird right?

The Betz family reported strange behavior from the family dog. May believe that this behavior was attributed to a high-frequency wave originating from the object, outside the hearing range of humans.

As if all of that wasn’t strange enough, the family reported that if the orb was placed on the floor and pushed, it changed direction by its own, and returned to the starting point.

The Jacksonville Journal sent a photographer, Lou Egner. Mrs. Betz told him to put the sphere on the floor:

“It rolled a ways then stopped. So what? She said, ‘Just wait a minute.’ It turned by itself and rolled to the right about four feet. It stopped. Then it turned again and rolled to the left about eight feet, made a big arc and came right back to my feet.”

Furthermore, a strange sound could be heard coming from inside the sphere. All of these statements were corroborated by a reporter from the Tampa Bay Times.

However, the media wasn’t the only one interested in the sphere.

The United States Navy as well as NASA are said to have shown interest when the sphere was found, and even though the family refused to give the sphere to the Navy or NASA at the beginning, they ended up delivering the orb to the Navy due to the many unexplainable phenomena surrounding the sphere.

Chris Berninger, spokesman for the US Navy, after receiving the sphere said: “Our first X-ray attempts got us nowhere. We’re going to use a more powerful machine on it and also run spectrograph tests to determine what metal it’s made of… There’s certainly something odd about it.”

The more tests that were performed, the more perplexed were people left.

Further tests revealed that the ‘space balls’ shell was around one-half inch thick and that the sphere was able to withstand a pressure of 120,000 pounds per square inch, concluding that it was composed out of stainless steel, specifically magnetic ferrous alloy #431.

Stainless 431 is a machinable and workable steel with added nickel that toughens it while eliminating unwelcome delta ferrite.

Interestingly, this alloy displays improved corrosion resistance and toughness as a quench-hardenable stainless steel. Its corrosion resistance makes it ideal for marine and aircraft applications. This alloy is used for aircraft fasteners and fittings and should be considered for structural parts in marine atmospheres.

Dr. James Albert Harder — a professor emeritus of civil and hydraulic engineering at the University of California at Berkeley showed interest in the mystery sphere.

“He [Dr. Harder] asserted, based on his X-ray studies, that the two internal spheres are made of elements far heavier than anything known to science. While the heaviest element yet produced in any atomic reactor here on Earth has an atomic number of 105, and the heaviest element occurring naturally on Earth is uranium, with an atomic number of 92, Harder claims to have determined that the Betz sphere has atomic numbers higher than 140. If one were to drill into the sphere, he asserted, ‘perhaps the masses would go critical’ and explode like an atomic bomb.”

IN addition to numerous tests, the so-called “ball from space” was also examined by Dr. Carl Williston of Omega Minus One, an institution located in the state of Louisiana at the time.

In his six hours of testing, Dr. Williston found that the sphere contained three magnetic poles and a possible fourth.

Dr. Carl Williston stated that the aspect of the magnetic field was a mind bender, the flux density of the field appeared to vary in strength based on an unknown pattern.

Simply stated, the power of the magnetic portion varied up and down. Back in 1974, this phenomenon was not part of our known physics. The same applied to the multiple poles.

X-Ray tests revealed more mysteries. It’s as if the Betz sphere was a Russian Matryoshka doll, only from outer space. One mystery was hidden in another, and another mystery hidden in yet another one.

X-Ray revealed 3 similar spheroid shapes within the ball. Curiously, these 3 shapes had a “halo” surrounding them, as though they were surrounded by a material with a different density. The metal was similar to stainless steel but had some unknown content making it slightly different.

Left perplexed by its composition and characteristics, experts concluded that this unusual ‘ball’ was a magnetic sphere sensitive to magnetic fields, numerous sound emissions, and mechanical stimulation. It was both passive and active. If it was an extraterrestrial probe, it might possibly be in a damaged state.