The Great Pyramid of Giza was built in Harmony with...

There are many questions surrounding the Great Pyramid of Giza. Why was the Pyramid built to the size that it was built? What was the original purpose of this majestic structure, and why was it built in the first place? Are the ancient Egyptians the original builders of the Grat Pyramid? Or is it possible that somehow, an ancient civilization predating the Ancient Egyptian built this ancient wonder? These questions still remain a mystery for mainstream scholars.

It remains a profound mystery the fact that the Great Pyramid of Giza was built with such precision. The fact that The Great Pyramid is the most accurately aligned structure in existence and faces true north with only 3/60th of a degree of error is something mind-boggling.

The position of the North Pole moves over time and the pyramid was exactly aligned at one time. Also, the Great Pyramid is located at the center of the land mass of the earth. The east/west parallel that crosses the most land and the north/south meridian that crosses the most land intersect in two places on the earth, one in the ocean and the other at the Great Pyramid. All of these are indicators of a structure built in harmony with our planet and the incredible traits do not end there. 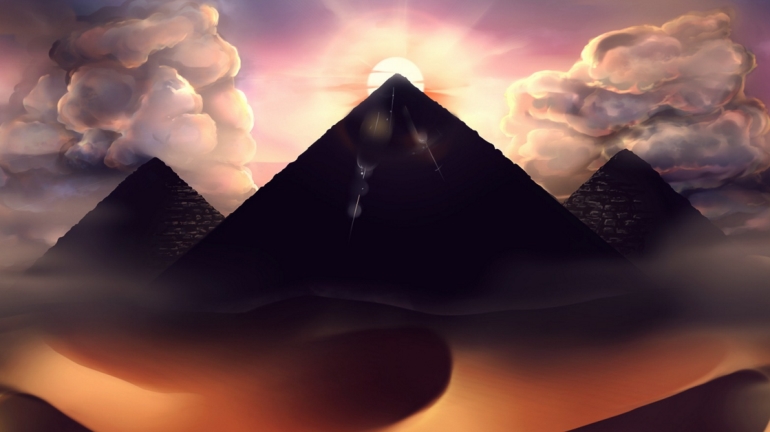 A Harmonic structure from base to top

Researchers believe that the Great Pyramid of Giza was originally covered with casing stones (made of highly polished limestone). These casing stones reflected the sun’s light and made the pyramid shine like a jewel. They are no longer present being used by Arabs to build mosques after an earthquake in the 14th century loosened many of them. It has been calculated that the original pyramid with its casing stones would act like gigantic mirrors and reflect light so powerful that it would be visible from the moon as a shining star on earth. Appropriately, the ancient Egyptians called the Great Pyramid “Ikhet”, meaning the “Glorious Light”.  How these blocks were transported and assembled into the pyramid is still a mystery. – (source)

According to reports, the outer mantle was composed of 144,000 casing stones, all of them highly polished and flat to an accuracy of 1/100th of an inch, about 100 inches thick and weighing approx. 15 tons each. This is why researchers have focused on the figure 144,000 while trying to understand the mysterious link between the planet and the Great Pyramid of Giza.

It is believed that the numeric value of 144,000 plays a key role in the harmonic connection that eventually determined the exact size of the structure.

Furthermore according to Sir William Matthew Flinders Petrie an English Egyptologist and a pioneer of systematic methodology in archaeology and preservation of artefacts the above association is accurate since the margin of error one would be dealing with in determining the base length of the structure would be about 1 / 4000 of the actual distance itself:

With the above established, one may note that a perfect ratio of 1 / 14400 under the WGS84 model may be had for the pyramid, quite well within the margin of error as outlined by Petrie:

It is evident that the governing principle which determined the baseline measure of the Great Pyramid of Giza was the decision of its (unknown) builders in choosing a distance length equal to  1 / 14400 of the elliptical arc separation between the center of the Great Pyramid and the equator of planet Earth. This indicates that the ancient builders had to have had knowledge of the exact shape and size of the Earth, something that mainstream scholars believe impossible at that time.

However, it still remains a mystery as to who were the exact builders of the Great Pyramid of Giza and from where they obtained the knowledge and technology to erect one of the greatest structures in the history of our planet.

Furthermore, the weight of the pyramid is estimated at 5,955,000 tons. Multiplied by 10^8 gives a reasonable estimate of the earth’s mass, and according to surveys, the relationship between Pi (p) and Phi (F) is expressed in the fundamental proportions of the Great Pyramid.

In conclusion, we can firmly say that the Great Pyramid of Giza is, without a doubt, a structure built in nearly perfect harmony with planet Earth.