The hidden messages of Michelangelo in the Sistine Chapel

The recently published Book by restaurateur Silvio Goren, has raised dozens of questions about the work of Michelangelo in the Sistine Chapel with assumptions of hidden messages inside the Sistine Chapel. What if the work of this Renaissance genius was a reaction against the absolute power of the Catholic Church during his time? Could he have wanted to point out the man above divinity, or was he pointing towards science as a religion that overcomes a doctrine? Is there a possibility that Michelangelo wanted to send a message through his work like Leonardo da Vinci did?

Silvio Goren a professor with a degree in Conservation and Restoration in cultural heritage points out that  “Michelangelo painted the Sistine Chapel in the sixteenth century, a time when both religion and science believed to hold the absolute truth.”

The Sistine chapel was commissioned by Pope Sixtus IV: “Sixtus” from where it got its name and curiously has the same dimensions that the temple of Solomon had on Jerusalem’s Temple Mount as described in the Old Testament. Michelangelo performed his work without the use of assistants.

Michelangelo completed his work on the ceiling of the Sistine Chapel in a period of four years, starting his painting from east to west and beginning from the entrance of the Chapel and finishing above the altar. The section where he depicted God separating light from darkness is where researchers, historians and art critics are struggling to understand what this genius was trying to say; hiding an accurate depiction of the human brain.

Why did Michelangelo highlight God’s neck? this obviously was the intention of the artist to point toward a specific region and it is the region where researchers suggest, Michelangelo left a hidden message. Researchers state that Michelangelo paid good attention when drawing the human neck, and in no other paintings but this one is the neck displayed oddly; stating that if one superimposes a detailed image of God’s neck painted in the Sistine chapel in the Separation of Light and Darkness with a photograph of the human brain as one would see it from below, the lines of God’s neck appear to precisely fit into the features of the human brain. Coincidence? 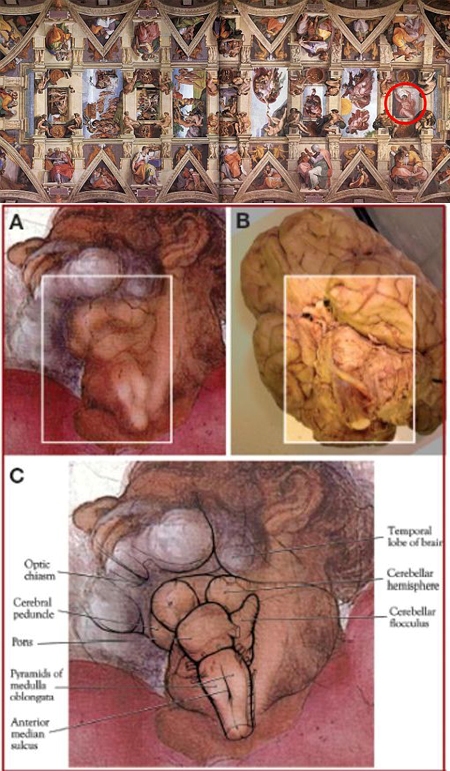 In his book, Silvio Goren explains that, at the center of the ceiling of the Sistine Chapel, Michelangelo painted nine scenes which are narrated in the book of Genesis. Out of these, we find the famously recognized Creation of Adam, a scene depicting the precise moment that God gave life to the first man, according to Judeo-Christianity. According to the investigation of professor Goren, the depiction and his statement are based on the theory that Frank Lynn Meshberger published in the 1990s, where both authors believe that there is something hidden in the image(s) painted by Michelangelo: the cloak that covers the figure of God represents almost perfectly the appearance of a human brain, including arteries, glands and optic nerves, all of that seen from the perspective of a lateral cut. Is it possible that Michelangelo actually portrayed an anatomically accurate image of the human brain hiding it behind God?

Michelangelo Buonarroti was a genius indeed; he was a sculptor and architect but most importantly he was a anatomist, something he tried very hard to keep in the shadows to the point that destroyed almost all of his anatomical sketches and written texts. Over five hundred years after Michelangelo crated this masterpiece we are perhaps a step closer to finding out what the genius behind the paintings of the Sistine Chapel painted in code. 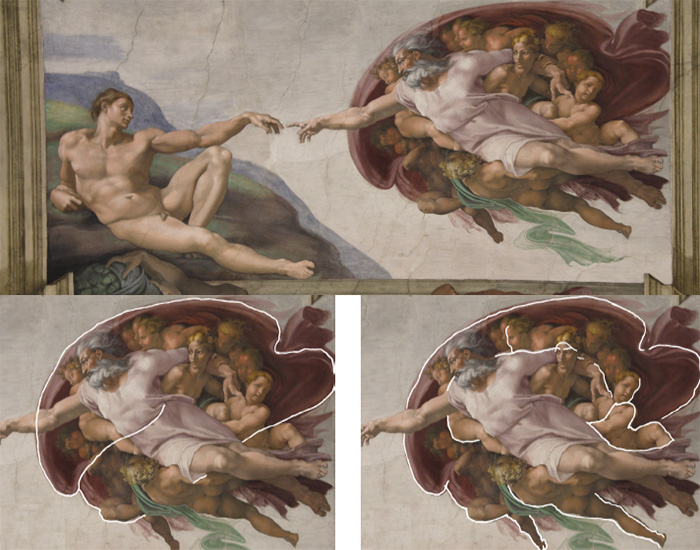 Physician Frank Meshberger has several suggestions about the intriguing artwork where he speculates that Michelangelo encircled God with a shroud wanting to represent (and he did so incredibly well) the human brain perhaps suggesting that that God was not only giving life to Adam, but also gifting him with a supreme human intelligence.