A Detailed Description Of The Ancient Egyptian Cosmos

The Egyptian cosmos is separated into two parts. The upper region consists of the earth (Geb), atmosphere (Shu) and heavens (Nut). Nut and Geb are lovers, but Shu must hold them apart to allow the other gods the freedom to move across the cosmos.

Most important of these celestial children is Ra, the sun-god, who sails across the sky at day and into the underworld at night. Whereas the heavenly bodies represent the divine order of the universe, the underworld epitomizes pure chaos.

The ‘Duat’, as it is known, is a dark abyss thriving with snakes, monsters and evil spirits. 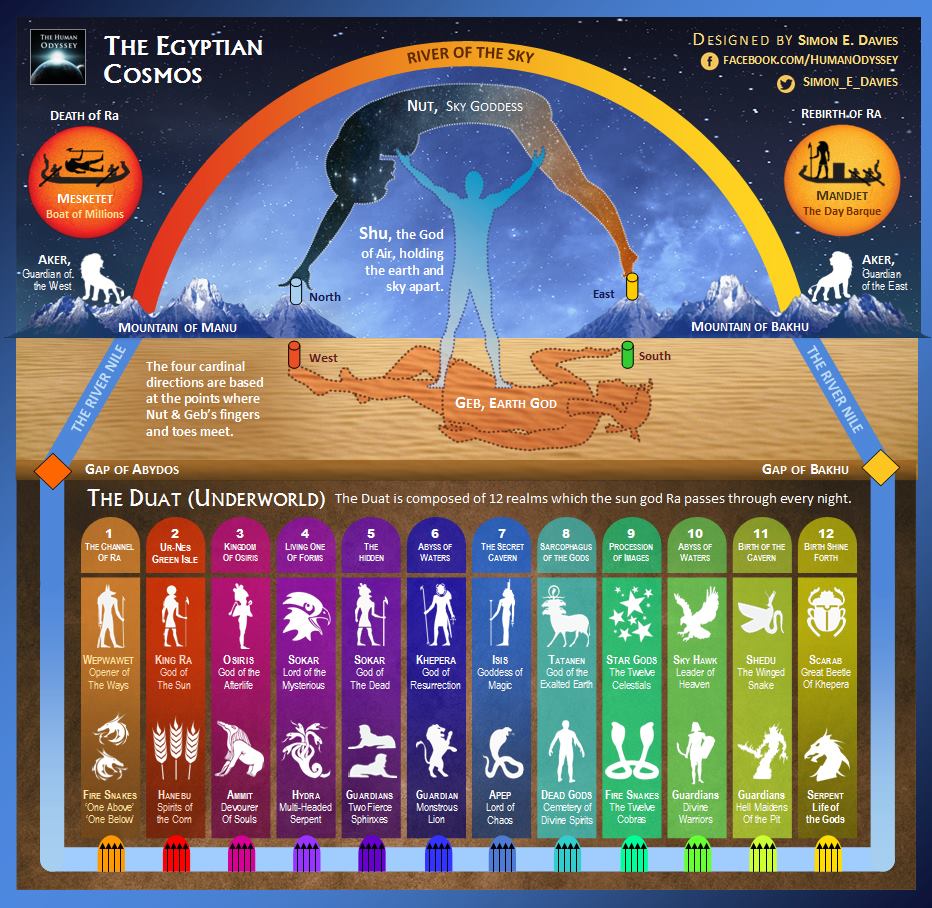 To bring order to this chaos, several gods made their home in the underworld, helping to guide the dead through its treacherous terrain. It is Ra, the sun-god, who helps bring balance to the cosmos, with the help of his fellow deities. He sails across the ‘River of the Sky’ in the day, resting in his boat known as Mandjet (the day barge). During the evening, he enters the underworld, and the boat would take on the name, Mesketet (the boat of millions).

As he descends into the netherworld, the body of Ra perishes, bringing darkness to the upper region of the Earth. A crew of lesser deities guard his body and steer the boat through the perilous underworld, in the hope of bringing him back to life.

The boats first stop is at the gap of Abydos, where the souls of countless humans board. They will be judged by Osiris who will determine their place in the afterlife. The Mesketet then sets off on its journey into the underworld, where it will pass through twelve gates, each chamber offering a challenge which must be overcome before Ra can rise again.

HOUR 1: At the ‘Watercourse of Ra’, Wepwawet, the opener of ways, unlocks the first gate, allowing the Ra access to the underworld. The boat passes six snakes whom the goddess Ba holds at bay.

HOUR 2: It is at ‘Ur Nes’, where Ra’s light nurtures the spirit of the corn so that it may flourish in the upper world, bringing health and abundance to his people.

HOUR 3: In the ‘Kingdom of Osiris’, the hearts of mortals are judged against the weight of a feather. If the weight of their sins causes the scales to drop all the way to the bottom, they are eaten by Amemt, devourer of souls.

HOUR 4: ‘Living One of Forms’ is a gloomy desert realm, presided over by Sokar, lord of the mysterious. The boat floats quietly over the sands, so as not to rouse a hydra which guards the realm.

HOUR 5: The boat of Ra passes into a ravine known as ‘The Hidden’. The way out is guarded by two sphinxes, whose riddles must be solved before the boat can move on. It is Sokar, god of the dead, who helps them solve the guardian’s secrets.

HOUR 6: At ‘the Abyss of Waters’, the boat drops into a great river. A monstrous lion prowls its banks, and further along they are joined by Khepera, god of resurrection, who later, will help to revive the body of Ra.

HOUR 7: ‘The Secret Cavern’ is a perilous realm, for Apep, lord of Chaos resides there. The great serpent tries to swallow the boat, but Isis, goddess of magic, uses her powers to banish the beast back into the abyss.

HOUR 8: ‘Sarcophagus of the Gods’ is the resting place of bygone deities. When the boat of Ra passes, they cry out and salute the sun-god, for his time to arise is close at hand.

HOUR 9: As the boat enters the ‘Procession of Images’, the river becomes savage and unruly. The 12-star gods help guide the boat away from fire-breathing serpents, back to safer shores.

HOUR 10: The boat now arrives at ‘Lofty of Banks’. A group of Divine warriors protects Ra as a great hawk, known as the ‘Leader of Heaven’, guides them toward the light. Khepera joins himself to Ra, in readiness for his resurrection.

HOUR 11: ‘Mouth of the Cavern’ is a land of life and death. Those mortals who were deemed evil in the third hour are cast into a pit, guarded over by goddesses of fire until they perish. Shedu, as a winged serpent, brings with him the promise of a new day.

HOUR 12: ‘The Birth Shines Forth’ is the final chamber, where Khepera resurrects the great king Ra. His waking form glides through the mouth of the great serpent known as ‘Life of the Gods’.

So it is that Ra is reborn, and the glory of the morning sun causes all people to cheer as his light returns to the upper region of Egypt.