Discovered in the 19 century—experts came across a mysterious artifact, resembling a modern-day ‘Drill Bit’ embedded within a seam of coal that was about 22 inches thick. The item was examined and described in the Proceedings of the Society of Antiquaries of Scotland, where experts concluded that the instrument was of a modern level of advancement. The coal in which the artifact was embedded in was millions of years old. 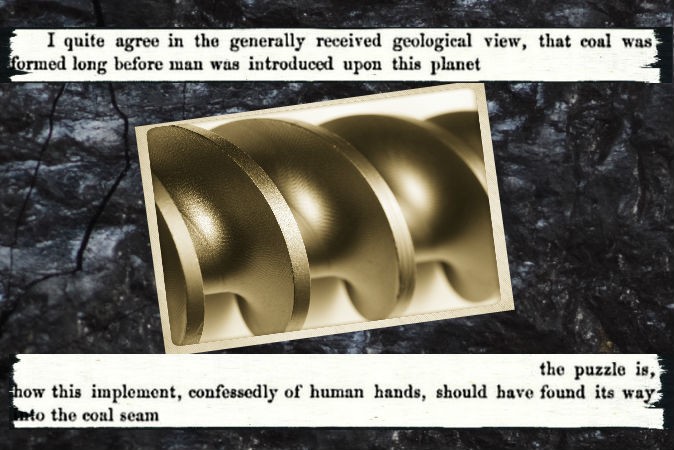 If there is anything that “describes” the term Forbidden archaeology than it must be this mysterious artifact discovered by researchers in the 19th century.

The artifact—which resembled a modern-day, man-made iron instrument— was discovered embedded in a large chunk of coal, suggesting that it was deposited in the organic matter that formed the coal before it became coal. The problem: The coal formed millions of years ago.

So how is this possible?

Does this mean that the conventional timeline of mankind’s origin is wrong?

If we take a look at the numerous OOPARTS (Out-of-place-artifacts) that have been discovered on Earth, we notice that many of them suggest the history of man’s origin needs to be revised.

There is evidence around the globe that our planet was inhabited by extremely advanced ancient civilizations before written history. The conventional view of history suggests that humans have existed in our modern form for around 200,000 years, but our species history can be traced back millions of years.

This “drill bit” was found in a large chunk of coal that formed hundreds of millions of years ago.

Is it possible that millions of years ago, an extremely advanced civilization—perhaps one resembling our own—existed on Earth?

The curious artifact was presented at the meeting of the Society of Antiquaries of Scotland on Dec. 13, 1852 by John Buchanan, Esq who is quoted saying: “I quite agree in the generally received geological view, that the coal was formed long before man was introduced upon this planet; but the puzzle is, how this implement, confessedly of human hands, should have found its way into the coal seam, overlaid as the latter was by a heavy mass of diluvium and boulders.”

Recorded in the Society’s proceedings are fully quoted below.

According to Buchanan, the mystery artifact was discovered within a seam of coal that was about 22 inches thick. The coal was recovered from a stratum of clay mixed with rocks, around 7 feet thick.

Upon examination, the Society agreed that the instrument recovered from the coal was of a modern level of advancement, however, they concluded that “the iron instrument might have been part of a borer broken during some former search for coal,” because no other explanation could have explained its origin.

Basically, they said it’s impossible for the tool to exist because the coal that contained the instrument was millions of years old. Mankind isn’t that old.

Interestingly, Buchanan’s report did not include any signs that the coal surrounding the mystery object was punctured by drilling.

He perfectly described a mysterious instrument that was bewilderingly encapsulated by coal.

Details about the mysterious artifact are recorded in the December 13, 1852, Proceedings of the Society of Antiquaries of Scotland (Volume 1):

“A communication was then read from John Buchanan, Esq., relative to the discovery of an iron instrument, lately found embedded in a natural seam of coal in the neighborhood of Glasgow. The instrument which was exhibited to the Meeting was considered to be modern. In his communication, Mr. Buchanan remarks: ‘I send herewith, for the inspection of the Society, a very curious iron instrument found last week in this locality. The interest attaching to this singular relic arises from the fact of its having been discovered in the heart of a piece of coal, seven feet under the surface.

To explain particulars, I beg to mention, that a new line of road, called the Great Western Road, was opened a few years ago, leading to the Botanic Gardens, which, you may be aware, are situated about two miles northwest from Glasgow. At a point on this new road are the lands of Burnbank, now in course of being extensively built upon. The person conducting these building operations is Mr. Robert Lindsay, wright and builder, a most respectable individual, well known to me, and on whose veracity implicit confidence may be placed. Now, when Mr. Lindsay came to excavate the foundations along the north side of the road for the range of houses, he cut through a bed of diluvium or clay mixed with boulders, seven feet thick, and then came on a seam of coal about twenty-two inches thick, cropping out almost to the very surface, and resting on freestone. It was necessary to remove this coal and cut into the stone below, which last was very opportune for building purposes.

A quantity of the coal so removed was carted over to Mr. Lindsay’s workshop or yard for use; and while his nephew, Robert Lindsay junior, an apprentice, was breaking up a block of the coal, he was surprised to find the iron instrument now sent in the very heart of it. At first, neither he nor the others about him could make out what it was, but after scraping and cleaning it from the coaly coating, it presented the appearance now before you. I send along with it a portion of the coal. Having been made aware of this discovery, I lost no time in seeing Mr. Lindsay senior; and accompanied him this day to the spot, and had the circumstances detailed to me by his nephew, and several of the respectable operatives who saw the instrument taken from the coal; and all of whom, Mr. Lindsay senior assures me, are persons whose statements may be implicitly relied upon.

The affidavits of five workmen who saw the iron instrument taken from the coal were also sent, and Mr. Buchanan further adds: ‘I quite agree in the generally received geological view, that the coal was formed long before man was introduced upon this planet; but the puzzle is, how this implement, confessedly of human hands, should have found its way into the coal seam, overlaid as the latter was by a heavy mass of diluvium and boulders. If the workmen who saw the relic disinterred are to be depended on (and I have no reason whatever to doubt their perfect veracity), then there may and must be some mode of accounting for the implement finding its way down eight or nine vertical feet from the surface.”