Early humans emerged on Earth around 4 million years ago, but new evidence arising from the study of human evolution has revealed compelling evidence that a small group of these hominins was genetically modified by ancient alien visitors to create the first Homo sapiens.

Researcher and author, Daniella Fenton, has been taking an in-depth look at the earliest origins of humanity and its sudden acceleration in brain development close to 800,000 years ago, this investigation has led to a massive revelation.

Homo sapiens are the creation of ancient astronauts that arrived through a wormhole from the Pleiades star cluster 780,000 years ago.

The Australian researcher, an expert in equine bloodlines and genetic expression, uncovered numerous genetic changes which mark humans as anomalous when contrasted with modern primate species, some are so extreme that they are best explained by advanced genetic engineering. 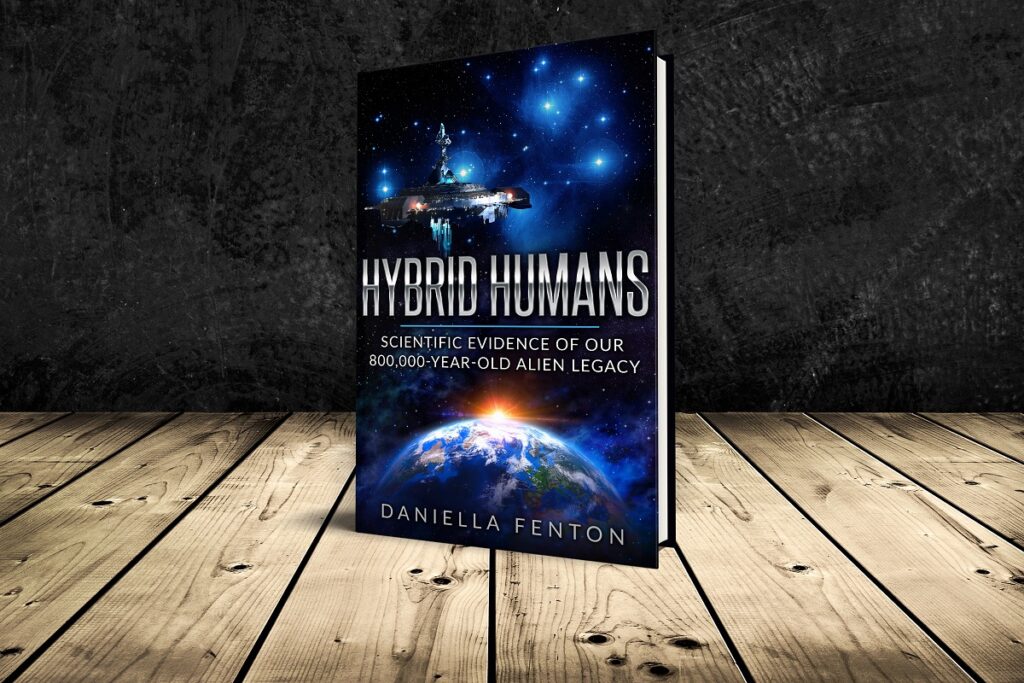 In her book, titled ‘Hybrid Humans: Scientific Evidence of Our 800,000-Year Old Alien Legacy’, Daniella Fenton highlights a series of profound changes in the genes associated with brain size, neural structures, and information processing. These changes include genes that appear suddenly fully formed out of so-called ‘junk DNA’ and fragments of genes that have been snipped out, copied and re-inserted.

Fenton points the mysterious fusion of Chromosome-2 at the same time as these other changes, around 780,000 years ago, as further evidence of extraterrestrial experimentation. This fusion is found in all large-brained human types, including Neanderthals and Denisovans, but not in any other primate species.

She explains that the fusion of chromosome-2 should have been a one-off error that disappeared in the subsequent generation or perhaps led to a small population of people with 46 chromosomes among a more substantial number of those carrying 48. Instead, all humans after 780,000 years ago exhibited the ‘mutation’. This strongly infers that there was an enormous benefit associated with the fusion and that it appeared suddenly in a considerable number of individuals, allowing chromosome-2 to become a permanent and dominant trait. This does not fit with known natural mutations in the human genome.

Fenton explains, “Somebody created an entire generation of breeding pairs that carried the fusion of chromosome-2. The chromosome modification is such that it would have impacts on the brain development, the immune system and reproductive processes.”

Humans also carry unique changes in the gene FOXP2 that changed synaptic connectivity and enhanced our ability to transform new experiences into routine procedures, this had enormous influence on our ability to produce meaningful speech. Fenton points out that this change is not observed in other primates and it appears our creators wanted us to be able to quickly form new habitual behaviors particularity language use.

Fenton said: “It is not just the genetic changes 780,000 years ago which inform us Homo sapiens is a species created by alien beings, we have also identified physical material left behind by these star people, materials dated to that same specific point in time.”

Fenton offers a detailed explanation for why these visitors ended up marooned here and the motivations which led them to modify early hominins in her book Hybrid Humans: Scientific Evidence of Our 800,000-Year Old Alien Legacy.