Was Göbekli Tepe Erected As A Cosmic Observatory Where Sirius...

The world’s oldest temple, Göbekli Tepe in southern Turkey, may have been built as a massive cosmic observatory, and the builders may have worshiped the dog star, Sirius.

The megalithic enclosures of Gobekli Tepe (Urfa, Turkey) are the most ancient sacred structures of stone known so far, dating back to the 10 millennium BC. The possible presence of astronomical targets for these structures is analyzed, and it turns out that they may have been oriented, or even originally constructed, to celebrate and successively follow the appearance of a new, extremely brilliant star in the southern skies: Sirius.

Sirius, in the constellation Canis Major), is the brightest star in the sky and has been worshiped by numerous ancient civilizations throughout history. The star was so important that the ancient Egyptians for example, based their calendars on this star coinciding with the flooding of the Nile.

They were historically the period following the heliacal rising of the star Sirius, which Greek and Roman astrology connected with heat, drought, sudden thunderstorms, lethargy, fever, mad dogs, and bad luck.

But numerous ancient civilizations thought this star was of great importance. 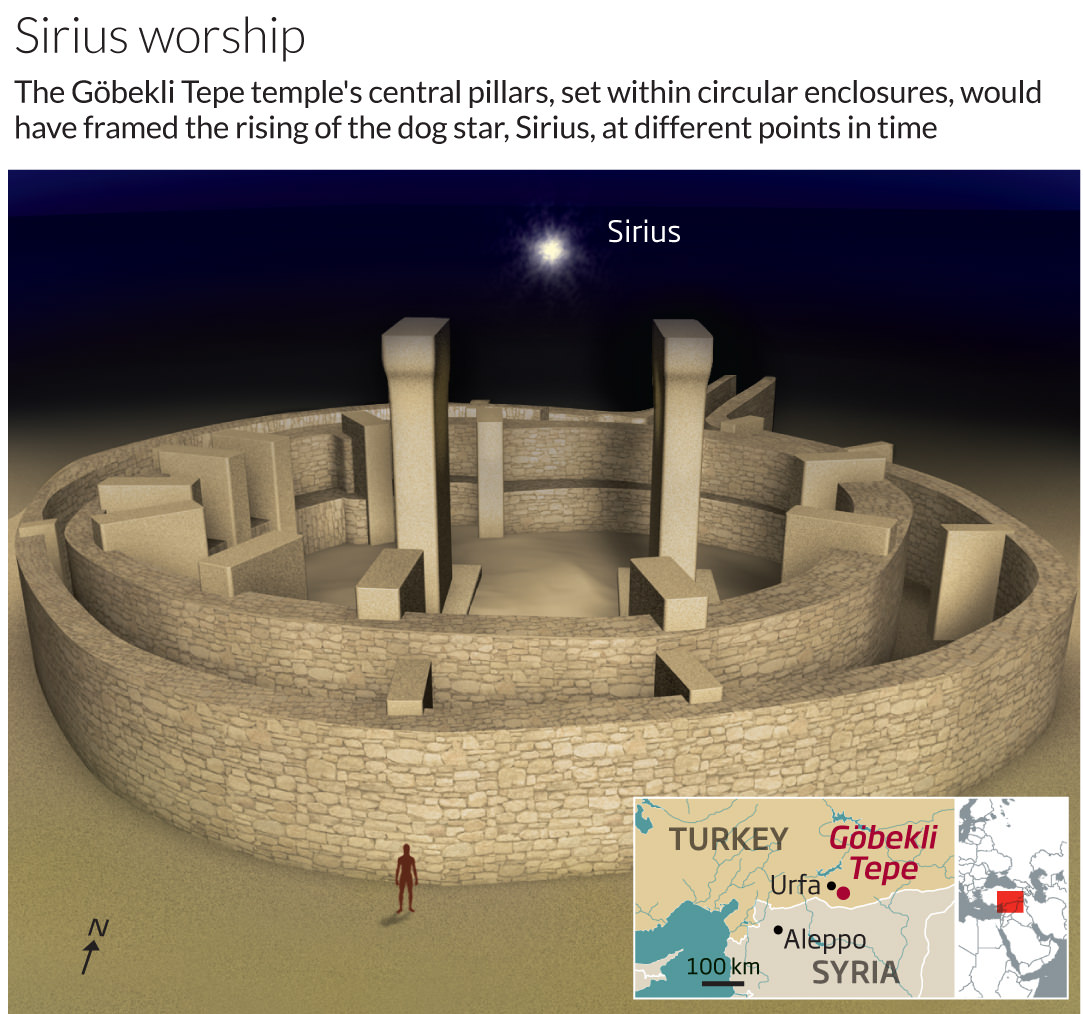 The Dogon, for example, knew of the existence of Sirius, and they believed that the brightest star in the sky, Sirius (sigi tolo or “star of the Sigui”), has two companion stars, pō tolo (the Digitaria star), and ęmmę ya tolo, (the female Sorghum star), respectively the first and second companions of Sirius A.

In addition to all of these incredible details, we must turn towards Göbekli Tepe and the possibility that the builders of one of the oldest temples on Earth may have based their religion and beliefs around the worship of Sirius.

Göbekli Tepe, in the south of Turkey, is a site believed to date back more than 11 thousand years. It’s an ancient temple that features a series of 20 courtyards surrounded by T-shaped stone pillars, in which animal figures and other elements were inscribed.

In the center of these constructions are two parallel megaliths, which have aroused the interest of scholars, who are trying to fully understand what the curious placement of the pillars means.

Göbekli Tepe has radically modified the ideas maintained by archaeologists about the origins of civilization and human culture.

Previously it was believed that agriculture had triggered the impulse to establish a sedentary civilization and develop art and religion. However, many authors and scholars believe that the builders of Göbekli Tepe were mere hunter-gatherers.

Beyond the fact that there are much older art motifs and religious manifestations, the findings at Göbekli Tepe show that temples were built and settlements were established before the development of agriculture (at least, no indications have been found that agriculture was developed near Göbekli Tepe).

In other words, nomadic hunters developed architecture, art, and religion, and they did so with a big bang.

According to archaeoastronomer Giulio Magli, this temple could have been built as an observatory and as a place of worship for the star Sirius.

“I propose that the temple was built to follow the ‘birth’ of this star,” says Magli. “You can imagine that the appearance of a new object in the sky could even have triggered a new religion.”

This star, due to the precession of the Earth’s axis, would have been below the horizon in that area, until in the year 9300 BC. and would have emerged with lavish splendor.

With the help of existing maps of Göbekli Tepe and satellite images of the region, Magli drew an imaginary line running between and parallel to the two megaliths inside each enclosure.

The temple could have been built around the “birth” of this star and, even, its religion could have centered around this brilliant star.

Despite the exciting development in understanding Göbekli Tepe, the results are preliminary, Magli stresses.

The archaeoastronomer believes that more accurate calculations will be needed, and a full survey using instruments such as a theodolite, a device for measuring horizontal and vertical angles needs to be performed.

Also, the expert notes that the sequence in which the structures at Göbekli Tepe were built remains unclear, meaning it is hard to say if Göbekli Tepe’s rings were built to follow Sirius as it rose at different points along the horizon.

Source: Sirius and the project of the megalithic enclosures at Göbekli Tepe