Have Researchers In China Found A 300 million-Year-Old Screw Embedded...

According to reports from Chinese News agencies, a mysterious object discovered in 2002 could be evidence of prehistorical civilizations.

The Lanzhou screw is believed to be similar to the one found in Russia in the 90’s.

Researchers from numerous Chinese laboratories have studied the item.

The Lanzhou screw is another mysterious object discovered in recent years that seems to challenge mainstream archaeology and history. It was discovered in 2002 and has since generated a great amount of attention among collectors and researchers. The most mysterious part of this object is that within the piece of rock, a metal screw was discovered. The mysterious pear-shaped stone is about 6×8 cm and weighs around 466 grams. But it is not a common rock and the metal shaped screw just adds to the mystery of the rock that according to researchers is around 300 million years old.

As a matter of fact, the mysterious rock has geologists scratching their head. Tests have failed to show the exact composition of the mysterious rock, researchers that include geologists and physicists from the National Land Resources Bureau of Gansu Province, Colored Metal Survey Bureau of Gansu Province, the Institute of Geology and Minerals Research of China Academy, Lanzhou Branch, and the School of Resources and Environment of Lanzhou College are unsure of the origin of the artifact and point out that at this time, all theories are possible.

According to Lanzhou Morning News; After a discussion about the possibility of being man-made and the possible reasons for its formation, scientists unanimously labeled the stone as one of the most valuable in China and in the world of collection, research and Archaeological studies.”

Numerous theories were proposed trying to explain the origin of the mysterious rock and the embedded 6 cm cone-shaped metal bar which bears clear screw threads. While most researchers firmly believe this artifact to be the remains of a prehistoric civilization, other researchers suggest that given the mysterious composition of certain elements of the rock, there is a possibility that both the rock and mysterious metal screw could have originated on another planet. 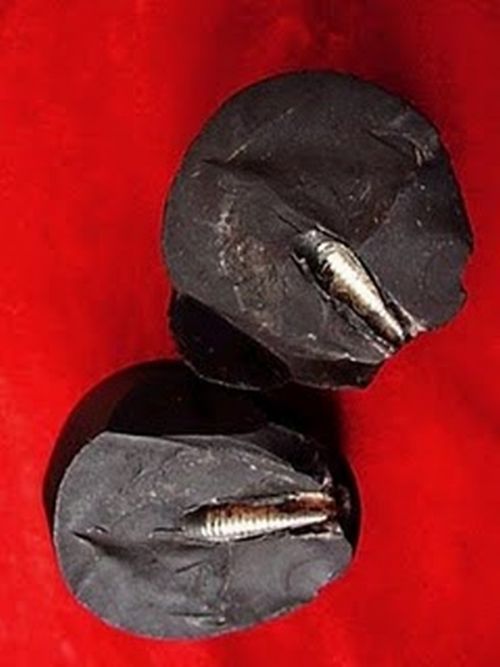 After many studies, Chinese scientists concluded that the artifact had not been made by contemporary hands or by current technology levels, the most accepted hypothesis is that it is a product of a prehistoric civilization. Despite various opinions, researchers have not been able to confirm if the screw was forged from a metallic material or from some other material. Researchers from the Institute of Geology and Minerals Research of China Academy suggest that the mysterious body of the Lanzhou screw was made before the rock that contains it solidified, a process that is believed to have taken place 300 million years before the present era.

It is most likely that there is something missing in the distant history of mankind. History and archaeology are clearly not reflecting the entire picture of our past and objects like the Lanzhou screw are proof of it.

According to researchers, 300 million years ago, the super-continent Pangaea formed. It is during that time that the Lanzhou screw was believed to have been created, curiously, the Lanzhou screw has a similar history to the screw discovered in Russia in the 90’s. The Russian screw, also embedded into rock, was found by chance as researchers were performing analysis after the fall of a meteorite in the Kaluga region when they came across a mysterious object that resembled a modern-day screw.

Tests performed on the mysterious rock from Russia demonstrated that there are several screws embedded into the structure. Curiously, the age of the Russian screw is believed to be an exact match to the one found in China.

Discoveries like this are anything but uncommon as this object belongs to a list of other out-of-place artifacts that have been discovered in the last years. All of these discoveries point towards the possibility that our history and origins have been completely wrong.

It is quite likely that millions of years ago, the  Earth was completely different home to a species much different to ours today. Objects like the ones found in China and Russia point toward the possibility that advanced civilizations might have existed millions of years ago on our planet. Mainstream Archaeology and history will continue to deny these findings since they are capable of rewriting history and our origins as we know it.

Do you think its possible that artifacts like the ones found in Russia and China are the remains of prehistorical advanced civilizations? Changing the way we look at our past and history might help us understand what the true meaning of these artifacts is.