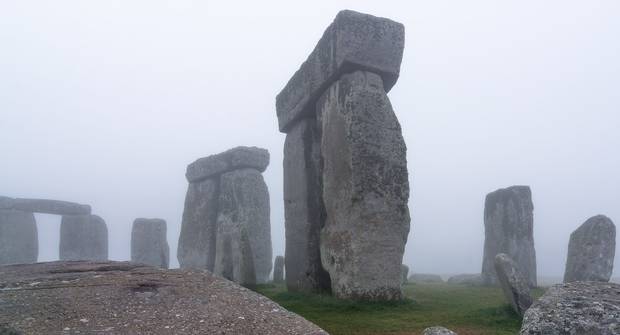 In a groundbreaking news release, archaeologists have finally released the results of a four-year-long project to map the “hidden” landscape beneath the Stonehenge environs. Using powerful ground-penetrating radar, which can ‘X-ray’ archaeological sites to a depth of up to four metres, investigators from Birmingham and Bradford universities and from the Ludwig Boltzmann Institute in Vienna have discovered a 330-metre long line of more than 50 massive stones, buried under part of the bank of Britain’s largest pre-historic henge.

The results are truly amazing as hundreds of megalithic monuments, chapels and shrines have been found around Stonehenge.

Another massive megalithic monument composed of 60 giant stones stretched out along a 330-metre long c-shaped enclosure has been revealed thanks to their high end devices used to map the ground beneath.

“This is not just another find,” said Professor Vince Gaffney of the University of Birmingham. “It’s going to change how we understand Stonehenge.”

In addition to this amazing discovery, the archaeological team found over 60 previously unknown pre-historic monuments scatter across Salisbury Plain, including 20 large ritual pits up to 5 metres in diameter, 8 previously unknown Bronze Age burial mounds, 4 Iron Age shrines or tombs, 6 Bronze Age and Iron Age livestock enclosures, and 17 other henge-like Neolithic and Bronze Age structures, each between 10 and 30 metres in diameter. Some may well have consisted of circles of large timber posts – wooden equivalents of conventional prehistoric stone circles.

“It shows that, in terms of temples and shrines, Stonehenge was far from being alone,” said Professor Gaffney. 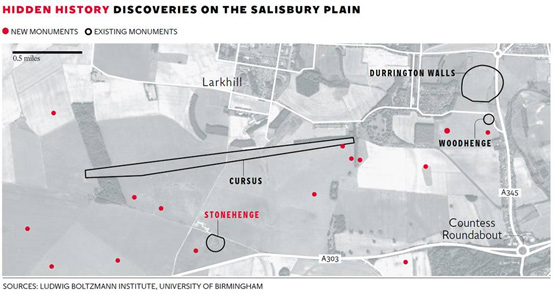 his incredibly discovery has been announced ahead of a two-part special BBC Two documentary titled ‘Operation Stonehenge: What Lies Beneath’, in which the research team will release the full extent of their findings.