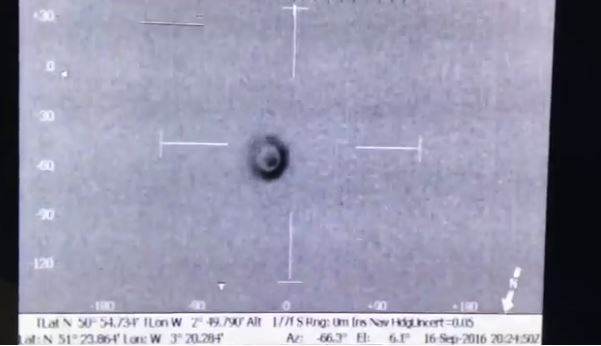 According to statements from NPAS, the UFO was traveling AGAINST the wind and was ONLY VISIBLE in thermal imaging, as the object was releasing a huge amount of heat.

While there are many pilots’ statements about strange encounters with unidentified flying objects, it is not uncommon for a state institution to publicly reveal recordings with UFO’s in midair.

Last week, the National Police Air Service of St. Athan posted on their Twitter account a video of an encounter with a UFO, filmed by one of their Helicopters equipped with a thermal imaging camera, a technology that detects infrared radiation.

Any suggestion?? Nothing seen by local ATC… ??? pic.twitter.com/Hu07DLmn3z

Numerous questions were asked, and there are very little answers.

What we do know –thanks to the responses of the National Police Air Service of St. Athan on Twitter— is that the incident occurred while one of their helicopters was returning to base, when the crew spotted  a mysterious ‘spherical’ object and followed it for about seven minutes.

“We really don’t know but doubt it was a lantern as it was going into the wind.

“It was pitch-black. [The pilot] tried on day camera, but nothing seen. This clip is just a small part of the video.

“It was on Saturday night about 21:30 and was spotted over the Bristol Channel at approx. 1000ft.

“Really difficult to judge the size but we filmed it for just over 7 minutes as we were coming back into land.

“Only slight problem is the amount of heat and it was travelling into wind?

According to statements of one of the helicopter pilots, the UFO was traveling AGAINST the wind at a very high speed. The UFO was not visible when the crew changed their camera to daylight mode.

According to reports, the UFO emitted a massive amount of heat and could only be seen in infrared –which precisely detects thermal energy to create the “image” that we see in the video.

This statement allows us to rule out some very likely explanations.

According to many, due to the fact that the UFO was traveling against the wind, and was ONLY visible in thermal imaging, we can say for certain that it wasn’t a Chinese lantern as many have proposed on social networks. Also, the object filmed by the police wasn’t a hot air balloon.

Another point worth highlighting, in this case, is that the video posted on the Twitter account is not the original footage, but a film of the same video as it was played on a police monitor. This has led many researchers to request that the NPAS releases the original video in order to analyze it better and understand what we are dealing with.

Similar sightings of UFO’s visible only by infrared have been made in the past.

One of such sightings was analyzed by the Scientific Coalition for Ufology –a group of people who have an extensive and long background in science and decided to look at UFOs from another perspective.

The Scientific Coalition for Ufology analyzed a video recorded by Homeland Security by a thermal imaging camera on a DHS aircraft, in the sky over Aguadilla in Puerto Rico. Ufologists believe that this is the best evidence of UFOs monitoring our activity on planet Earth.