The enigmatic 600-year-old mystery figures of Karajia Peru will leave...

The enigmatic set of figurines are in fact heritage belonging to a lost civilization, dating back to the 1400s.

In ancient times, the respect and worship of the deceased belonging to the Chachapoyas Culture, from the Amazonas in Peru, surpassed exceptional frontiers.

The Chachapoyas culture also called the “Warriors of the Clouds”, was a culture of the Andes living in the cloud forests of the Amazonas Region of present-day Peru.

The Inca Empire conquered their civilization shortly before the Spanish conquest in the 16th century. At the time of the arrival of the conquistadors, the Chachapoyas were one of the many nations ruled by the Incas.

The sarcophagi of Karajía, or Carajía, are a set of anthropomorphous sarcophagi or coffins according to the funerary tradition of the Chachapoyas. These massive burial structures stretch up to 2,50m in height and were created to mimic human forms.

They were discovered in the Karajía ravine in the Luya district of the Department of Amazonas, Peru in 1985 by the Peruvian archaeologist Federico Kauffmann Doig thanks to the references provided by Carlos Torres Mas.

The Karajia sarcophagi are unique in their genre for their colossal size, as they stretch up to 2.50 meters in height. The figurines are noted for their careful elaboration.

The fact that they were located at the top of a ravine difficult to access, has allowed them to remain nearly intact for centuries, avoiding damage and looting.

Thanks to the support provided by members of the Peruvian Andean Club, archaeologists were able to climb 24.00 meters of a vertical rock wall and access the cave where the sarcophagi are located, around 200 meters from the bottom of the ravine in order to research the sarcophagi.

Karajia-1 is made up of seven sarcophagi.

The third collapsed probably during the 1928 earthquake, disappearing into the abyss.

As the sarcophagi are laterally linked to each other, the one that collapsed created openings in the sides of the contiguous ones.

This fact allowed experts to see in detail the content of these sarcophagi and to determine interior of the remaining ones without having to open or damage them. 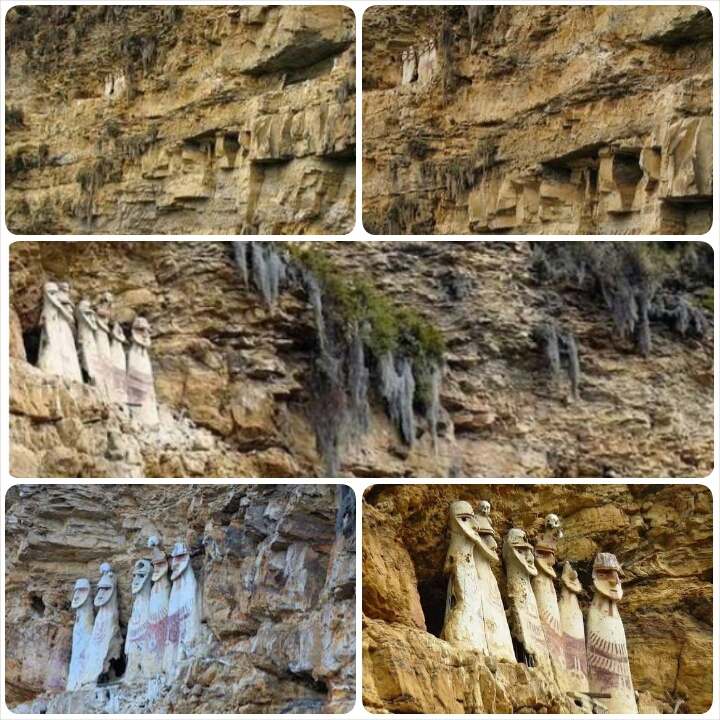 The interior of the Sarcophagi

Inside the open sarcophagus, experts found a mummy sitting on a hide and wrapped in mortuary cloths.

According to experts based on radiocarbon dating, the mummy dates back to around 1460. 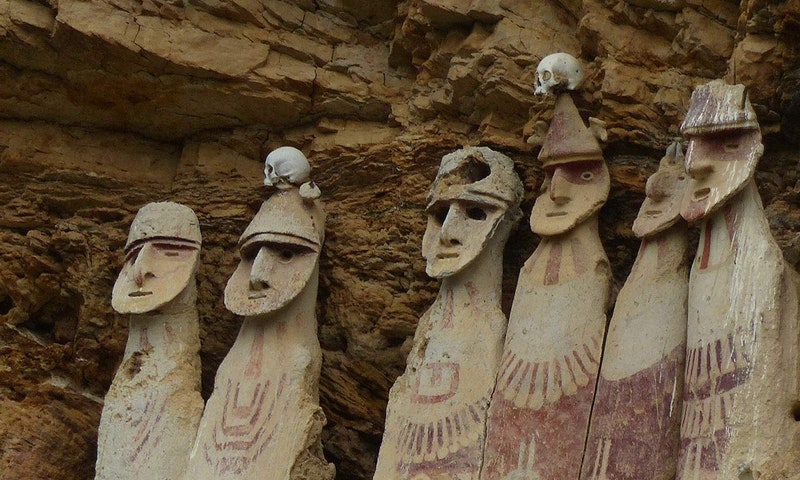 The sarcophagi are composed of large anthropomorphic capsules made of clay mixed with small branches and stones, applied on a structure of reeds or branches. Only the head and part of the chest are compact. Both body and head are decorated with two-tone red paint, applied on a white base.

The ancient sarcophagi are considered to be evocations of the typical form of the coastal funerary bundle corresponding to the Huari period.