The incredible similarity between the Coricancha Temple in Peru, and...

The Coricancha (in Quechua: Quri Kancha, ‘golden temple’) is a political, and religious Inca temple of the geographic center of the city of Cuzco, in Peru.

The word Coricancha (also written as Qorikancha) is formed by the union of two Quechua words: “Kori / Cori” which means gold and kancha / court, temple or enclosure.

According to researchers, the original name was “Intikancha”, and is related to the God Inti and the golden color of its interior, referring to the sun.

It is not clear exactly in what year the construction of the temple began, but it is speculated that it dates back from the period of the Ayamarcas.

In the year 1438, when assuming power the ninth Inca, Pachacuteq, remodeled the entire city, and later renamed the temple to Qorikancha (which is the current name).

According to the Inca conception, the Qorikancha was the religious, geographic and political center of Cusco, and was so imoprtant that Garcilaso de Vega and Cieza de León, describe it as the temple “covered in gold”: Its floors and walls, including the garden, had animals and plants of real size, made of pure gold.

The temple, the materials, and the technique are very similar to that of Sacsaywamán or Machu Picchu, except that here the Megalithic style is not so heavily presented. Here we see an imperial style with regular rigging in parallelepipeds; the predominant element is the andesite stone.

The remnants of Coricancha are considered a marvel of Incan architecture.

In fact, experts to this day are unsure as to how the ancient Incas managed to create such perfectly shaped walls.

Modern engineers say the precision of the stonework rivals that being produced today with advanced machining.

However, the Inca weren’t the only ancient civilization to achieve such building proficiency.

If we travel some 6,500 miles at the other side of the world, in Giza, Egypt, we see the same signature building techniques at the Valley Temple next to the Sphinx.

Coincidence? I wouldn’t say so. Rather the same blueprint.

Imagine for a second standing in front of the Sphinx temple in Egypt while observing the incredible ruins of the ancient temple. Then–imagine–you close your eyes and when you open then, you end up at the Coricancha temple in Cusco. The styles are so similar that if you did not know where you were standing at a precise moment, you couldn’t tell the difference between the two, due to the fact that the building styles of those two temples are eerily similar.

The similarities between the two temples tell a story that most of us have failed to hear.

Both temples feature incredible blocks fitted together so tightly that you cannot fit a single sheet of paper in between them. However, as noted by many researchers and authors, what makes these temples even more fascinating is the size of the stones used in their construction.

In fact, some of these blocks are so large that even engineers today would struggle to put them into position.

The limestone blocks at the Valley Temple are estimated to weigh around 200 tons each.

Somehow, the ancient builders managed to lift these massive stones and place them with incredible precision to hights of around 40 above the ground, or the height of a four-story building. 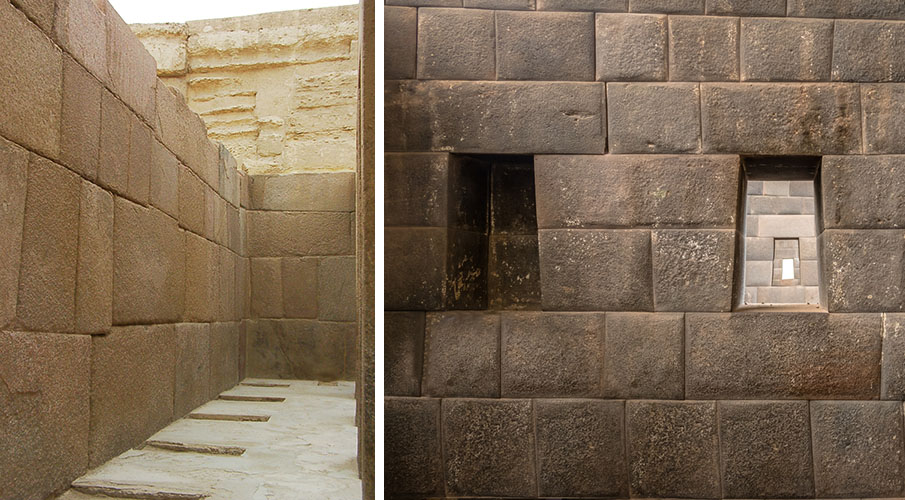 Interestingly, this was not merely accomplished at these two sites. There is ample evidence of similar sites around the globe.

Across the globe, ancient cultures chose repeatedly, to build similar awe-inspiring blocks fitted together with such a precision that modern-day engineers are left awestruck, and all of that using supermassive stones and most important, without the use of mortar.