The Orisha And The 12 Gods Of Yoruba Mythology

At the beginning of Yoruba mythology, the universe was composed of two elements, the ethereal sky above and a watery chaos below. Two gods rule over both these primordial realms.

Olokun presides over this watery abyss, an aquatic realm populated by sea spirits. As master of the deep, he has a great insight into the mysteries of nature. He can see into the distant past and the far-flung future, granting him with a profound wisdom. He understands the secrets of dreaming, meditation, psychic ability and healing. Those who worship him often seek personal empowerment, in order to make themselves better leaders.

The heaven realm is the domain of Olorun, a sun god. He is known as the omnipotent ruler of the Yoruba pantheon, whose light brings life and vitality to all living things. He takes an active role in the affairs of both heaven and earth. Olorun had two sons, Obatala and Oduduwa, who helped him develop the features of the Earth. 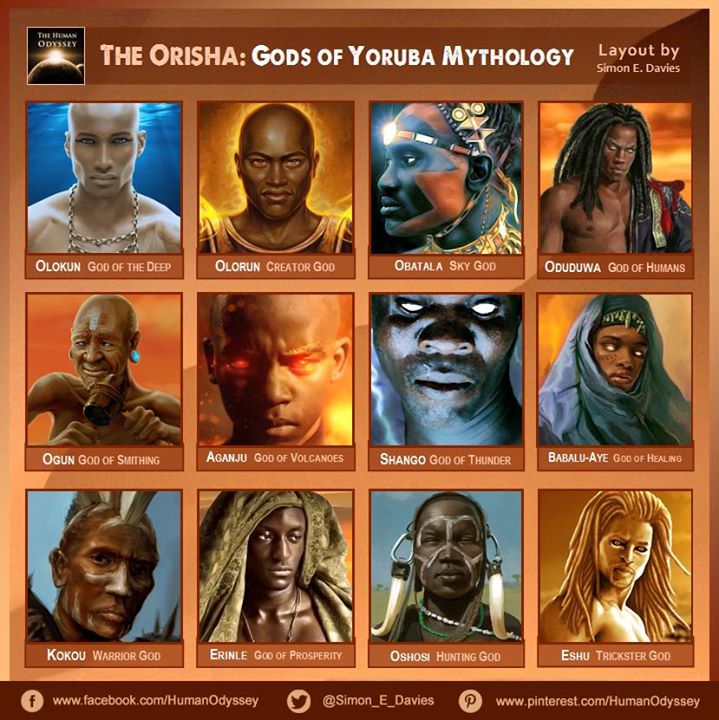 His youngest son, Obatala, asked if he could create a new realm made of earth. Olorun agreed and gave Obatala a shell to help fashion this new world. The shell contained a magical soil and a divine cloth. Using these sacred materials, he created fields, forests, hills, and valleys. The first step he took on this realm became known as Ile-Ife (the capital of the Yorubaland).

Obatala then began to build a city, but after discovering alcohol (brewed from palm leaves) he became distracted from duties. Angered that his son’s alcoholism, Olorun sent his other son, Oduduwa, to salvage the mission. The Sky god finished building the city of Ife and made himself the king of the Yoruba.

Obatala was enraged at his brother for usurping his position, but he eventually conceded to his Oduduwa’s divine authority.

Olorun eventually forgave his son and gave Obatala the responsibility of creating the human race (which he brought into being via his breath of life). Oduduwa joined with the humans and begat a new bloodline of kings (the Yoruba called him Ooni of Ife, the progenitor of the Yoruba people).

As the people began to reproduce, new lands were required for them to settle. Olorun sent them Ogun, god of crafts, to find a suitable habitat. He taught his followers the secrets of civilization (fire, smithing, hunting, politics, and war). After passing on his secrets and guiding humanity for many years, Ogun grew old. As an immortal, he was unable to die, so he chose instead to descend into the earth’s surface, in a place named Ire-Ekiti. Ogun is revered as a mighty god, called upon by warriors for strength in battle.

Aganju was the next Orisha to manifest on earth. He embodies the power of the sun, essential for the growth. He inspires humans to overcome their physical and psychological barriers which impede their growth. Like the volcano, Aganju is noted for his legendary strength and his ability to bring about drastic change. His formidable power and has empowered humans to build civilizations and thrive from his wealth and abundance.

In some traditions, Aganju is seen as the father or brother of Shango, god of thunder and lightning. Shango was the third king of the Oyo Kingdom. He reigned for seven years, constantly waging battle against other nations, bringing prosperity to the Oyo Empire. His reign ended when he inadvertently destroyed his palace with lightning.

During his lifetime, he was married to three wives (Oshun, Oba, and Oya).

Babalú-Ayé (originally Shopona) is a healing god. In his early days, he was very hostile, inflicting disease upon those who transgressed him. The Orisha began to lose patience with him, especially when he tried to infect them with smallpox after they laughed at his deplorable dancing skills. Luckily, Obatala exiled him to the wilderness, where he has lived as an outcast. In isolation he learned humility, becoming Babalú-Ayé. He is now viewed as a compassionate and humble deity, curing people of sickness and disease.

Kokou is a warrior god, renowned for his violence and ferocity. He is the most feared of the Orisha.

Rituals invoking his spirit require the rapid beating of drums, which often cause his followers to fall into a deep trance. Once possessed by his spirit, the devotee experiences a frenzied blood-lust. These devotees often commit violent acts of self-harm to demonstrate their tolerance to pain. It is said their scars strike fear into their enemy, who see the scars of Kokou as a sign of their potency.

Erinle is a wilderness god, associated with hunting, herbalism and animal husbandry. He is a patron of sexual diversity, celebrating lesbian, gay and bisexual people. He is said to live in the forest with his Orisha brothers part of the time. The rest is spent in the farm with Oko (a farming god). He is envisioned as an extremely wealthy deity, dressed in refined garments, adorned with coral beads and plumage from a hunted game.

Oshosi is also a hunting god, who is highly regarded for his quick wit and objectivity. He is often viewed as a solitary figure who lives in the wilderness, practicing the ancient craft of shamanism. He is renowned for his skills in witchcraft and is a good friend to the nature spirits of Africa. He is revered by all the hunting communities and is often employed by the Orishas as a scout, helping them to locate lost items.

Finally, there is Eshu, a trickster God, and patron of crossroads. He represents the power of fortune. His most notable role is that of the psychopomp (guardian of the dead). As a spirit of Chaos and Trickery, he frequently tempts mortals from their moral path. Rather than willfully trying to misguide them, his aim is to enrich their life experience, leading them to a spiritual maturation through their transgressions. In this way, he is certainly a difficult teacher, but in the end, is usually found to be a good one.