Third Eye In The Ancient Americas

Scholars of Eastern religions recognize the Third Eye as having a long history in India, China, and Asia, where Hinduism, Buddhism and Taoism hold sway. Strangely, the Third Eye is ignored by archaeologists of New World cultures, despite extensive evidence of Third Eye symbolism in ancient American artwork. Are the following Third Eye images from the New World (that author Richard Cassaro has researched and collected during the past two decades) the key to unlocking the religions of the Maya, Olmec, Aztec, Inca, pre-Inca, and other ancient American cultures? 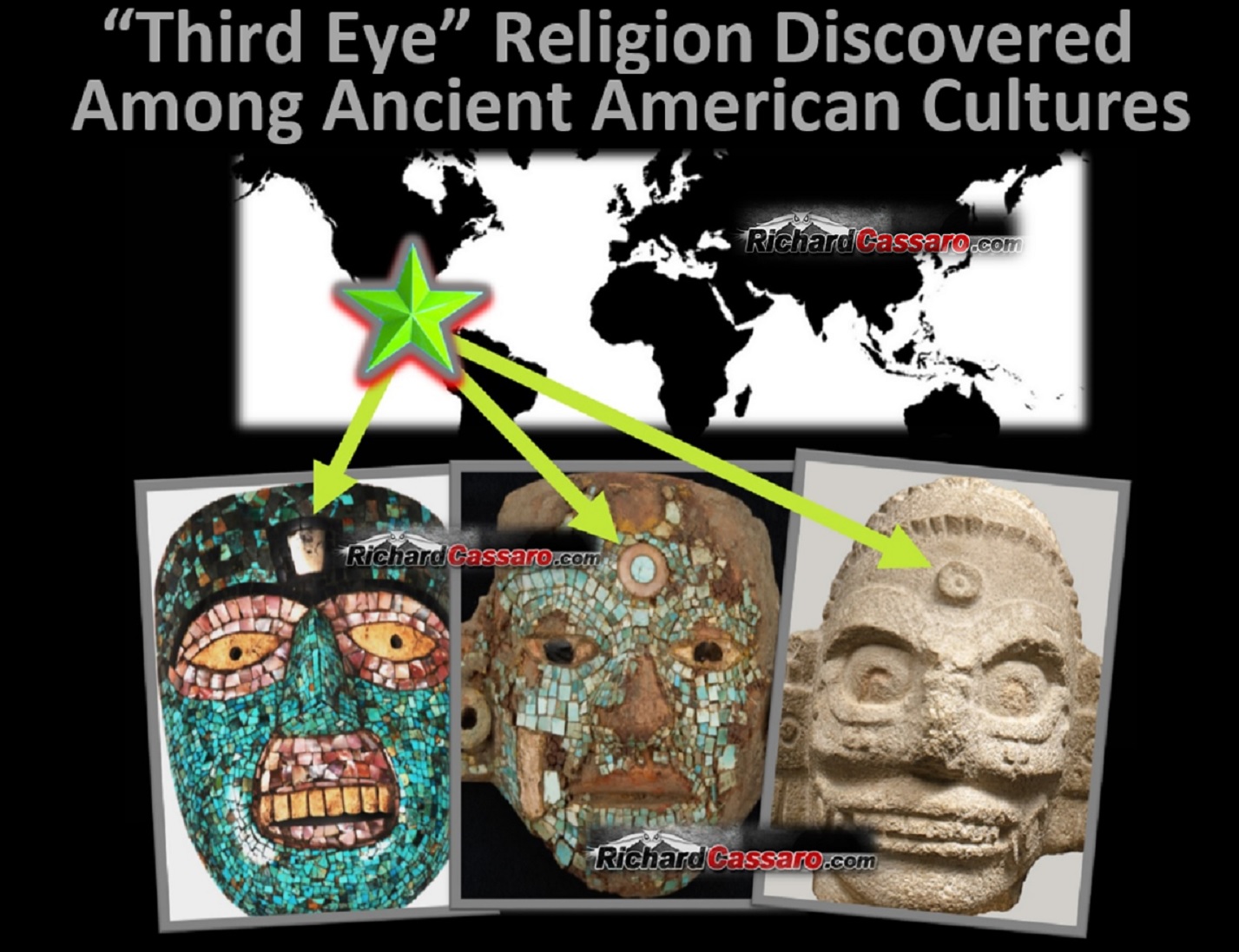 The Hermetic tradition teaches that during a long-ago Golden Age, our ancestors had a “Third Eye” in the center of their foreheads. As humans evolved, this Third Eye atrophied, becoming the modern “pineal gland,” located precisely at the geometric center of the human brain. Today the Third Eye organ no longer works in our daily lives and must be intentionally “awakened.” This awakening can be achieved through the ancient practice of “Yoga,” a system of holistic health traced to the Indian sub-continent.

A specific type of yoga called “Kundalini Yoga,” virtually unknown in the West, is particularly structured to help seekers awaken the Third Eye and find the “higher Self” or “soul within” (called “Atman” in India). Kundalini is an ancient Sanskrit term denoting the “illumination” or “enlightenment” one experiences during the discovery of the soul. Though mystics and adepts speak of the mysterious powers the Third Eye endows us with (i.e., higher consciousness, greater perception, clairvoyance, expanded capacity for self-healing), on a simpler level the Third Eye denotes spiritual insight, providing us with a vision of our inner soul or higher Self, our true eternal being.

Readers familiar with Eastern religions will recall the Third Eye as having a long history in India, China, and Southeast Asia, where the religious traditions of Hinduism, Buddhism and Taoism hold sway. The Third Eye is known throughout the Indian sub-continent as the “urna” or “trinetra,” and is often marked by a dot in the middle of the forehead, above and between the eyes. 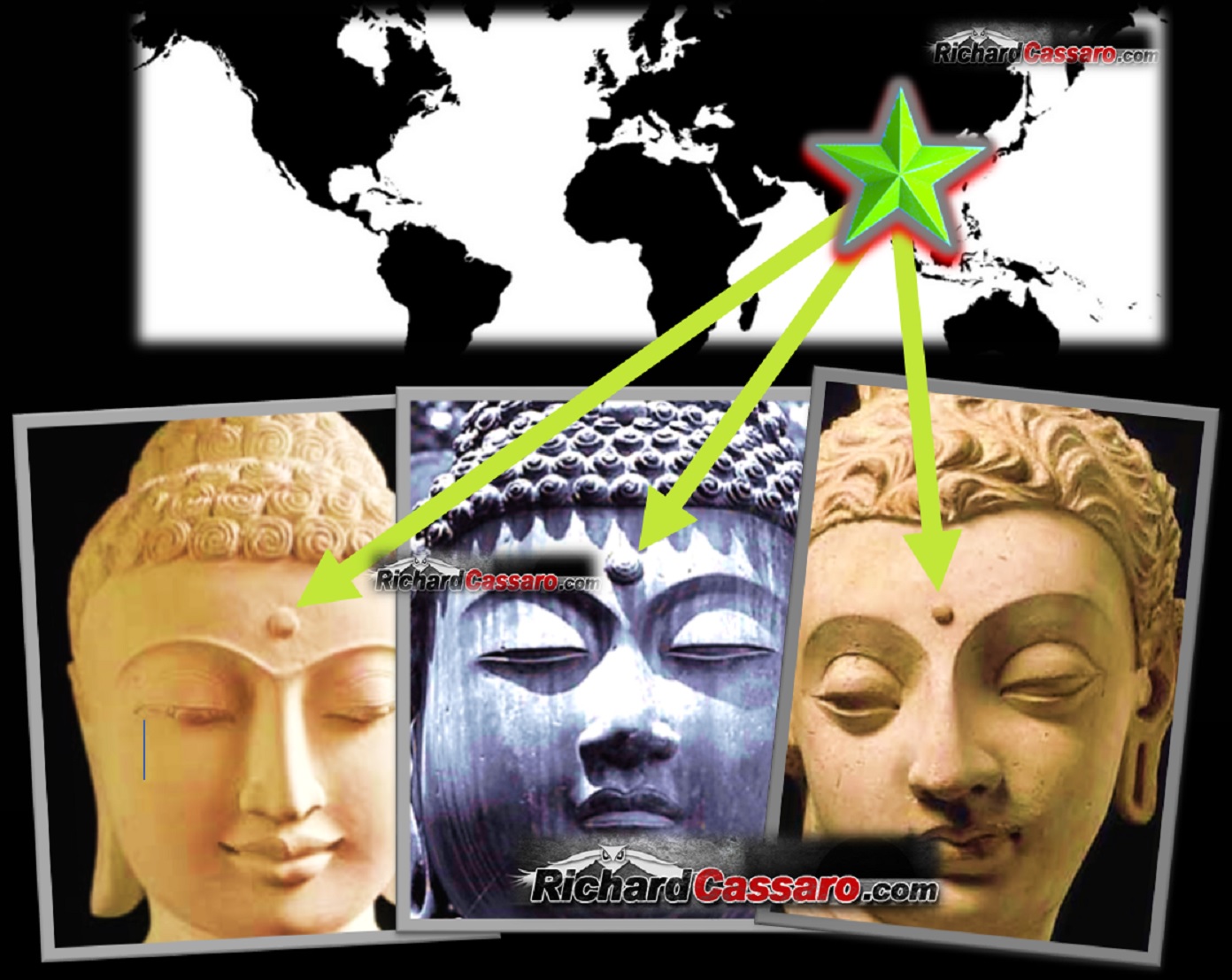 Third Eye symbolism in the Eastern Hemisphere, known to scholars.

Richard Cassaro, author of Written in Stone (2011), has spent three decades traveling and studying ancient cultures. During this time, he discovered a mass of convincing graphic evidence that the same symbolic Third Eye “forehead dot” present in Hinduism, Buddhism and Taoism is also abundant in the archaeology of ancient New World civilizations.

Cassaro found this Third Eye symbolism among cultures that evolved and flourished in present-day Mexico, Peru, Columbia, Panama and even the United States (i.e., the Olmec, Toltec, Maya, Zapotec, Aztec, Inca, pre-Inca, and Mississippian cultures, among others).

Many examples don’t necessarily depict a “forehead dot,” but nevertheless still express Third Eye symbolism. For example, in Peru, the Inca king was often depicted in art with a semi-circular “solar” motif around his head—an illustration, perhaps, of his spiritual Third Eye awakening:

These ceremonial knives called Tumis show human beings crowned with a semi-circular “solar halo,” which portrays them as being illuminated by the rising sun around their heads. Left: The entire head is inundated with “solar” (read “spiritual”) light. Right: The same solar light appears; here there is even a circled dot in place of the Third Eye.

The Inca king also wore a golden orb necklace across his chest, which may have symbolized his knowing or “gnosis” of the “inner sun” or “higher Self” within. Such representations may have implied that sunlight or soul-light resides inside every human being.

Interestingly, the Incas understood the doctrine of duality—the ida and pingala of Kundalini Yoga—believing a totality is comprised of two opposing and contrasting forces locked in equilibrium. Like the ancient Hindus, the Incas understood the sun (“hanan”) was spiritual and masculine while the moon (“hurin”) was material and feminine. More importantly, the Incas knew that it wasn’t just “duality” that was important; it was the “union” of this duality…the “joining” of these hanan/hurin opposites… that enabled the magic of “balance” and “transcendence” to take place.

The ancient Maya also believed the world is made of duality, and that to touch the alchemical gold we must understand and balance this duality; in fact, this was the fundamental “religion” of the Mayan people.  Mayanist Mercedes de la Garza tells us that, “…the basic concept of the Maya religion (and that of Mesoamerica in general) is harmony of opposites…”

This idea of “harmony of opposites” is also visible in pre-Inca art and architecture across western South America. In some cases, it was directly related to the Third Eye.  In the following examples of Chancay art, two puma bodies on the forehead unite into a single puma face/head: 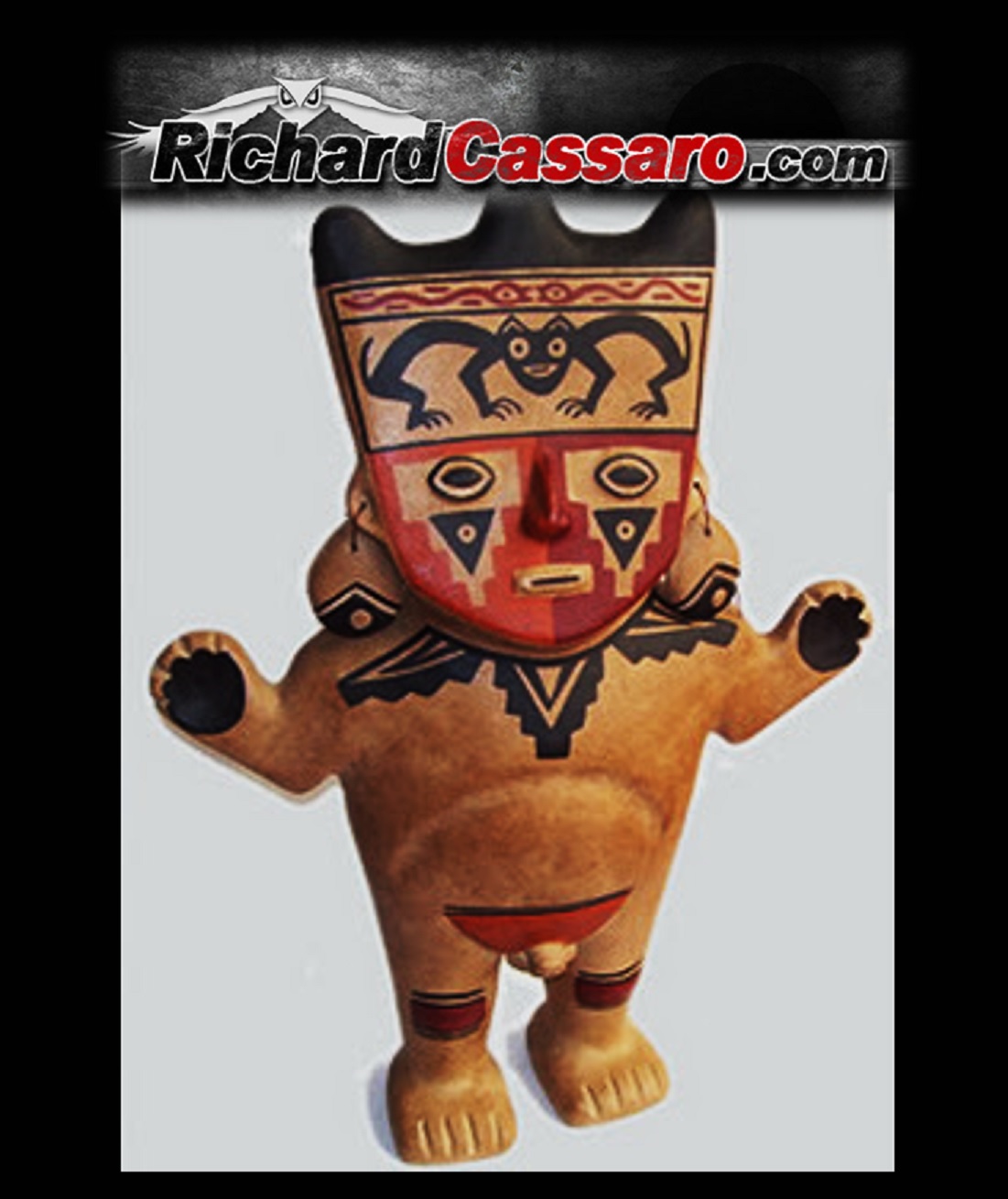 In some pre-Inca cultures, like the Moche, the Third Eye was depicted as an owl´s face; this is because the owl is an ambivalent symbol, encompassing both sides of the duality and thus symbolizing a “union” or “reconciliation” of the opposites as one:

Three examples of an owl´s face in place of the Third Eye, from the ancient Moche (Mochica) culture Peru.

Sometimes, Third Eye symbolism in New World cultures takes the shape of a three petal flower or plant, which, in the Old World cultures of Europe is called a fleur-de-lis emblem, as shown below:

One of the most interesting and pertinent symbols used to depict the Third Eye is the sun. We see this in Peru especially, as shown in the following Moche art:

The Moche may have understood that the Third Eye and the sun are directly linked insofar as the Third Eye “sees” the “soul within” (read “sol within”).

Finally, the Aztec sculpture below shows a direct reference to the Third Eye on the forehead. The symbol is clearly shaped like a giant single eye: 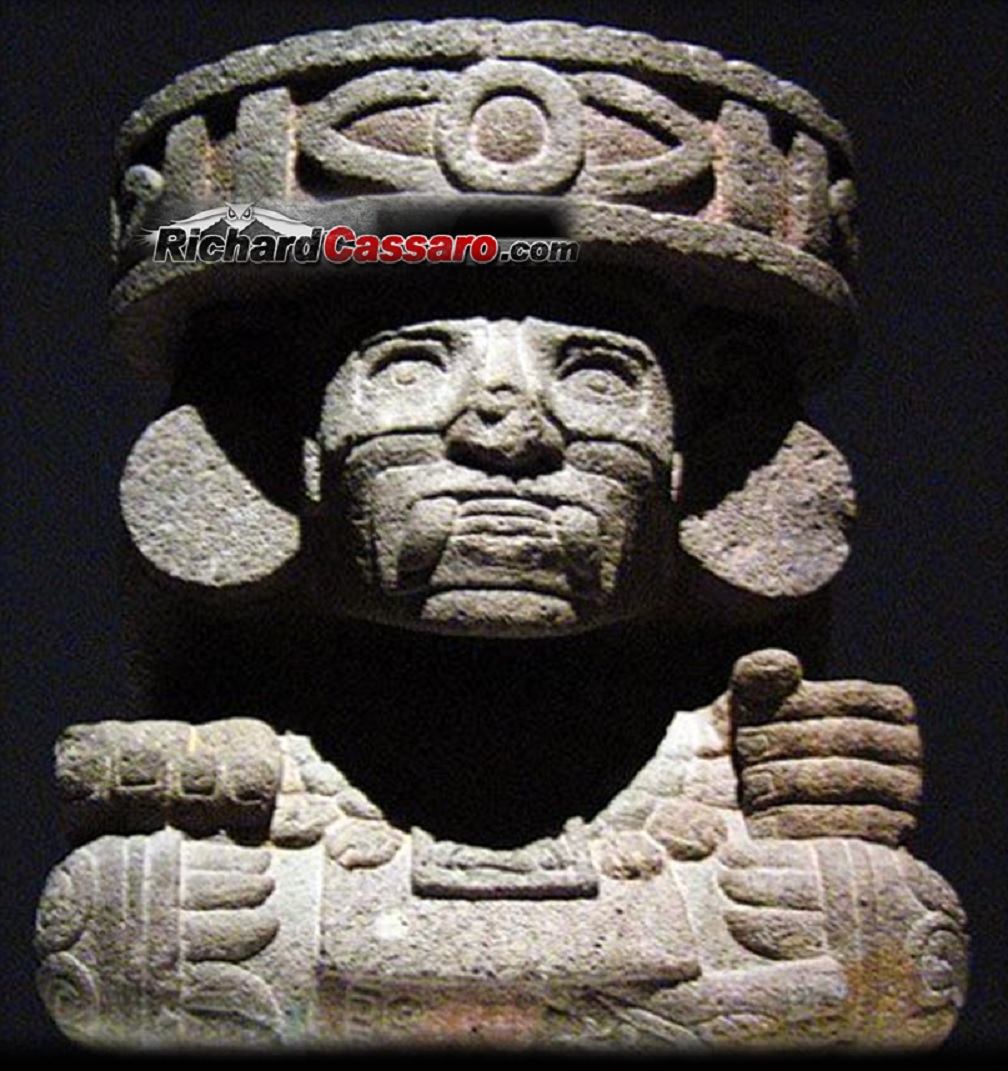 Mysterious single eye pattern above the forehead (in the location
of the Third Eye) of the Aztec fire god, Huehueteotl.

You can learn more on Richard Cassaro´s “Third Eye In The Ancient Americas” archaeological discovery by reading his best-selling book, Written In Stone, where he shows how these ancient American Third Eye images once formed part of a lost “Universal Religion” of the Third Eye in Antiquity.