Atlantis: Located miles beneath the Ice sheet of Antarctica? 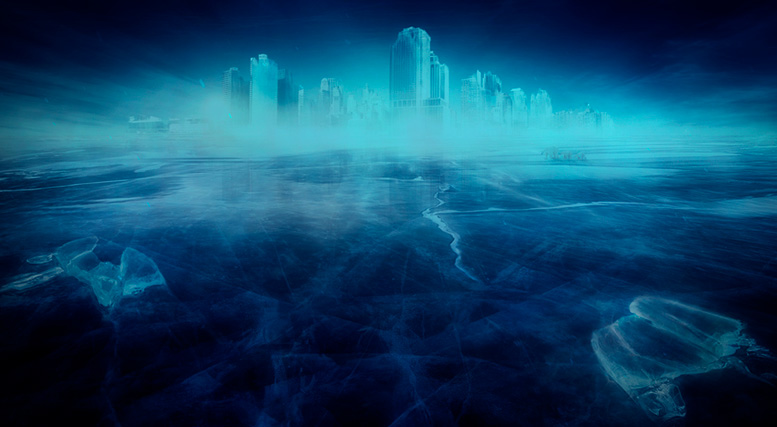 In 1958 the historian Charles Hapgood proposed his “Pole shift theory.” According to this hypothesis the movements of the earth’s crust has made it possible for large areas of the Antarctic continent to have been free of ice about 12,000 years ago.

Hapgood maintained that his theory was firmly backed up and based on the map of Piri Reis, discovered in Turkey in 1930. This document believed to have been created around 1513 shows what appears to be the northern coast of Antarctica as a vast ice-free territory. In Maps of the Ancient Sea Kings Hapgood supported the idea made by Arlington Mallery that parts of the Piri Reis Map depicted an area of Antarctica known as Queen Maud Land.

Furthermore, Hapgood concluded that “Antarctica was mapped when these parts were free of ice,” taking that view that an Antarctic warm period coincided with the last ice age in the Northern hemisphere, and that the Piri Reis and other maps were based on “ancient” maps derived from ice-age originals.

Hapgood sustained that an Antarctic warm period coincided with the last ice age that occurred in the Northern hemisphere, suggesting that the Piri Reis –and other maps were based on “ancient” maps derived from ice-age originals.

Years after, numerous researchers and authors suggest that the historian’s hypothesis are not only true but in the light of this information, it is possible to state that the lost continent of Atlantis lies hidden beneath thick layers of ice on the continent of Antarctica.

Curiously, the first historical mention of Atlantis is found in the work of Greek philosopher Plato, who refers to the city as a sanctuary built by a hybrid species between gods and humans, 9,000 years before his time. These dates coincide with those stipulated by the “Pole shift theory.”

The Piri-reis map, a mere coincidence?

The Piri Reis map was composed around 1513, and in addition to displaying Antarctica without ice, it accurately depicts the geography of the American Continent with such precision that it looks as if it was put together with the aid of aerial photography.

Interestingly, this map was examined by the US Hydrographic Office of the Navy, where its authenticity was confirmed. The map was proven genuine and is so accurate that it was purportedly used to correct errors in some modern maps.

However, it is NOT the only map which portrays Antarctica as a continent free of ice. (Check out our article 9 Ancient maps that SHOULD NOT exist)

For example, another fascinating chart is the Hadji Ahmed map, published in 1559. This incredible map shows accurate delineations of the western coast of Northern America and Antarctica.

What is even more mindboggling is the fact that this ancient map shows a land bridge connection Siberia and Alaska, indicating it originated from a time when the bridge was still present.

Furthermore, published in 1737 by Philippe Buache, the Buache map is believed to have been created with the use of much more ancient maps.

This chart displays Antarctica well before the ‘icy’ continent was in fact discovered. Interestingly, like many other ancient maps, this too accurately depicts Antarctica with no ice.

The Oronce Finé World Map created in 1534, is an early cordiform chart which displays features of Antarctica when the continent was not covered by Ice. While it is yet another map which shows the continent before it was officially ‘found,’ the chart also shows continent rivers, valleys, and coastlines while also depicting the approximate location of what is the South Pole today.

Based on these and other ‘controversial’ discoveries, Hapgood concluded that advanced cartographical knowledge appears on the Piri Reis map and the Oronteus Finaeus map, and must have been the result of an unknown ancient civilization that developed advanced scientific knowledge before other civilizations such as Greece, Atlantis perhaps?

In 2013, Google Earth showed images of pyramid-like structures protruding from the ice in Antarctica, which at one time confused scientists because they appeared to be artificial constructions.

It is even said that Adolf Hitler knew about an ancient civilization under the ice, and supposedly built a secret base on the continent. It is known that during the Second World War, the Nazi’s carried out a number of strange experiments with alleged technologies unknown to the rest of the world in their attempt to rule the world. They searched the planet for mythical artifacts and otherworldly technology hoping to come across a supreme power that would allow them to conquer the unconquerable.

Curiously, one of the most interesting quotes about Neuschwabenland and Antarctica comes from German Navy Grand Admiral Karl Dönitz who said that: “The German submarine fleet is proud of having built for the Führer in another part of the world a Shangri-La on land, an impregnable fortress.”

Interestingly, according to a number of rumors, ‘Station 211’ did exist, and if it did, then it must have been (maybe till is) located inside the ice-free mountain range in the Muhlig-Hofmann Mountains of Neuschwabenland, aka Queen Maud Land.

What do you think, do all of these discoveries point to the possibility that an extremely advanced ancient civilization —perhaps Atlantis— once existed on Antarctica? Let us know what you think.