UFO hunters consider this as official, decisive, unquestionable proof that a UFO was sighted on the Deception Island on July 2, 1965, flying in strange, mysterious patterns across the sky.

In July of 1965, 18 years after the infamous Roswell UFO Crash, newspapers around the world announced using sensationalistic headlines that UFOs had been seen over Antarctica, specifically from the Orcadas Naval Detachment (Argentina) and from three other bases operating on Deception Island: one from Chile, another British and the third, Argentina.

It was also said that those three countries had officially reported the event. However, up until now it the British report remained a total mystery.

However, it seems that the event that occurred in July of 1965 was reported and cataloged by the British Antarctic Survey. Only recently have the documents become publicly available.

Brazilian Aeronautics Officer Rodrigo Moura Visoni was the man responsible for discovering the declassified files belonging to the U.K.

The Document is a report that speaks about the UFO sighting that occurred on Deception Island from a British point of view.

On the declassified document, we can clearly see credentials on one side, and there are no erasures and no blacked-out parts. The file bears the letterhead of the British Antarctic Survey (BAS), it is addressed to the Minister of Defense RA Langton and is signed by the director of the BAS, the famous Antarctic expeditionary Sir Vivian Fuchs.

On the 12th July this year the British Antarctic Survey Base on Deception Island (62° 59′ S, Long. 60° 34′ W) reported the following, which I quote as requested:

“Argentine base (on Deception Island observed a moving colored light on June 7th, 20th, and July 3rd. Chilean base (also on DEception( made similar observations on the latter two dates. Flickering red-green-yellow light observed from British Base 2300 Z 2 July die north; it had moved in two waves quickly from the west then reversed along the course for a short distance before returning again to the north where it remained stationary for about 20 minutes.”

I this I should comment that our people in the Antarctic did not consider the important event enough to comment until asked. I requested information because of pressure from the B.B.C., N.B.C and the Press who were acting on a news report put out from Argentina. 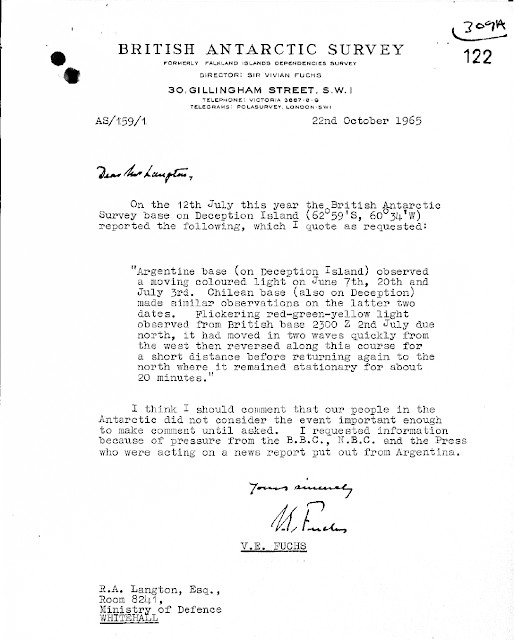 The entire chain of events is believed to have started when on June 7th, 1965, meteorologist Jorge Stanich from the Argentinian base observed a bright yellow stationary object at a distance of 2,000 meters in the sky, which disappeared after remaining there stationary, a few moments.

According to Stanich, the enigmatic object has a diameter of roughly 50 meters. Stanish witnessed the same object the following day.

On June 18th, another mass sighting occurred above the Chilean base, also on Deception Island. A massive zigzagging light which changed colors from yellow to green and red was visible for approximately 15 minutes.

On July 3, nine members of the same base observed for 20 minutes maneuvers of what they called “a luminous, lenticular-shaped mass” which occasionally changed color, and moved across the sky at high speed.

Two minutes later the same object was seen by 17 people above the Argentinian base on the same island in a timeframe of roughly one hour.