20 Facts about the Ark of the Covenant

The Ark of the Covenant has been one of the most mysterious objects described in the Bible and for centuries, countless people have tried to find this ancient treasure. 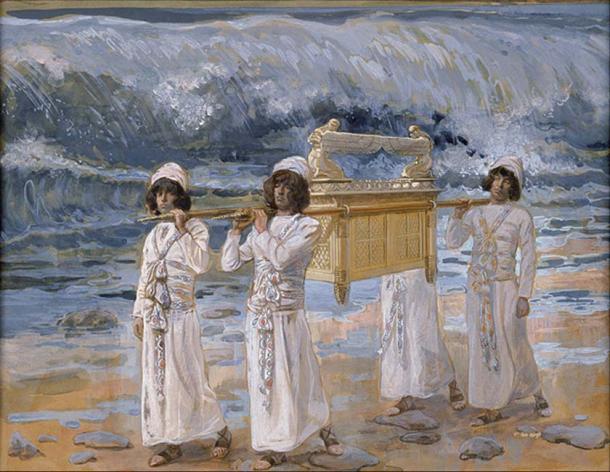 ‘The Ark Passes Over the Jordan’ ( public domain )

It is described in the Book of Exodus; it contains the tablets of stone of the Ten Commandments.

The Ark of the Covenant was carried by the Israelites during their forty years trip through the desert.

Wherever the Israelites camped, the Ark was always placed in a special tent referred to as the Tabernacle.

It is described in the New Testament letter to the Hebrews as containing Aaron’s rod, a jar of manna and the first Torahs scroll as written by Moses.

The Book of Kings provides a different description, at the time of Solomon, the Ark of the Covenant contained only two items; the tablets of the law.

The book of Exodus tells that the Ark of the Covenant was built by the command of God the Almighty who gave instructions to Moses on Mount Sinai.

The Ark of the Covenant is connected to several miracles of the Old Testament.

The Ark of the Covenant is said to have cleared the way for impediments and poisoned animals.

At the time the Israelites crossed the Jordan River into the “Promised Land” the Bible states that the river stopped flowing when those who carried the Ark set foot in the river.

When carried, the Ark of the Covenant was concealed under a very large veil that consisted of skins and blue cloth.

According to the Book of Exodus;  the dimensions and characteristics of the Ark of the Covenant are 2½ cubits in length, 1½ in breadth, and 1½ in height which is approximately 131×79×79 cm or 52×31×31 in. The entire Ark was plated with gold, and a crown of gold was put around it. Four rings of gold were attached to its four feet, two on each side and through these rings staves of shittim-wood plated with gold were placed to carry the Ark. these were never to be removed. A golden cover was placed above the Ark; also called kapporet.

After the Babylonian Empire had conquered the Israelites, the Ark of the Covenant was located in the Temple of Jerusalem; after the conquest trace of the Ark has vanished.

Scholars do not know for sure what occurred to the Ark after the Babylonian conquest; it is said to have been destroyed or hidden.

Most historians agree that the Ark of the Covenant is found in Ethiopia in the town of Aksum; the Cathedral of St. Mary of Zion.

According to church authorities, only one man; the Guardian of the Ark can see it.

Church authorities have never permitted the “Ark” to be studied for authenticity.

According to historians, the other possibility is that the Ark of the Covenant is located in a hidden chamber beneath the first temple of Jerusalem before being destroyed by the Babylonians. This claim cannot be verified because this site is where the Dome of the Rock shrine is located; sacred to the Islam so it’s not allowed to dig underneath.

Featured image credit: ‘The transfer of the ark by the singing and dancing King David.’ ( public domain )