A giant footprint has been discovered in China

While exploring the region near the village of Pingyan, in China, a group of photographers came across a GIANT footprint fossilized in rocks. The massive footprint believed to date back to ancient times is 57 centimeters long, 20 centimeters wide and 3 centimeters deep.

The idea that giants roamed the Earth has captured the interest and imagination of writers, researchers, and archaeologists around the globe.

Even though ‘Giants’ are considered only a myth, product of folklore, numerous discoveries on our planet point towards a different ‘truth.’

Little by little people around the world are discovering what many considered as the ultimate proof these beings once existed on Earth.

New evidence has allegedly been discovered is Asia, and it may confirm that there’s more to these stories than just myths.

In the village of Pingyan, in China, a group of photographers came across a GIANT footprint fossilized in rocks. 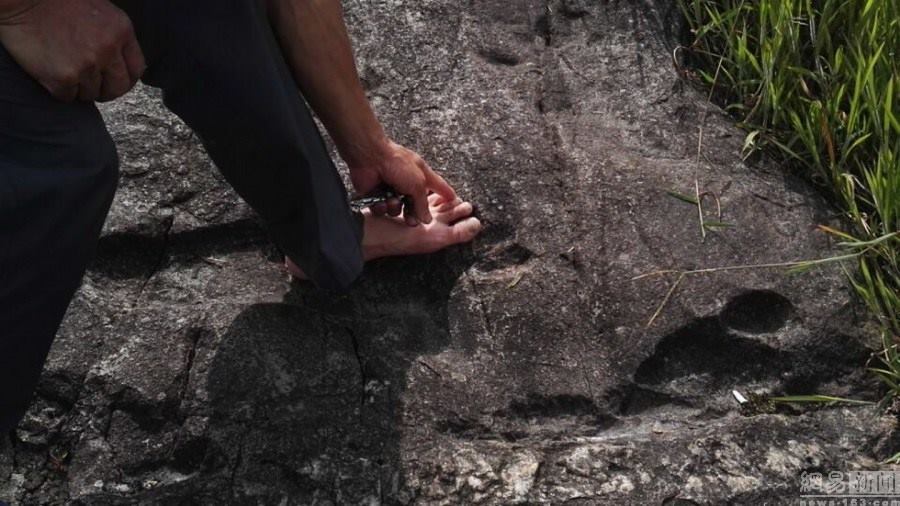 It is one of the many that have been found all over the planet. The massive mark believed to date back to ancient times is 57 centimeters long, 20 centimeters wide and 3 centimeters deep.

Currently, researchers are looking into the discovery studying the origin and age of the massive fossilized footprint, hoping to reveal the truth behind it.

As we mentioned above, giant footprints are anything but new. In fact in 1912 Stoeffel Coetzee found a massive footprint of 128 centimeters in length and 60 centimeters in width.

Michael Tellinger who uploaded a YouTube video of the massive footprint in 2012 firmly believes it is one of the best pieces of evidence that supports the idea giants roamed the earth.

Known by locals as the “Footprint of God,” Tellinger describes the 1.2-meter long footprint as sensational and believes it dates back around 200 million years.

In addition to the footprint of God in South Africa, a 290 million-year-old footprint was also discovered in New Mexico by paleontologist Jerry MacDonald in 1987.

This 290 million-year-old footprint has been categorized by paleontologists as ‘problematic’ as they do not seem to understand the way it got there, and better yet, who left it there.

Do all of the above footprints prove history as we have been taught in school is wrong? Interestingly Stories and tales about gigantic beings inhabiting Earth occur in almost all ancient cultures and civilizations.

We can find stories in many mythologies of the ancient world: Greek, Norse, Germanic, Indian, Indo-European, and also in the new world as in the traditions of the Mayans, Aztecs and Incas; but most importantly in almost all major sacred books of antiquity: the Lebhar Gabhale, the Hindu Ramayana and even in the Bible.

What are your thoughts? Is it possible that Giants really roamed the Earth in the past?

Many of you will have mixed views about this finding, but evidence of giants can be found in numerous sites across the planet and even in ancient texts.