The Wheel of Giants: The mysterious 5000 year old monument…...

The enigmatic Rujm el-Hiri is without a doubt one of the most mysterious structures ever discovered in the Middle East. This ‘prehistoric’ construction passed unnoticed for centuries and even today, no one knows its exact purpose.

This monument became noticed after Israel captured the region in the war of 1967 when archaeologists noticed the anomalous formation during an aerial survey of the region. Subsequent excavations revealed that it is one of the oldest and largest regional structures discovered to date. Known as Rujm el-Hiri which means “stone heap of the wild cat” the structure consists of five concentric circles, with the biggest of them having over 150 meters in width, and a burial chamber located in the middle. However, no human remains have been found on the site. 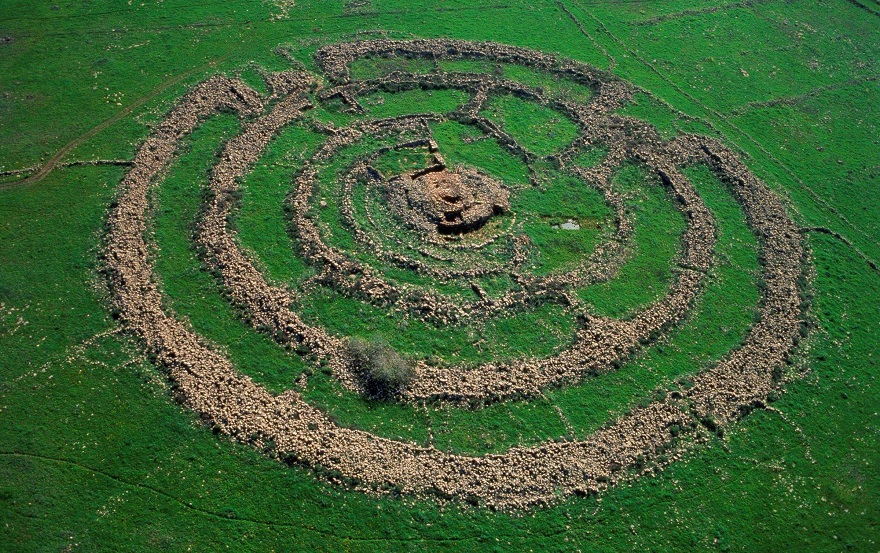 In Hebrew this monument is referred to as Gilgal Raim which translated means “Wheel of Giants” making reference to an ancient race of giants that mentioned in the Bible.

“It’s an enigmatic site. We have bits of information, but not the whole picture,” said Uri Berger, an expert on megalithic tombs with the Israel Antiquities Authority to Haaretz.

“Scientists come and are amazed by the site and think up their own theories,” he added.

According to early estimates, this enigmatic monument of the giants is at least 5000 (Early Bronze Age II period (3000 to 2700 BC)) years old which makes it a contemporary of one of the world most famous circle-style monuments… Stonehenge. Interestingly, the Golan structure was built with piles that are composed of thousands of smaller basalt rocks which, when put together, total over 40,000 tons.

The truth behind this ancient construction is a total mystery according to archaeologists who are unsure about the builders of Gilgal Raim. Even though some believe the ancient site was actually erected by a race of giants that walked on Earth in the distant past, experts believe the monument was erected by a nomadic civilization that settled in the area in the distant past.

According to Uri Berger, this theory is unlikely since it would have required a tremendous support network that itinerants might not have had. Experts believe that the builders of this ancient monument required over 25,000 working days in order to complete the monument.

Experts seem to agree that the ancient site could have had a very important astrological role since on the shortest and longest days of the year, the June and December solstices, the sunrise appears to line up with the openings in the rocks.

Experts were able to provide accurate dating thanks to the shards of pottery and flint tools that were found in the vicinity. According to Berger, scholars agree that the construction of Rujm el-Hiri started somewhere around 3.500 BC and was finished in the next two thousand years.