10 Jaw-dropping sights on Google Earth you won’t believe are...

Using various Satellites located in geosynchronous orbit that snap really bad images of Earth, to extremely sophisticated satellites that capture high-resolution images, aerial photos from airplanes, drones, balloons and nearly everything else that can fly, Google Earth takes what it can to compile the most complete imagery of our planet.

Everything compiled is available for free via their software to anyone who is willing to explore the planet, taking advantage of this rich source.

In this article, we’ve gathered some of the most mysterious and fascinating images from Google Earth you won’t believe are real.

The enigmatic symbols at the Gobi Desert 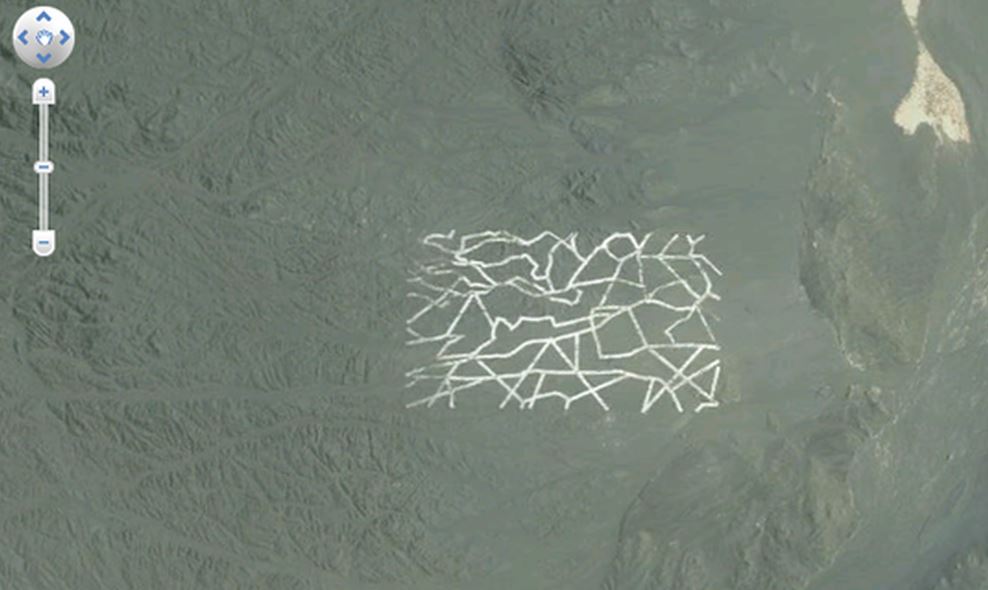 Located in the Gobi Desert are an array of strange structures and patterns that were carved into China’s Gobi desert.Some experts argue what were are looking at is in fact a military base, and the visible markings and structures are a used for different purposes, including weapon testing, spy satellite calibration, and radar instrumentation.The mysterious features ni the Gobi Desert are composed of an intricate grid of perfectly straight lines that weave back and forth every few hundred feet for over thirty kilometers. 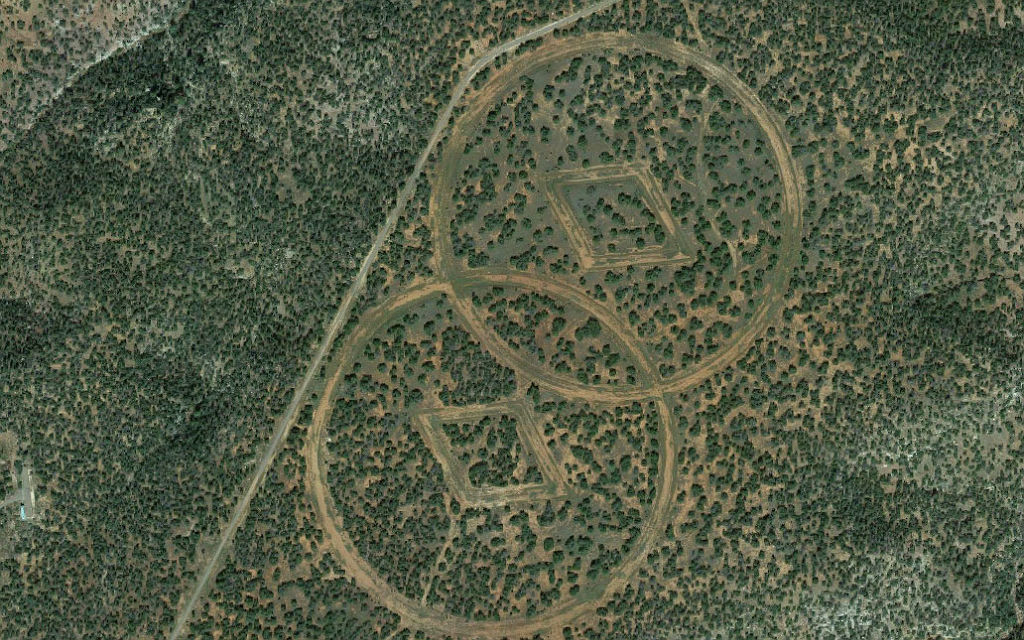 If we travel to the desert floor near Mesa Huerfanita in New Mexico we will find a pair of huge mysterious symbols on the surface.

According to author John Sweeney, the pair of overlapping circles are the marks of a hidden bunker that belongs to the Church of Scientology. According to their website, Scientology “is a religion that offers a precise path leading to a complete and certain understanding of one’s true spiritual nature and one’s relationship to self, family, groups, Mankind, all life forms, the material universe, the spiritual universe and the Supreme Being.” 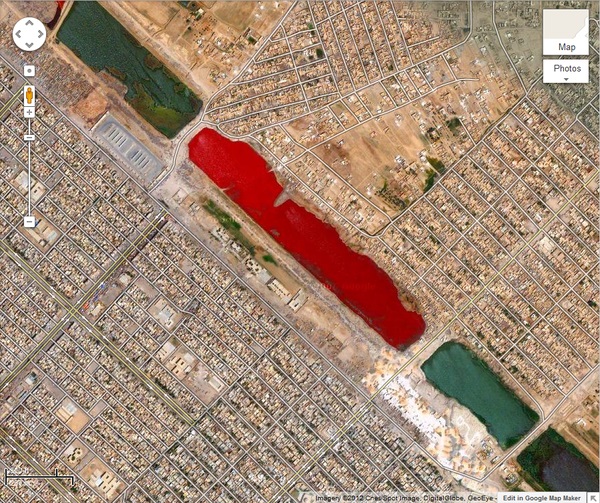 At coordinates 33.396157° N, 44.486926° E, we find another mysterious sight. Just outside the city of Sadr in Iraq, there is a blood-red lake. The Lake has changed in color throughout the years with reports stating that the lake has changed from Red, Blue to a green color. So far, no official explanation has been given. 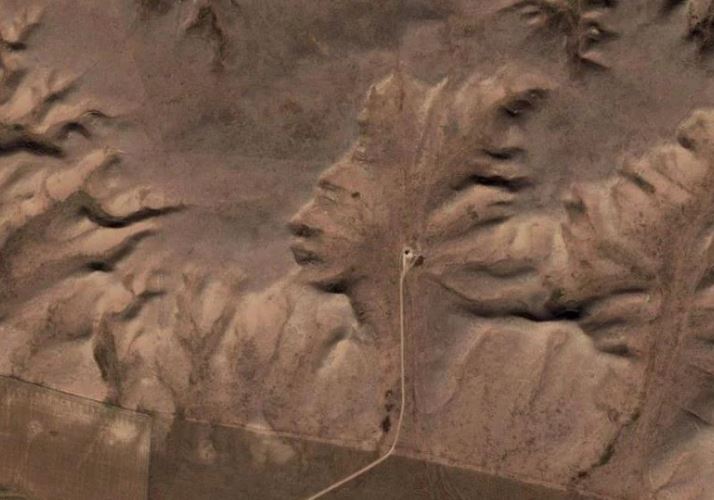 If we take a look at Coordinates 50°00’38.2″N 110°06’48.3″W, we will come across one of the most mysterious features identified on Google Earth. Known as the Badlands Guardian—also known as Indian Head—the strange figure is a geomorphological feature located near Medicine Hat in the southeast corner of Alberta, Canada. Viewed from the air, the feature bears a strong resemblance to a human head wearing a full Aboriginal Canadian headdress, facing directly westward. The feature was originally discovered by Lynn Hickox while examining images on the Google Earth application in November 2006. 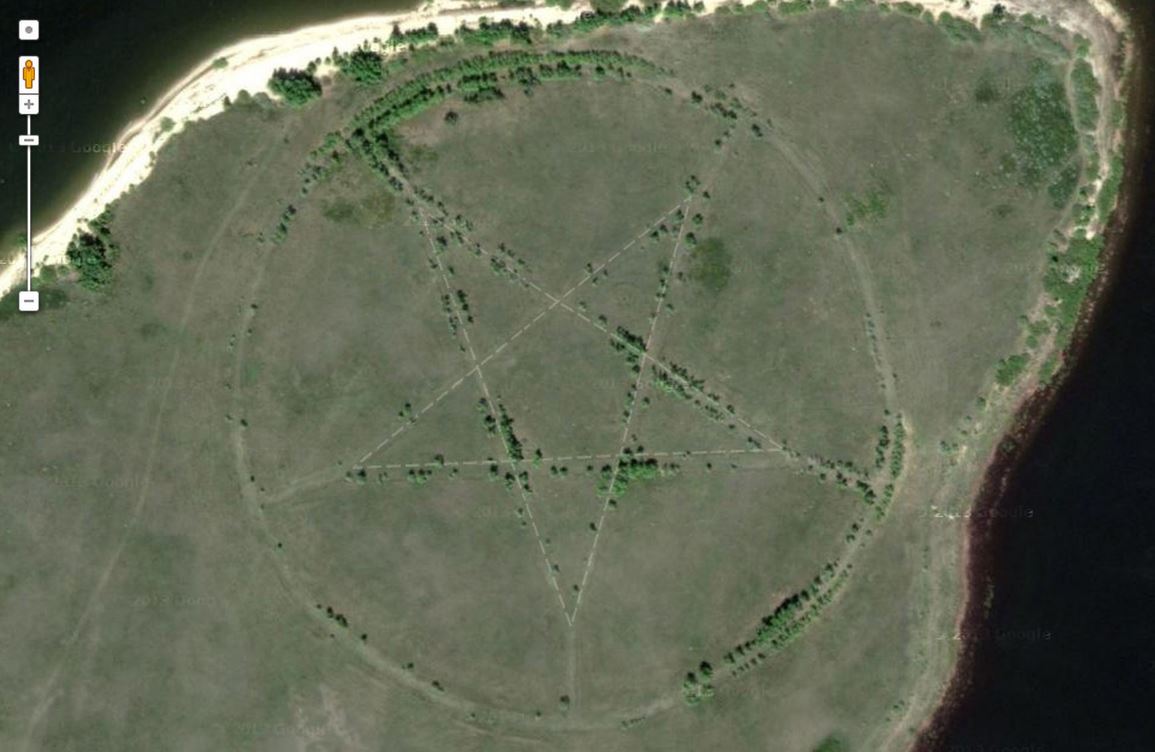 Another strange feature seen on Google Earth can be found on the wind-blown steppes of central Asia, in an isolated corner of Kazakhstan, where we can find a large pentagram, measuring roughly 366 meters in diameter, etched into our planet’s surface. Many have linked the strange feature to devil worship, nefarious religious sects or denizens of the underworld, but the truth is that the strange Pentagon is I fact the outline of a park made in the form of a star; the star is marked by roadways that are now lined with trees, making the star shape even more distinct in aerial photos. 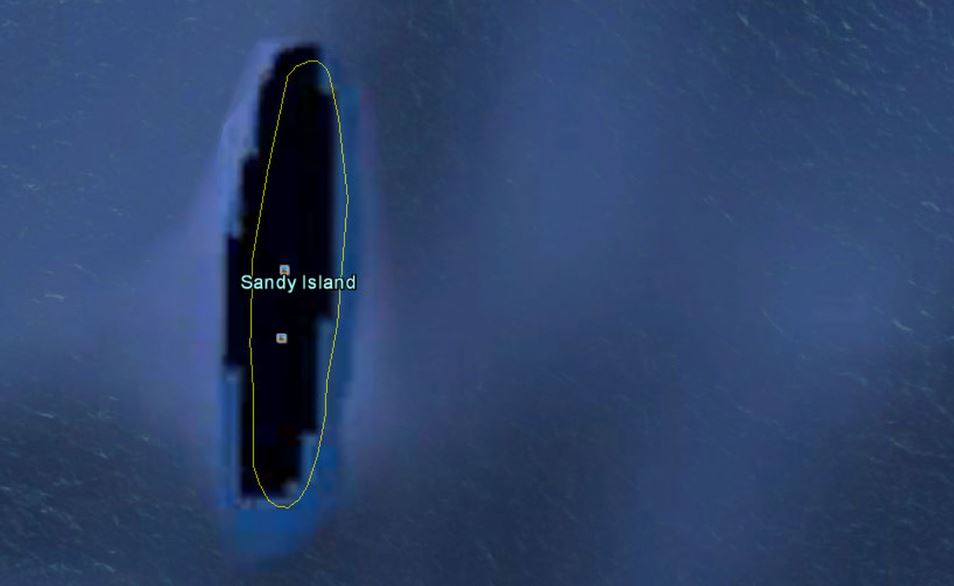 In 2012, a group of Australian researchers found what appeared to be an undiscovered Island located in the South Pacific. Called Sandy Island, the mysterious landmass popped up on maps just northwest of New Caledonia. In 2012, Scientist decided to verify the discovery but found nothing but open water instead of solid ground.

So what happened to the island? According to experts, the mystery phantom island had been included in maps for more than a century most likely due to human errors and even a possible pumice raft. However, there are many who believe that this area marks the entrance to a mysterious underwater base, that every once in a while, opens up becoming visible to satellites.

Pyramids are located all around the globe. Wherever we travel, in nearly all continents on Earth ancient civilizations erected massive pyramids for different reasons.

Many pyramids are waiting to be discovered. This image from Google Earth shows an anomaly which according to many is evidence of a lost—unexcavated—pyramid.

So far countless similar anomalies have been found using Google Earth in the last decade. 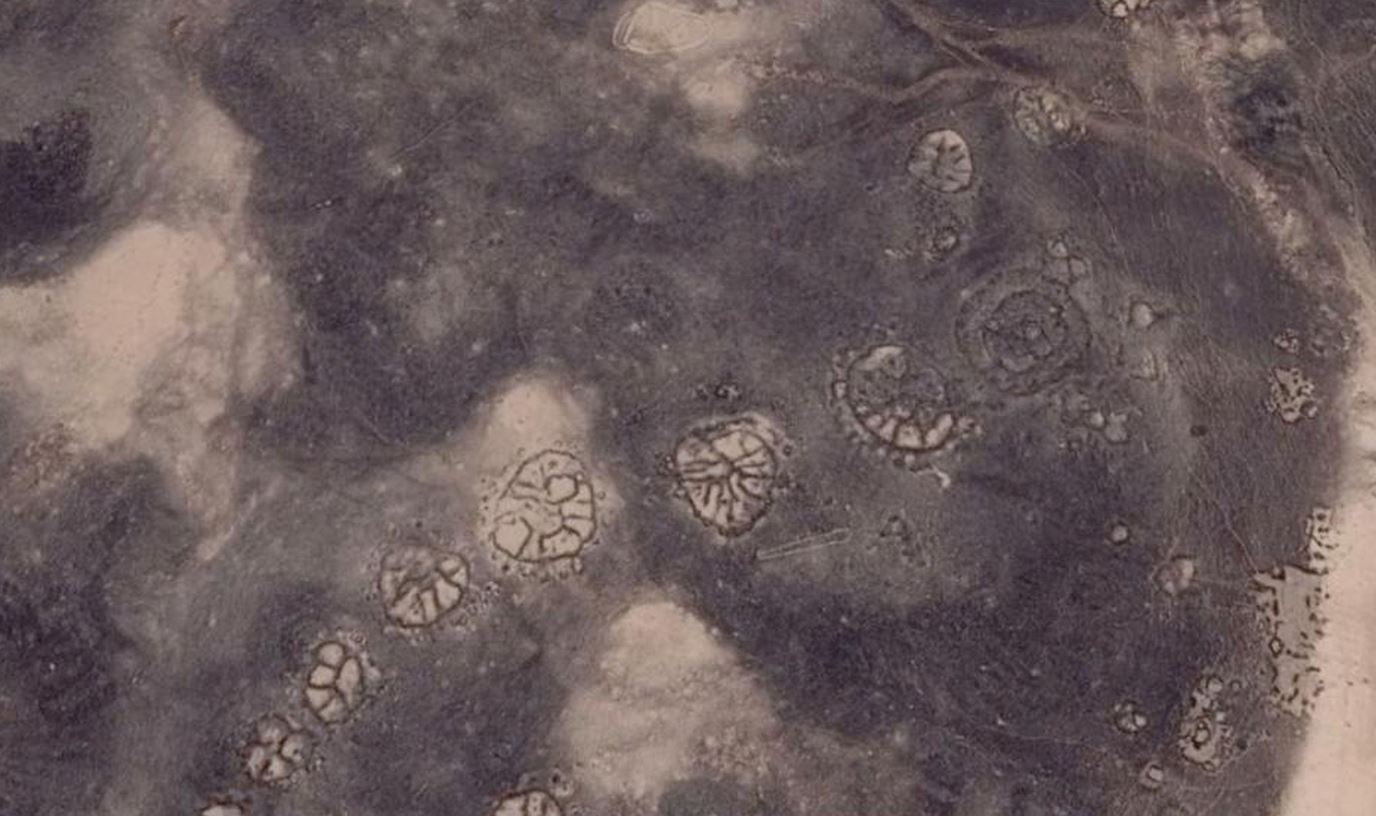 Google Earth has been one of the most useful tools for archaeologists and researchers. Satellite images have helped experts discover wheel-shaped structures that may date back some 8,500 years, making them older than Peru’s more famous geoglyphs the Nazca Lines.

According to experts, the Jordanian ‘Nazca’ lines are positioned in a way that aligns with sunrise on the winter solstice. 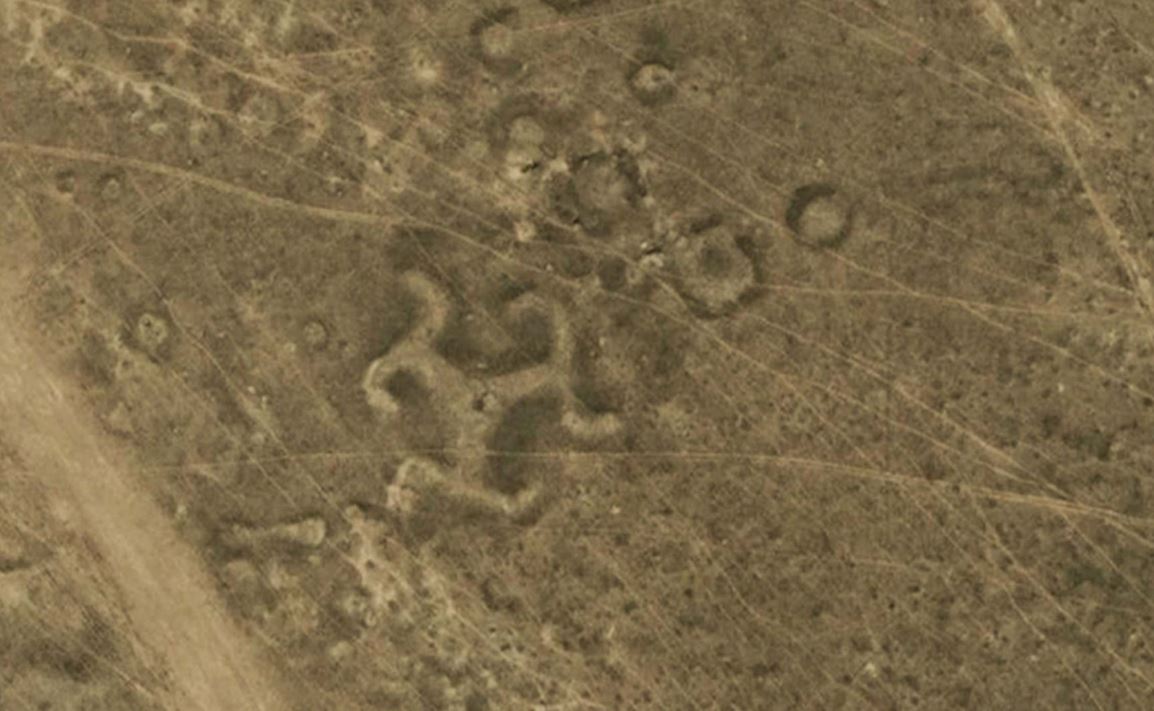 With the help of satellite and aerial images, experts have discovered more than 50 massive geoglyphs that stretch across northern Kazakhstan in Central Asia. One of the most prominent features is a massive ancient Swastika created from timber. Many of the geoglyphs were created of earthen mounds. Experts believe the enigmatic geoglyphs date back around 2000 years. 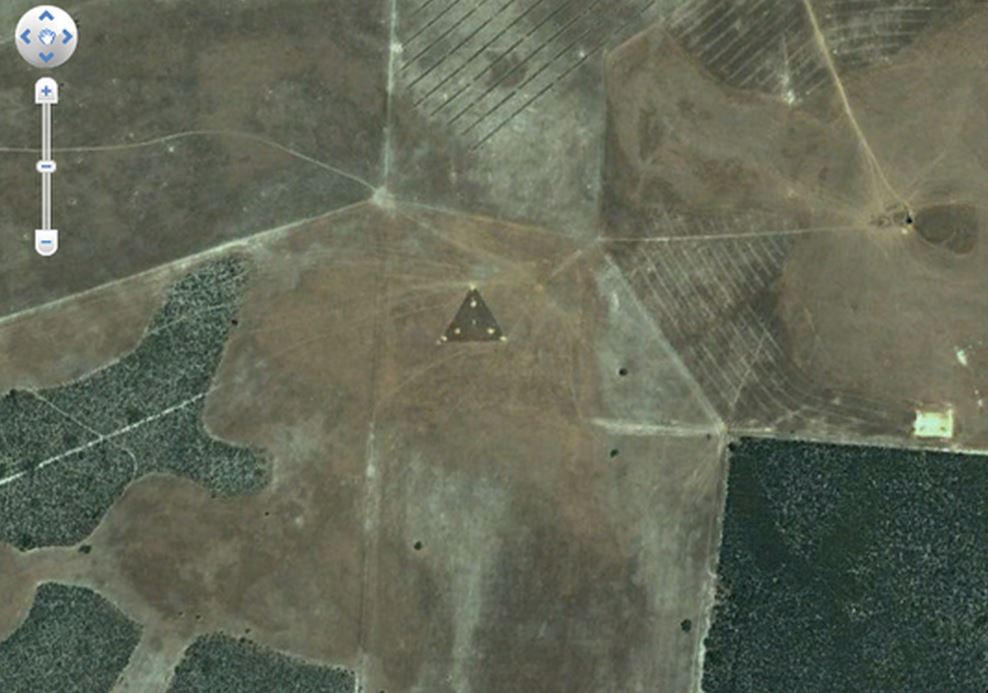 If we take a look at coordinates 30°30’38.44″S 115°22’56.03″E, we will find a strange triangle dotted with bright lights in the middle of a field. When the mysterious feature was first discovered in 2007, ufologists were quick to call it a “triangle UFO” caught in the act of hovering above Earth.

Other Google Earth users say it may be an antenna associated with a nearby remote-controlled wind farm. With three sets of wires forming a triangle and a tower in the middle, the antenna likely receives and transmits control signals.