350 Ancient Artifacts Found In Ecuador Including A Pyramid Depicting...

South America is undoubtedly one of the most neglected territories archaeological speaking.

The only territories that have been “well explored” are in Peru and Bolivia, this leaves countries such as Colombia, Brazil Paraguay, Chile and Ecuador in the shadows. According to many archaeologists, it is in these countries where most of our ancient ancestor’s treasures are hidden.

La Manna is a small city located in the province of Cotopaxi, 150 km from Latacunga, capital of the province.

In 1984, archaeologists came across an incredible discovery: a series of objects that according to researchers, cannot be traced to any pre-Columbian cultures of the region. These artifacts quickly received the title as Out of Place Artifacts.

Today, many believe that these items belonged to the legendary Atlantean civilization, proving that Atlantis existed in South America.

Among the mysterious 350 artifacts, there is one item that has baffled researchers since its discovery. A mysterious stone pyramid about 25 cm tall. Among the artifacts discovered there is another item that challenges archaeologists. A small artifact depicting a Royal cobra, The royal cobra is native to the South-Eastern parts of Asia, and cannot be found in South America.

So what is it doing halfway across the world in Ecuador? 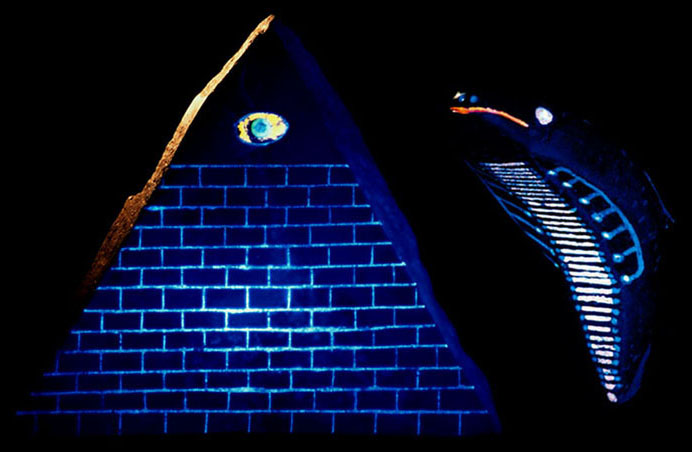 These incredible objects appeared to be designed following a psychoacoustic geometry, with magnetic effects of zero point. Their lithic design challenged mainstream theories about the knowledge and technological capabilities of ancient civilizations.

In addition to its similarity to ancient civilization like the Maya, some of the items have been proven to be consistent with the ancient civilizations of Southeast Asia, and even their logographic forms bear an acceptable comparison with Sanskrit, and their existence could date to a time when the planet was inhabited by a single civilization technologically superior to our current.

But there is a lot more about these mysterious artifacts. In addition to the complex mineral composition that covers the entire known light spectrum, with ultraviolet fluorescent properties.

When these objects are exposed to ultraviolet light, the light scatters in a non-linear way shifting the focus to certain symbols sculpted under normal lighting conditions that might appear unimportant without the proper light.

All of these objects are of different sizes, some are finely carved discs with geometric patterns displaying concentric and eccentric circles, spirals and plates with strange engravings, some resembling constellations like Orion and the Pleiades.

There are many cups and pots that bear symbols similar to the ancient Maya, depictions of animals that are native to countries from Asia and a 60 cm tall stone slab which has the World Map engraved on its surface. The mysterious stone slab seems to depict South America, Central and Northern Europe, parts of Asia and Africa and three unknown smaller continents that have not been connected to any known contemporary landmasses. The map appears to represent a very ancient period where the geographical structure of our planet was very different. The Caribbean islands and Florida are not shown on the map.

A small continent or Island is depicted in the middle of the North Atlantic, below the equator on the Pacific, another unknown landmass is represented. South of Japan, there appears to be a third landmass that mysteriously coincides with the underwater monuments at Yonaguni.

The map is even more mysterious taking in count that La Mana, where the objects were found and ancient Babylon are connected with a white line. 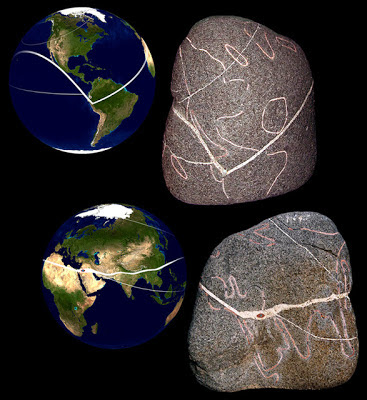 This mysterious pyramid is made out of black and white stones, it has thirteen levels and the “all-seeing-eye” at the top of the pyramid. Mysteriously, when the Pyramid is exposed to ultraviolet light it shines. Strangely the design of the pyramid does not resemble any known Mesoamerican pyramids, but it looks very much like the classical pyramids found in Egypt. At the bottom go the pyramid there are strange inscriptions and a set of “dots” that coincide with one of the most famous constellations of all time: the constellation of Orion. The inscriptions on the bottom of the pyramid are archaic Sanskrit glyphs that no one has been able to translate.

According to German linguists expert Kurt, Schulman, the writing found at the mysterious Black Pyramid of Ecuador is a writing system much older than Sanskrit. After analyzing the artifacts he believes that they can be attributed to a pre-Sanskrit civilization, one that we have absolutely no knowledge of. According to researchers if this is indeed Pre-Sanskrit writing it would make these artifacts be over 6000 years old.

Why a pyramid found in Ecuador has pre-Sanskrit writing on it and Orion’s constellation depicted is a mystery that no one has been able to understand or explain.

This only points toward the fact that we have little knowledge about the past of the human race.

Even though mainstream archaeology seems to close its eyes when it comes to items like the ones found in Ecuador, to understand the origin of them, archaeology must go outside of their comfort zone and explore the many possibilities.

There are several texts that speak about the Three Cosmic Pyramids. One of these Pyramids is located in Egypt, the Great Pyramid, another one can be found in Ancient Sumer while the third pyramid is said to be located on the Sacred Mountain. No one has been able to find the third Pyramid, the one that belongs to the sacred mountain until archaeologist discovered ruins of ancient civilizations in the Jungles of Ecuador.

What are the mysterious items that have been found in Ecuador?

And is there more to Ecuador and its jungles than we think? According to many researchers, Ecuador like many other South America countries is an archaeological goldmine. There are several reasons why researchers should head up to Ecuador and explore its territory.

Artifacts like the ones found at La Mana are proof that we have absolutely no idea about the distant past of South America civilizations and there are countless clues that can help us understand what ancient civilizations inhabited the Earth in the distant past. Archaeology will need to step up its game given the pace if it wants to keep up with the numbers discovers made in the last 10 to 20 years.