In another great discovery in Egypt, archaeologists have come across a 4,500-year-old ‘funerary boat’ near the Abusir Pyramids according to a statement from Egypt’s antiquities minister. 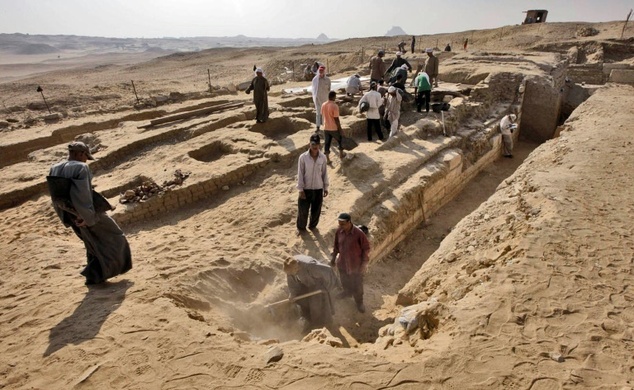 According to researchers, the antique vessel dates back to around 2550 B.C. and was discovered by experts during an excavation of a large mastaba, or ancient tomb, located in a cemetery of the Old Kingdom officials, south of the Giza Plateau.

Excavated south of the mud-brick tomb, the 59-foot-long vessel was dug up by a group of Czech researchers from the Institute of Archaeology at Charles University in Prague, led by Miroslav Barta.

According to reports, archaeologists discovered the 4,500-year-old remains lying on a bed of stone together with its original components such as ropes and wooden items in their original position. Interestingly, the wooden planks which were joined and put into place with wooden pegs were also found intact. According to researchers, the desert sand helped preserve the plant fibers that covered the planking seams, while ropes that held the boat together were found intact with their original details.

Miroslav Bárta said in a statement: “It is by all means a remarkable discovery. The careful excavation and recording of the Abusir boat will make a considerable contribution to our understanding of ancient Egyptian watercraft and their place in a funerary cult. And where there is one boat, there very well may be more.”

Even though this is a very important discovery, the original purpose of ancient Egyptian funerary boats remains a profound mystery. Some scholars suggest they were used by the ancients as ‘solar barques’, utilized during the journey of its owner through the underworld.  However, there are others who suggest that the ancient boats were simply funerary offerings used by the deceased in their afterlife.

According to scholars, the old Kingdom kinds had several boats buried in the vicinity of their tombs and pyramid complexes, however, most of the pits were found empty of any timber, or with simple patterns of brown dust and nothing else.

The only exception found in ancient Egypt is that of the two boats of Pharaoh Khufu, the kind credited with the construction of the Great Pyramid at Giza. The barques were found dismantled and are in the process of reassembling.

Archaeologists report that the Abusir Vessel is the first of its kind of significant dimensions from the Old Kingdom, found in a non-royal context.

“This is a highly unusual discovery since boats of such a size and construction were, during this period, reserved solely for top members of the society, who usually belonged to the royal family,” Bárta said.

Researchers suggest that the orientation of the vessel, its length and the pottery collected from within make a clear connection between the structure and the boat, however, the exact purpose remains a subject of debate.