by Ancient Code Team
1.4kviews
Each year, archaeologists and researchers around the globe make unprecedented discoveries. In the last couple of years however, —thanks to technological improvements and new tools— experts have become extremely good at finding things that have remained unnoticed for years.
For example, new technology allowed experts to discover THERMAL anomalies inside the Great Pyramid of Giza. Furthermore, experts have found entire ancient cities using revolutionary technologies that have helped experts see what the naked eye can’t.
In this article, we bring some of the most fascinating discoveries that experts made, and you probably never heard of.

A River of Mercury under the Pyramid of the Sun, Teotihuacan, Mexico

Found in a subterranean tunnel beneath the Temple of the Feathered Serpent in Teotihuacan, Mexico, archaeologists discovered a river of liquid mercury that could lead the way to the mythical Royal Tomb of Teotihuacan’s rulers. The tunnels ceiling was very interesting as it had traces of metal powder that reflects light in a curious pattern, almost as if mimicking the night sky. In ancient times, when entering the tunnel with torches, the metal dust shine just like the stars. Researchers believe that these traces are pyrite or magnetite remains elements not found in the region of Teotihuacan.

These metals were brought from somewhere else to paint the ceiling of the tunnel. 150 meters below the temple of the Feathered Serpent, researchers discovered 50,000 mysterious objects, ranging from animal bones, batons to metal spheres. The descent through the tunnel resembles the entrance to a mine, but the surrounding objects and mysterious ceiling resembles the journey to the underworld, in an enigmatic city that flourished between II and V century AD, 50 kilometers northeast of Mexico City. 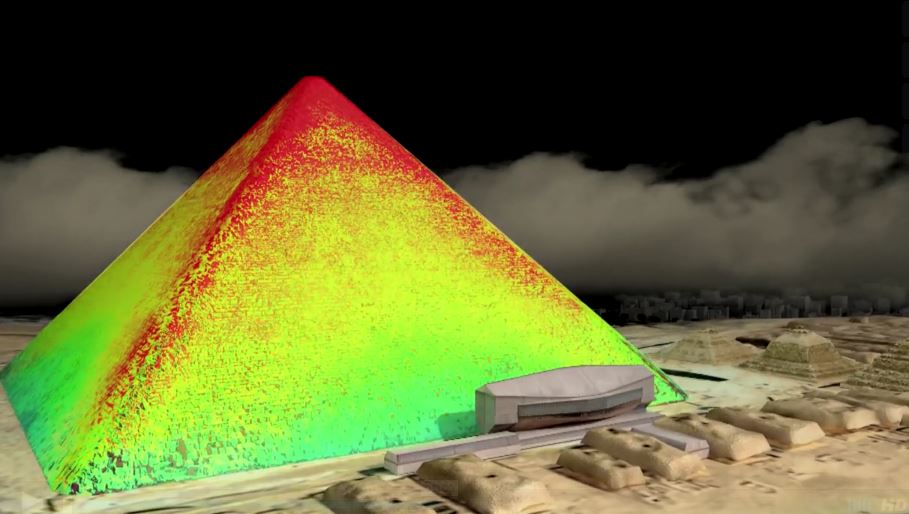 Considered by many as one of the most important discovery of the pyramid at Giza, the project Scan Pyramids has revealed here are ‘thermal anomalies’ that scientist say could lead to a previously unknown chamber inside the Great Pyramid. Using thermal cameras, Researchers have revealed higher temperatures in three stones in the Great Pyramid of Giza.

This has led experts to believe they have found a previously unknown chamber, concealed behind the stones of the Great Pyramid of Khufu. Basically thermal cameras detected temperature variations in three adjacent stones at the bottom of the structures. This discovery came weeks after researchers discovered similar anomalies in the tomb of King Tutankhamun Specifically, researchers have identified three blocks with a temperature six degrees higher than the other, which is “a big difference” according to Helal who did not dare to guess the origin behind the anomaly.

Recently, reaches have made an incredible discovery below one of the most important temples on the planet, Angkor Wat. New findings suggest the temple of Angkor Wat was bounded by a ‘mysterious structure’ of 1.5 km in length. Eight buried towers and the remains of a massive spiral-shaped structure have been discovered under the ancient temple of Angkor Wat in Cambodia, which, in the light of the new findings is believed to be much larger than previously thought. In the new project called The Greater Angkor Project, researchers learnt that the Angkor Wat complex is much larger than previously believed, with a number of components that were not visible prior to the study. Researchers also discovered that the complex was bounded on its southern side by a ‘unique and massive structure’.

According to researchers, the towers form a square which could have been sued in the past to provide support for a much larger structure. Experts believe the structure might have been some sort of sanctuary that was used during the construction of Angkor Wat.

According to new evidence presented by a group of researchers, one of the most enigmatic ancient monuments in Britain, Stonehenge, was first erected in Wales. Researchers have found evidence suggesting that ‘bluestones’ were actually quarried 500 years before they were put into place in Wiltshire, prompting the theory that Stonehenge might actually be a second-hand monument’.

Archeologists have known for a long period of time that the bluestones located in the inner horseshoe of Stonehenge originate from the Preseli hills in Pembrokeshire, located roughly 150 miles from Salisbury Plain. New evidence has led numerous researchers to question mainstream theories about the British monument suggesting that the great prehistoric monument could have been first erected in Wales. Researchers have also discovered nearly identical stones that the ancient builders had extracted but for some reason, mysteriously left behind. Among the numerous findings, researchers also discovered shells and charcoal from the quarry workers’ campfires which have been radiocarbon dated in order to reveal the date when the stones would have been extracted.

Evidence of an 8000-year-old civilization in Kazakhstan

Mysterious Ancient Geoglyphs in Kazakhstan could be the ultimate evidence of an 8,000-year-old civilization that went unnoticed for decades. Thanks to images from Space, another incredible ancient mystery was revealed this year as satellite pictures of a deserted and remote area of Kazakhstan revealed giant geometric figures of squares, lines, crosses and circles, some of them approximately 200 meters in size, and only recognizable from the air. These are the ‘Nazca lines’ of Kazakhstan. Even though the discovery was made some eight years ago thanks to popular software ‘Google Earth’ when Russian archaeologist Dmitriy Dey found them, since then, several experts in the field have helped expand the research into these mysterious geometric figures. There are over 260 geoglyphs that have been discovered so far with the oldest one being around 8,000 years old, and most of them can be found near a Neolithic village of the area. The largest of them is a giant square composed of 101 raised mounds.

The Great Sphinx… 800,000 years old according to study

The starting point of these two experts is the paradigm shift initiated by West and Schoch, a ‘debate’ intended to overcome the orthodox view of Egyptology referring to the possible remote origins of the Egyptian civilization and, on the other, physical evidence of water erosion present at the monuments of the Giza Plateau.

A previously unknown civilization was discovered in remote Honduran jungle as researchers found what they believe is the legendary city of the Monkey God.

An expedition of archaeologists discovered in the jungles of Honduras the remains of an ancient city that could correspond to the legendary “White City” or “City of the Monkey God” according to ”National Geographic.” Archaeologists suggest that this discovery does not only reveal an ancient city but point to the fact that their finding could lead toward a previously unknown Mesoamerican Civilization, unknown to history.