UFO Hunters Claim There’s a Crashed UFO in This Photograph...

We’ve all seen some really weird things on some of the Martian images beamed back by NASA’s very own alien robots on the red planet, but there are some images that simply put, are weird as it gets. One example of such images below in this article.

According to Ufologists and a lot of comments on Social Networks, the object in the image is anything but a natural rock formation on Mars.

According to comments we are actually looking at some sort of ancient ‘alien drone’ on the surface of Mars. But how is that possible? Well today, anything is possible on Mars.

Not long ago, we believed the red planet was a desolate, and dry planet… now we know things are very different when it comes to Mars since scientists have found liquid water flowing on the surface of Mars and high amounts of Methane and mysteriously… traces of Xenon-129. The only process that we know that produces Xenon-129 is a nuclear explosion. (See image below).

As you can see from the above image, the Xenon Isotope mass from Mars is nearly identical to that found on Earth. This is one of the main factors that has led researchers like Dr. Brandenburg to suggest, that Mars had a developed civilization in the distant past and that this civilization had a terrible and cruel ending.

What does that mean? Well, it isn’t that far-fetched to theorize (at this point) that sometime in the distant past… the red planet was extremely similar to Earth, and intelligent beings might have developed on its surface.

When you start looking at Mars with different eyes, and with an open mind, things that were previously considered as impossible become possible. This is exactly what Dr. Brandenburg has told about Mars.

Dr. Brandenburg, who has a Ph.D. in Theoretical Plasma Physics from the University says that ancient Martians known as Cydonians and Utopians were massacred in the giant nuclear attack – and evidence of the genocide can still be seen today. (Read: Scientist says Mars was nuked by Aliens) 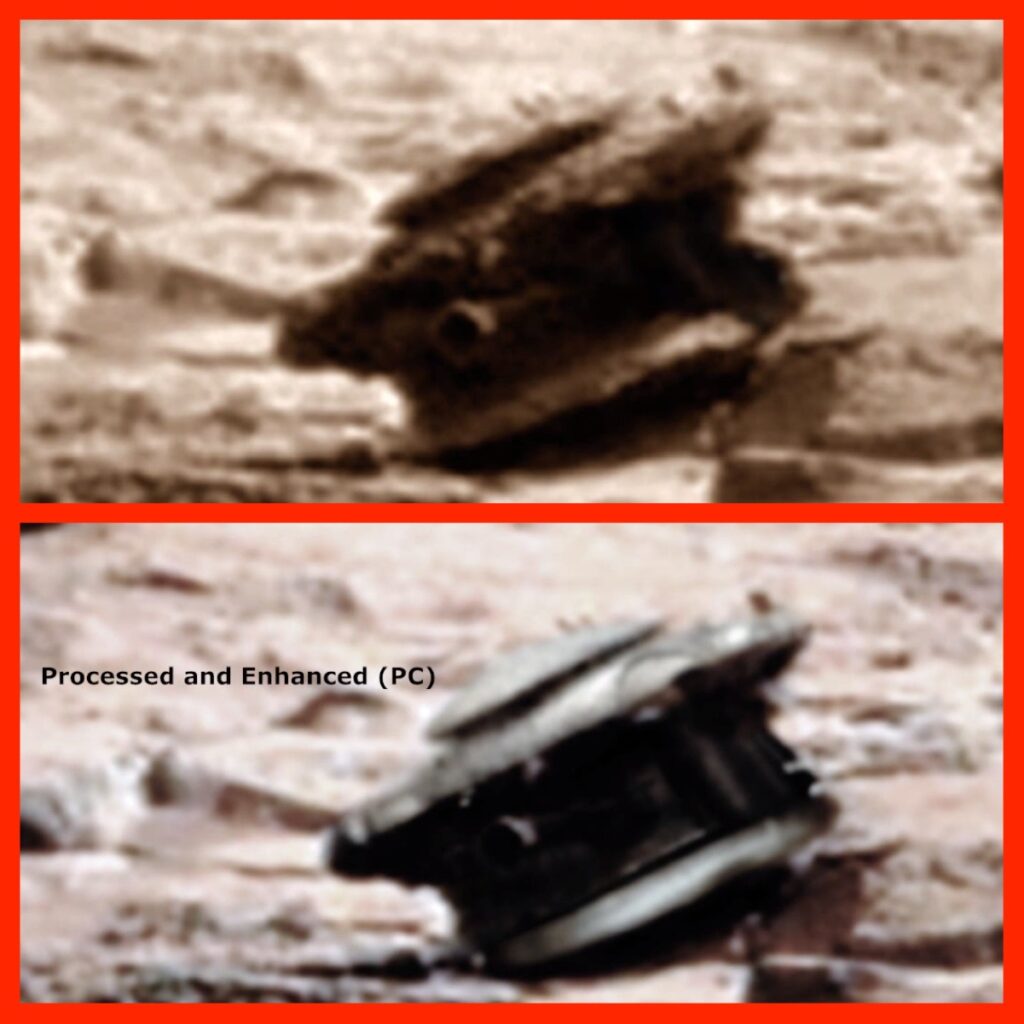 What if the object in question here is the ultimate evidence that such civilizations existed on Mars in the distant past? Is it possible that the object we are looking at isn’t a rock like many skeptics believe but an actual piece of hardware that survived the test of time, and is the ultimate evidence that points towards a very interesting history on Mars… a History that like many things on Earth has been secretly tucked away from society?

“The anomaly which appears to be the result of intelligent design was photographed by the rover as it surveyed the area around rock nest at Gale Crater. In my opinion this object is an extraterrestrial drone possibly built by the indigenous Martian populace or perhaps it was deployed by an off world alien species who were exploring the Martian surface. This object was found a few years back, but i will be re-visiting some old discoveries and shedding new light on what they could actually be. Drone footage is from the movie Oblivion.”

What are we looking at? The remains of an alien drone on the surface of the red planet? Or are we seeing things because or brain is tricking us into seeing it?

According to Brandenburg, “The high concentration of Xenon-129 atmosphere, the evidence from Krypton-80 and the detected pattern of excess abundance of Uranium and Thorium on Mars surface, relative to Mars meteorites, first seen by the Russians and now confirmed by the Mars Odyssey Spacecraft Gamma Ray Spectrometer, mean that the surface of Mars was apparently the site of massive radiological events, which created large amounts of signature isotopes and covered the surface with a thin layer of radioactive debris enriched in certain elements relative to its subsurface rocks. This pattern of phenomenon can be explained as due to two large anomalous nuclear explosions on Mars in the past.”

This would mean that it is very possible that we are seeing a lot of objects on Mars that are evidence of ancient Martians civilizations and the object in question might just be one of those mysterious artifacts that proves the red planet was inhabited by intelligent Alien life forms, sometime in the distant past of Earth’s cosmic neighbor.