12 Of The Most Powerful Ancient Gods Of Mesopotamia

Sumer, known as the “land of the kings”, was founded in southern Mesopotamia (modern day Iraq) between 4500 and 4000 BCE. It became one of the first civilizations ever established in history, where its people drained the marshes for agriculture, developed trade, and established industries such as weaving, metallurgy, and pottery.

Each city was protected by a particular god or goddess, with large temples built in the city center for them to reside in. The Gods of Mesopotamia still possessed the vestigial remnants of their earlier, elemental roles, such as air, fire, and thunder. 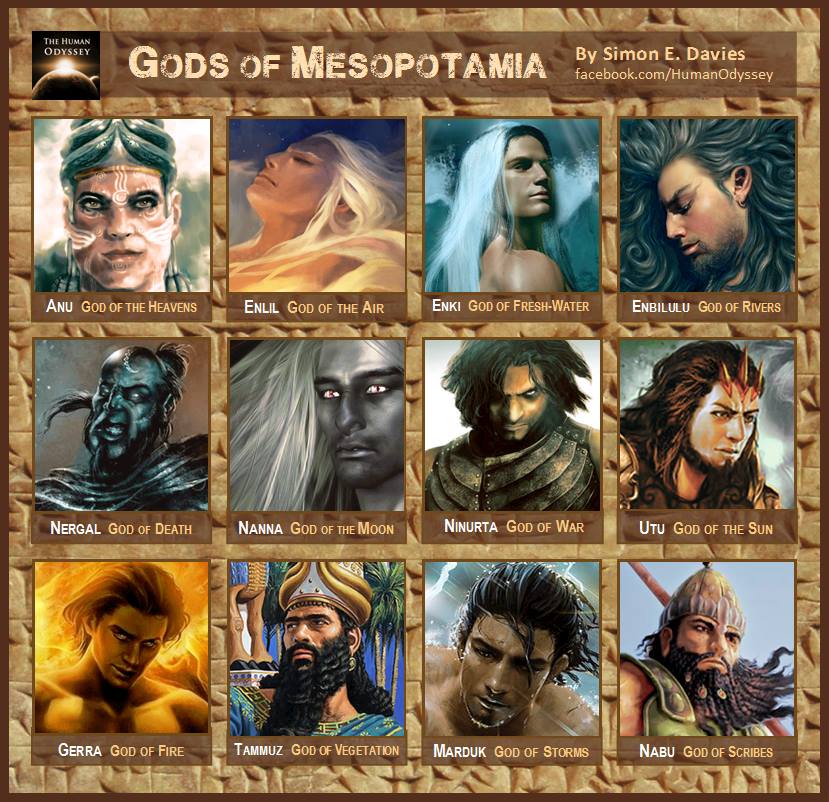 • Anu (God of heaven) was the original ruler of the Mesopotamian pantheon. He was a ethereal-god, known as the lord of constellations and master of spirits, who dwelt in the highest region of heaven and had the power to judge those who committed crimes.

• Enlil (God of the air) was patron to the city of Nippur, associated with the wind and open spaces. He was the only god who could reach out to Anu in heaven, because he ruled over the sky. It was Enlil who helped create humans, but he soon grew irritated of their commotion and tried to kill them by engulfing them in a great flood.

• Enki (God of freshwater) was the patron of the city of Eridu. He was known as the lord of knowledge, crafts and creation, who resided over all who dwelt on the earth plane. He was the keeper of a divine power known as ‘Me’ which were inscribed on stone tablets (said to hold the secrets of civilization). He is often depicted with a horned crown, dressed in the skin of a carp.

• Enbilulu (God of Rivers) was in charge of the river Tigris and Euphrates, both of which were considered to be very sacred. He ruled over the domain of agriculture, teaching men the craft of irrigation and farming. It is said he knew the secrets of water above and below the earth, granting him the power to make all things flourish.

• Nergal (God of Death) was a chthonic deity whose seat of power resided in Cuthah. He is often presented as half man half lion, known by all as the “raging king,” or “furious one.” He represented the sun of noon-time that brings darkness and chaos, thereby associating him with war, famine and pestilence. He also presided over the netherworld, where he governed the dead souls of the afterlife.

• Nanna (God of the Moon) was commonly known as the “lord of wisdom” who presided over the city of Ur. He personified the sacred knowledge of science, astronomy and astrology. Nanna was often presented as a great, winged bull flying across the crescent moon. In the astral system he is represented by the number 30 (which refers to the average number of days in a lunar month).

• Ninurta (God of War) was lord of Lagash, often depicted with a magical mace called Sharur. Not only a master of war, he was also associated with healing and surgery, helping to release humans from injury, illness and demonic possession. It was Enki, the fresh-water God, who mentored Ninurta’s in the ways of warfare and arcane knowledge (probably based upon the sacred teachings of the Me).

• Utu (God of the Sun) was in charge of truth, justice and law. He is usually portrayed as a man wearing a helmet, holding a sun disk and carrying a serrated sword. Every day Utu emerges from a mountain in the east, travelling across the Earth in a chariot, before returning to a cave in a west (creating dawn, midday and sunset respectively). Every night he descends into the underworld to decide the fate of the dead.

• Gerra (God of Fire) was said to possess a wisdom and skill so vast “that all the gods could not fathom it”. He was known to his followers as “lord of the fire and the forge”, capable of refining potent metals, purifying people of evil spirits and mastering any weapon known to man. It was claimed that he was undefeatable in battle.

• Tammuz (God of Vegetation) was a patrol deity associated with food and sustenance. He represented abundance in the spring, and the waning of life in the Autumn. The passing of summer came to represent death to Mesopotamian’s, and many rituals were practiced in Tammuz’s name, grieving for his passing and calling for his return in the coming year.

• Marduk (God of Storms) was the patron deity of Babylon, who slowly rose to power as the head of the Babylonian pantheon. He is a complex God associated with prophecy, resurrection and thunder. He rose to power during a civil war between the gods and their prodigy (known as the Igigi). It was Marduk who conquered Tiamat (a primeval goddess), elevating him to the status of God-king, ruling over the Heaven and the Earth. All nature, including man, owed its existence to him.

• Nabu (God of Scribes) was master of wisdom and writing. He was the son of Marduk, acting as his scribe and minister, and eventually became the keeper of the Tablets of Destiny, in which the fate of humankind was recorded. Nabu wears a horned cap, and stands with hands clasped, in the ancient gesture of priesthood. He rides on a winged dragon that is initially belonged to his father Marduk.