A massive stone sphere in Europe is the ultimate evidence...

Not only have researchers discovered a massive stone sphere in Europe, it is said that the oldest and largest Pyramids are also in Europe. Furthermore, linguistic and cultural scientists indicate that the oldest written language does not come from Mesopotamia but from the ancient Danube Valley Civilization (Europe) which was among the first civilizations to develop copper tools, advanced architecture, including two-story houses, design and production of furniture, and most importantly a writing system. All of this at a time when most parts of Europe were in the Stone Age and advanced development was nowhere to be seen.

The idea that Europe was once home to an incredibly advanced ancient civilization has captured the imagination and interest of people around the globe. While many people remain skeptic about the idea that a lost civilization existed in Europe in the distant past, several discoveries suggest history as we know it is incomplete.

A recent discovery offers further evidence to support the theories. Found in Bosnia –not far away from the Bosnian Pyramid complex—Dr. Semir Osmanagic, aka the ‘Bosnian Indiana Jones’ discovered a massive stone sphere that according to him dates back over 1,500 years, and belonged to a long lost civilization that inhabited the region before written history.

Interestingly, similar stone spheres have been found halfway around the globe in Costa Tica where there are hundreds of similar sphere scattered across the country. Until today, no one knows what their exact purpose was –even though some researchers claim the spheres were created by the Diquis culture.

Anyway, according to Dr.Osmanagic, there used to be around 80 similar spheres scattered across modern-day Bosnia and Herzegovina. In fact, just as some of the stone spheres from Costa Rica were destroyed, the ones in Bosnia were smashed as people searched for ‘treasures’ hidden inside of them.

But many people remain skeptical suggesting the massive stone sphere was created by a long-lost civilization but is the result of natural processes.

Dr. Osmanagic firmly disagrees saying that even though the material of the stone sphere needs to be examined, its “brown and red color point to very high content of iron,” suggesting that it is just one of the many pieces that clearly points to the fact that a technologically advanced civilization inhabited the region thousands of years ago. 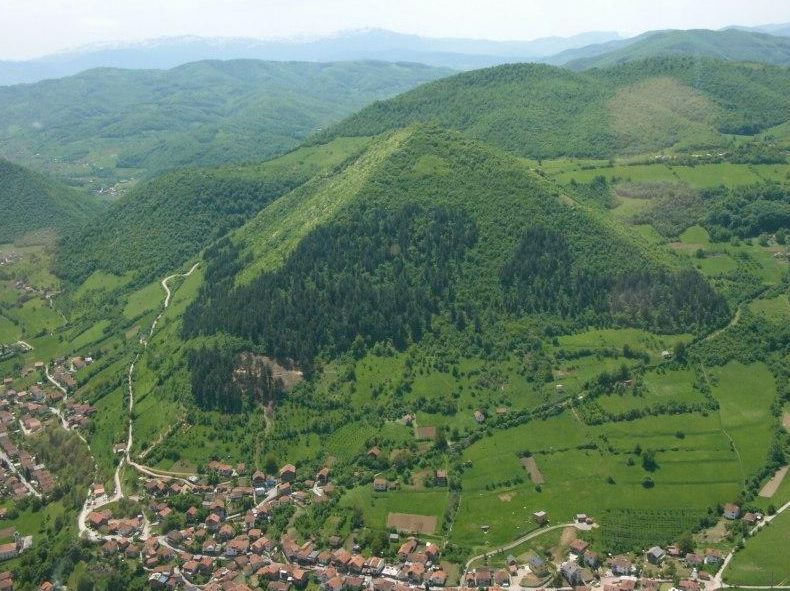 But if there really was a lost civilization that inhabited the region in the distant past, wouldn’t we have found evidence of their existence by now?

According to Dr. Osmanagic, we already have, but we are just too hooked on mainstream history to recognize a history-changing discovery like this.

In fact, according to Dr. Osmanagaic, not only does Bosnia and Herzegovina boast the largest stone sphere in Europe, but it also has the largest and oldest pyramids on the surface of the planet.

The Bosnian Pyramids located near the town of Visoko, northwest of Sarajevo are according to many the oldest man-made Pyramids that have been discovered on our Planet, while others firmly suggest they are nothing more than natural formations.

However, if you actually go there, visit the Pyramids and go inside the tunnels beneath the pyramids you come to realize that there’s something more to the entire story

According to measurements, the Pyramid of the Sun at Visoko with its 220 meters height, exceeds the Great Pyramid of Egypt, which measures 147 meters (height). Furthermore, the Pyramid’s orientation to the North is accurate with an error of 0 degrees, 0 minutes and 12 seconds.

In addition to the above, scientists have spotted an “ultrasound” beam at the Bosnian Pyramid of the Sun which comes in regular blocks of 9,3333 Hz with peaks up to 28.3000kHz. Surely that must be enough evidence of an artificial structure?

Furthermore, hydrophone recordings conducted in water pools within the Ravne tunnels showed the presence of ultrasound oscillations at 24 kHz and one octave up at 48 kHz whose amplitudes changed in a rhythmic manner.  A 38 kHz frequency also appeared erratically.  Interestingly, this is 14 kHz higher than the 24 kHz frequency, a difference frequency that is half of the 28 kHz frequency reported coming from the Pyramid of the Sun.

Remains of the Danube Valley civilization?

Many people might not know about the Danube Valley Civilization, but it is one of the most important ancient cultures to ever exist in Europe. In fact, it is one of the oldest civilization to exist in Europe, developing from around 5,500 and 3,500 BC in an area known today as the Balkans, a vast area of land that stretches from Northern Greece to Slovakia (South to North), and Croatia to Romania (West to East).

Interestingly, this ancient culture was one of the most influential and important cultures in south-eastern Europe, being among the first civilizations to develop copper tools, advanced architecture, including two-story houses, design and production of furniture, and most importantly a writing system.

All of this occurred while most parts of Europe were in the Stone Age, and advanced development was nowhere to be seen.

This ancient civilization from the Balkans developed unprecedented skills like weaving, leather processing, clothes manufacturing and they invented the wheel.

Curiously, it is said that the Danube Valley Civilization developed a written language which predates Sumerian writings.

According to Harald Haarmann, a German linguistic and cultural scientist, says the Danube script predates the Sumerian writings and should be considered as the oldest writing in the world. The inscriptions in tablets found from the Danube Valley Civilization date back to at least 5,500 BC, and the mysterious symbols that make up the written language are yet to be deciphered.