A mysterious object ‘woke up’ a supermassive black hole at...

Three space telescopes have detected an increase in the frequency of X-flares eruptions of a giant black hole located at the center of our galaxy. After a new long-term monitoring process, scientists are trying to figure out if this is a normal behavior that went unnoticed because of limited supervision, or if it is possible that these flares are triggered by the recent passage of a mysterious object. By combining information provided by NASA’s Chandra X-ray Observatory and XMM-Newton, with observations from the Swift satellite, astronomers were able to carefully track the activity of the supermassive black hole in the Milky Way during the last 15 years.

The supermassive black hole, aka Sagittarius A, weighs just over 4 million times the mass of the sun and the X-Rays are produced by hot gas flowing towards the black hole. The new study reveals that Sagittarius A, only produces an average of one bright X-ray flash every ten days. Over 150 observations from NASA’s Chandra X-ray and XMM-Newton Observatory took place from September 1999 to November 2014. Mysteriously, in the past year, there has been a tenfold increase in the rate of bright flashes of Sagittarius A, about one per day. The increase in activity occurred just after a mysterious object called G2 approached Sagittarius A.

“For several years, we’ve been tracking the X-ray emission from Sgr A*. This includes also the close passage of this dusty object” said Gabriele Ponti of the Max Planck Institute for Extraterrestrial Physics in Germany. “A year or so ago, we thought it had absolutely no effect on Sgr A*, but our new data raise the possibility that might not be the case.” 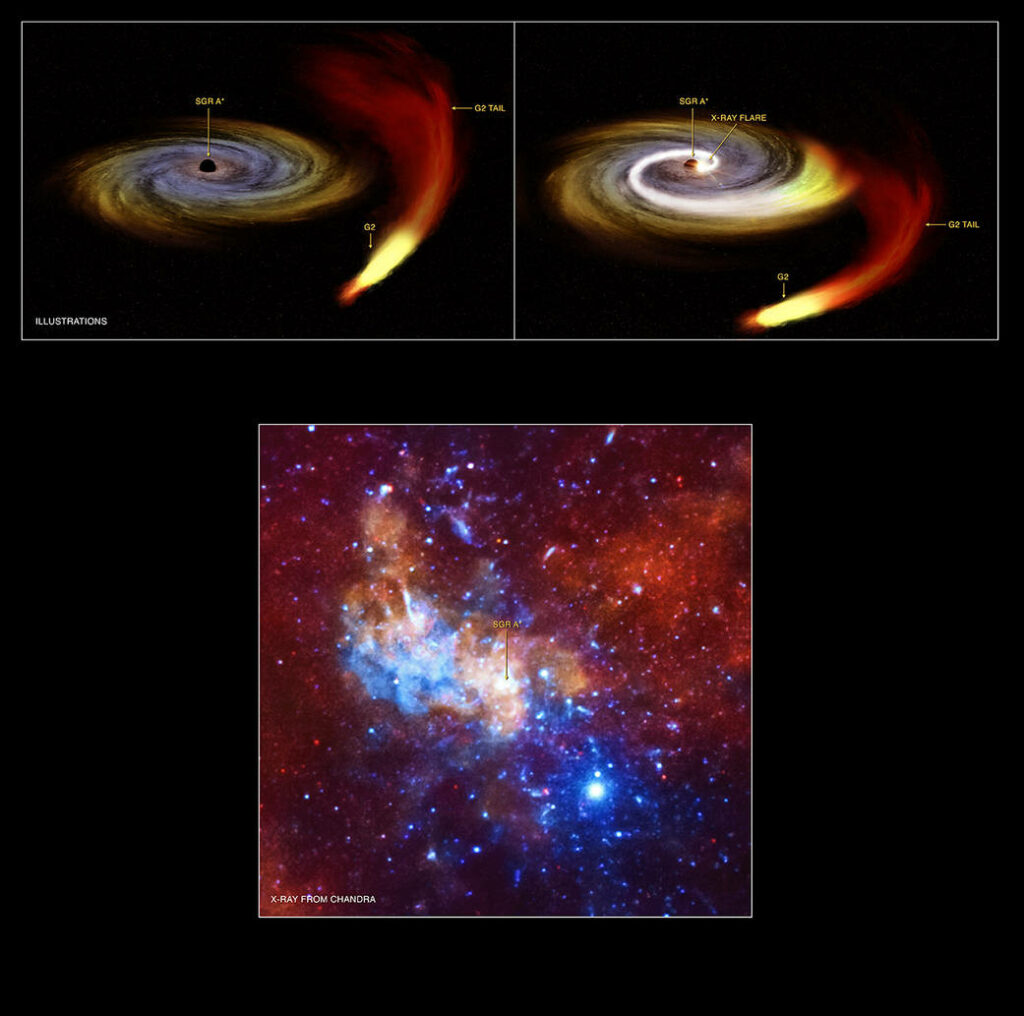 Researchers previously thought that object G2 was an extended cloud of gas and dust, but after passing near Sagittarius A in 2013, the appearance of the object did not change much apart of being stretched by the gravity of the black hole, this has led experts to suggest that the mysterious object referred to as G2 isn’t just a cloud of gas and dust but a star swathed in a dusty cocoon, an incredible phenomena in space.

“There isn’t universal agreement on what G2 is,” said Mark Morris of the University of California at Los Angeles. “However, the fact that Sgr A* became more active not long after G2 passed by suggests that the matter coming off of G2 might have caused an increase in the black hole’s feeding rate.”

Researchers say that it is possible that the increased activity from Sagittarius A may be a common trait among Black Holes and unrelated to the passing of object G2 since astronomers have identified other black holes that behave like Sagittarius A.

“It’s too soon to say for sure, but we will be keeping X-ray eyes on Sgr A* in the coming months,” said co-author Barbara De Marco, also of Max Planck. “Hopefully, new observations will tell us whether G2 is responsible for the changed behavior or if the new flaring is just part of how the black hole behaves.”

A paper on these findings has been accepted by the Monthly Notices of the Royal Astronomical Society. A preprint is available online.