A set of mysterious Pyramids have been spotted on the...

The discovery of the two pyramids—one which in design resembles the Great Pyramid of Giza—was made off the coast of the Bahamas.

A recently uploaded video shows what appear to be a set of strange underwater formations near New Providence, the most famous island in the Bahamas.

The structures sighted through Google Earth appear to have a pyramidal shape, such as those temples that lie just over a thousand kilometers to the west, in Mayan and Aztec lands allegedly.

The video was posted by SecureTeam10 on YouTube. Scott Waring, one of the channel’s contributors, says he found the structures while scouting the ocean floor for anomalies.

“I found these two pyramids on the ocean floor near the island of New Providence, not far from Florida,” says Waring.

“The lines forming the pyramids are easily distinguishable, and to me, they prove that the nearest island was once inhabited by advanced civilizations such as the Aztecs.”

Tyler Glockner, the owner of the channel where the video was published, adds that “they are obviously very old pyramids” and that, despite the time elapsed, “they have been kept in relatively in good condition” because they were not exposed to the Caribbean surface climate. 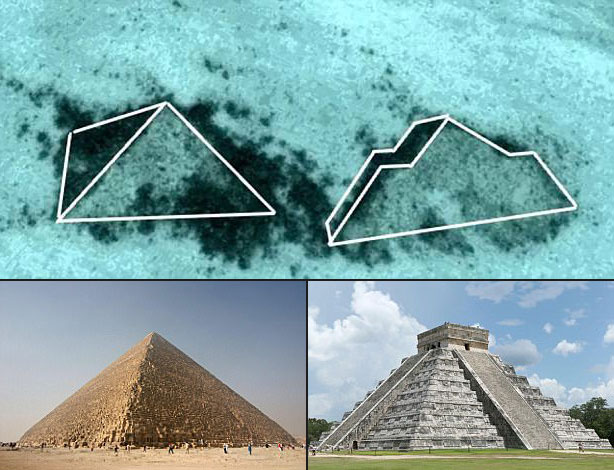 The ‘researchers’ point out how the two sunken pyramids are not the same, as one appears to be a perfect three-sided structure, like the Great Pyramid of Giza, while the other structure apparently is more similar to stepped pyramids, like the famous Mayan temple, Chichen Itza.

As for the comments received from the users, some prefer the explanation given by Waring and Glockner, while others attribute it to a whimsical natural formation whose singularity is present only because of a simple game of shadows.

There are also those who have asked if these alleged underwater pyramids are aligned in latitude with those in Egypt.

The answer to the latter would be a no. Although it does pass somewhat near it.

Obviously, associations of the Pyramids with the remains of the mythical Atlantis did not lack in comments posted by people from all around the globe who rushed to see the video posted on YouTube.

The area near the Bahamas has been filled with stories about underwater structures, Pyramids, Crashed spaceships and entire sunken cities, and oh, the Bermuda triangle which is according to some is the area where the mythical city/continent of Atlantis once existed.

In the past, there have been numerous reports of underwater structures; Pyramids, roads, and other monuments discovered across the world.

Perhaps one of the most notorious discoveries was the underwater structures discovered just off the coast of Cuba.

Over 15 years ago a team of explorers found anomalous structures off the western Coast of Cuba. Sonar survey showed a set of intricate stone formations 650 meters beneath the Caribbean Sea.

Strangely, no one has ever explored the sunken city after it was found.

National Geographic published an article about the sunken city when it was found and promised to perform follow-up investigations, strangely, they to pulled out of the investigation.