The whole fuzz about Alien mega structures and Alien life started around three weeks ago when astronomers pointed out that a star located 1400 light years from earth, by the name KIC 8462852, display’s strange dimming patterns. Nearly a month after the anomalous discovery, and after SETI tuned in to listen to the Star hoping to find an intelligent signal the world’s top alien-hunters insist that the mysterious object spotted around the distant star could in fact be the result of intelligent extraterrestrial civilizations.

The group of astronomers who discovered the anomalous behavior considered several possibilities that could explain the dimming. Even though there are a couple of theories that suggest it is due to natural phenomena (a weird undiscovered phenomenon), there is one that is favorite among many people and the media. This theory says that it is very likely that Alien beings built a megastrcuture near the star and Seth Shostak from the SETI Institute seems to agree. 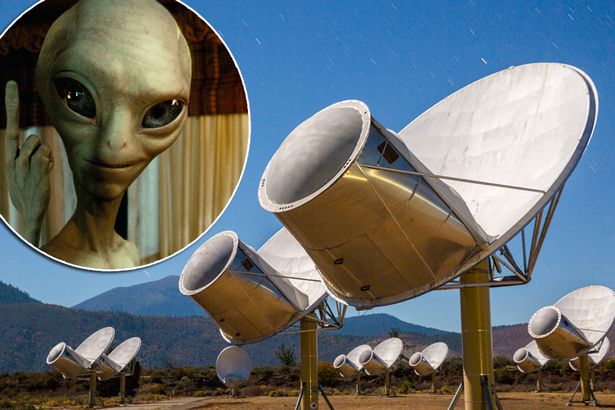 The history of astronomy tells us that, every time we thought we had found a phenomenon due to the activities of extraterrestrials, we were wrong,” SETI Institute astronomer Seth Shostak said in a statement. “But although it’s quite likely that this star’s strange behavior is due to nature, not aliens, it’s only prudent to check things out.”

However, Set Shostak told Mail online that his team has been unable to disprove the theory that astronomers actually spotted a giant artificial structure around the star, responsible for the mysterious light patters around the star. Many researchers (who would love the idea of an alien civilizations out there) suggest, that the mystery object that has everyone talking about KIC 8462852 is in fact a huge solar plant built around the star in order to harvest energy from it. (source)

“You could say that maybe this is a Dyson sphere built by an advanced society, a ring world or some other kind of megastructure,” he told Mirror Online.

SO, for the past couple of weeks researchers have used the Allen Telescope Array in order to search the star and its vicinity for conclusive evidence that would support the “Alien civilizations Megastructure” theory. SETI scientists have also looked at microwaves which may have been the product of “repair rockets” that could exist near the structure for service purposes. You would imagine that a structure that big would need a lot of repairs and maintenance right?

“This is the first time we’ve used the Allen Telescope Array to look for relatively wide-band signals, a type of emission that is generally not considered in SETI searches,” SETI Institute scientist Gerry Harp said in the same statement.

So far, none of the telltale sign have been spotted but Shostak believes this could be because our equipment just cannot spot the alien signals.

“We didn’t find the signals,” he continued.

“But this is like peering down at Africa from the window of the International Space Station, failing to spot any large animals and then concluding there are no elephants on the whole continent.

“We can’t yet rule out the possibility [that aliens built a huge structure around Tabby’s Star].”

According to writings by space.com,  researchers noted that any society capable of building such advanced technology should have the ability to access energy approaching 1 octillian watts — that’s 10 billion times a hundred billion, or 10^27. (Source)

All of this means that so far no signals have been detected, this however does not mean ET isn’t there, it might just be that our equipment cannot pick it up. Whether KIC 8462852 is an Alien “stronghold’ is something we will find out in the near future. So far, we can only continue searching for signals and telltale sign that could point us in the right direction.

Shostak firmly believes that mankind will find intelligent beings in the universe within 2000 year, this however could be much sooner if our technological development continues in the right direction.