Alien Hunters Want NASA To Explain This ‘Formation Of UFOs’

NASA cannot explain the formation of UFOs seen in an image from the STS-100 mission. 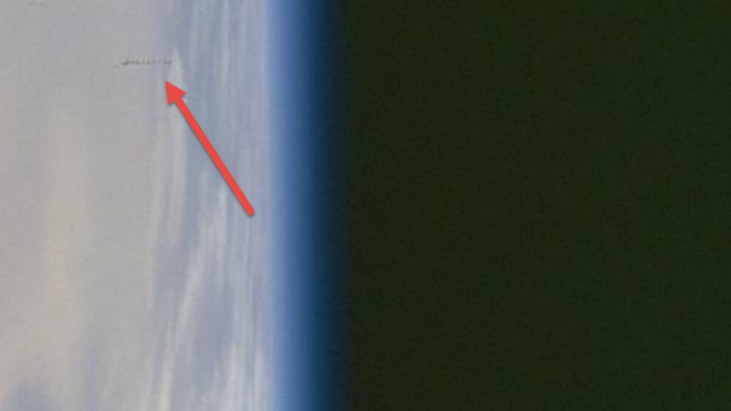 UFO hunters have revisited one of the most enigmatic UFO mysteries of Space Shuttle History. The mysterious case of an unexplained ‘formation of UFO’s’ seen in NASA photograph taken by the STS-100 mission in 2001, when Space Shuttle Endeavor traveled to the International Space Station (ISS) remains as one of the top, unexplained images in Space Shuttle history.

While the mysterious image wasn’t discovered recently, UFO hunters argue that ever since the UFO’s were spotted in the image flying in a perfectly straight line years ago, NASA went on to delete the images from their website as they to with most of the unexplainable images in their archives.

The fact that NASA has deleted yet another controversial image where alleged UFOs have been identified has caused a massive uproar in the UFO community as people around the world have accused the National Aeronautics and Space Administration of trying to hide the truth about UFOs and Alien life from the public.

However, when the image later reappeared at a completely different section on NASA’s website, UFO hunters claimed that NASA was forced to reupload the image because it pointed to the fact that NASA deletes images where suspected unidentified objects appear in.

Interest in the 15-year old image was reignited after numerous UFO websites including The Black Vault, started reviewing this and other images from NASA where unidentified flying objects appear in.

The disclosure movement led paranormal research website The Black Vault to take another look at the controversial image. New observations by The Black Vault community readers and editors raised numerous questions about the image.

An interesting video posted in 2013 by YouTube user UFOvni2012 includes several closeups of the mysterious UFO formation in detail.

The Black Vault stresses that UFO hunters were right when they located the anomalous UFO formation in the STS-100 mission calling on NASA to give the public an explanation of the anomaly.

According to UFO hunters, NASA’s silence just means that the space agency has been covering up UFO related images for decades, trying to hide the truth from the public.

The Black Vault argues that new investigations on the image disprove claims by skeptics which suggest that the multiple UFOs seen in the STS-100 mission are in fact one photograph anomaly due to long exposure of the moving object or multiple images laid on top of each other (As NASA does with other images) in order to bring out details.

The Black Vault suggests that while there are several newly discovered anomalies which are most likely satellites, space debris or other photographic artifacts, their existence only helps disprove the idea that the alleged formation of UFOs seen in the image is, in fact, a single piece of space debris, or satellite that resembles several UFOs flying in formation due to long exposure of the image, or several photographs laid on each other.

UFO researchers suggest that long exposure of moving object usually results in a long streak of light as opposed to the multiple and distinctive objects which appear arranged in a straight line, suggesting that the image does, in fact, show a fleet of UFOs and not a single object being photographed in movement.

This isn’t the first time that several UFO’s have been spotted above Earth, in fact, one of the most famous and mysterious sightings to ever take place in space is that of NASA’s STS-48 Space Shuttle Discovery mission.

In the footage taken on board the Space Shuttle, we see numerous bright UFOs which appear to be flying under intelligent control, displaying movements that cannot be associated with space debris or ice particles as some have suggested in previous attempts trying to debunk the UFO theory.