An unknown force is pulling the Milky Way and other...

Researchers are struggling to understand WHAT is ‘pulling’ our galaxy, the Milky Way, and other galaxies towards IT at an incredible speed of 22 million kilometers per hour.

Just as the movement of tectonic plates shows the properties of the interior of the Earth, the motions of galaxies provides information about the main constituents of the Universe: Dark Matter and Dark Energy. Dark matter is an invisible material whose presence can be demonstrated only by its action on the movements of galaxies and stars, not emitting or reflecting light. Dark energy is THE mysterious force behind the universe and its acceleration.

Interestingly, there are many researchers that theorize about ‘Multiverses’, other universe located extremely close to our own, perhaps even only a millimeter away. The extreme proximity and the existence of other universes have several consequences to our universe, like gravity that is ‘leaking through’ into our universe, which, according to numerous scientists, could be responsible for the production of dark energy and dark matter which make up around 96% of the ‘known’ universe.

This unknown force which has been dubbed as “The Great Attractor” is pulling our galaxy and everything around it towards a specific point in space, located approximately 250 million light-years away. Basically, the Great Attractor is considered by researchers as a ‘gravitational anomaly’ located within the vicinity of the Hydra-Centaurus Supercluster at the center of the Laniakea Supercluster. Adding to the mystery is the fact that the ‘Great Attractor’ happens to lie in a direction in the sky referred to as the ‘Zone of Avoidance’. Towards that direction, there is so much dust and gas that our satellites and telescopes can’t see very far in the visible spectrum.

The Great Attractor is certainly there (because we see its gravitational influence), but the major portion of the mass that must be there cannot be seen in our telescopes. (source)

Researchers discovered indications of the mysterious force back in the 70’s. As time passed by and our telescopes got bigger and better we were able to learn more about that specific region in space. In time, astronomers discovered that there is a giant supercluster of galaxies known as the Norma Cluster, which has a mass of about 1,000 trillion suns or thousands of galaxies. The exact position of the mysterious force was pinpointed in 1986.

We can only observe that the Milky Way and everything around is being pulled by that ‘something’ and that mysterious force must be something massive, strange and fascinating, something that is both extraordinary and scary.

A gigantic concentration behind the Great Attractor: An ‘even’ Greater Attractor?

As we mentioned above, efforts to study the Great Attractor in the past were hampered by its location in the ‘Zone of Avoidance,’ but, a study called CIZA was the first to search and investigate the nature of the Great Attractor a couple of years ago.

“X-rays can penetrate even regions that are extremely obscured by gas and dust, and galaxy clusters are sources of X-rays. This is what prompted us to attempt to map the distribution of galaxy clusters behind the plane of the Milky Way using X-ray observations,” explains Ebeling, who initiated the survey in 1998.

The CIZA project managed to find a significant concentration of galaxies which are located behind the great Attractor, finding an even GREATER Attractor behind the original one, near the Shapley Supercluster located approximately 500 million light-years away or four times the distance to the Great Attractor region. 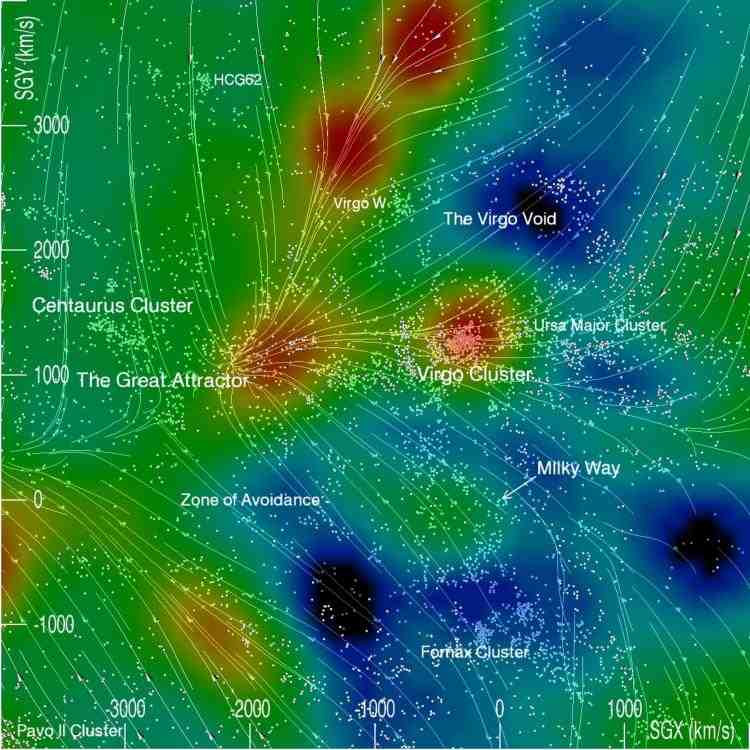 “One of our goals was to uncover the true mass of the Great Attractor. What we found is that it is not that great after all,” says Kocevski.

The study confirmed for the first time that the presence of structures more distant than the Great Attractor directly influence the Milky Way and are pulling our galaxy and many others towards it.

While researchers such as Kocevski believe that mass concentrations such as the Great Attractor were fairly common in the Universe, implying that the early Universe contained much more mass that previous estimates, other researchers remain skeptical about the CIZA study and the mysterious force that continues to pull every one of us towards it, near the Zone of Avoidance at the center of the Laniakea Supercluster.

X-ray observations with the ROSAT satellite then revealed that Abell 3627 is at the center of the Great Attractor.

Preprints of papers submitted to The Astrophysical Journal on the Milky Way’s motion and the CIZA survey can be found at: