A grave containing a male and a female facing each other has been discovered by archaeologists in Kazakhstan, raising questions about whether or not the pair were lovers.

The history of Kazakhstan is complex and fascinating. Once a part of the Mongol Empire and the Soviet Union, this nation just south of present-day Russia has a history that goes back even further to the Bronze Age four millennia ago when tribes roamed the territory as nomads and fought as noble warriors on horseback and chariots.

According to a History of Kazakhstan:

The territory of Kazakhstan was inhabited by tribes of the so called Andron and Begazy-Dandybay culture. They were engaged in farming and cattle-breeding, they were fine warriors who handled combat chariots marvelously. To this day we can see images of chariots drawn on rocks where ancient people would arrange their tribal temples and sanctuaries with the firmament as their natural cover. On the surfaces of black cliffs burnt with the sun people would chisel out scenes of dances, images of sun-headed deities, mighty camels and bulls as impersonations of ancient gods.

Burial mounds of noble warriors scattered all throughout Kazakh steppes are known for magnificent size of mounds and burial vaults proper. Particularly famous are such necropolis in the steppes of Sary-Arka and Tagiskent in the Transaral area. People of that epoch were not only fine warriors, shepherds and farmers but also skilled metallurgists. They would take bronze and manufacture axes, knives, daggers and various decorations thereof.

During that time, a young man and woman died and were buried together in a grave that has been long forgotten. For the last 4,000 years, the possible lovers have been looking into each other’s eyes in an eternal gaze. And they would have remained forgotten had researchers at the Taldy Archaeological Park not excavated the Karazhartas area in which they were found.

“The cemetery consists of five mounds, and now we are examining its fourth quarter,” archaeologist Igor Kukushkin said. “The cemetery found was a cemetery found last year. But here and there the man and woman are facing each other, and at the place where they were buried, they were one after the other.”
“Probably, the young couple found might be in the aristocratic family. It is clear that the cemetery belongs to rich people. The girl has a twisted bracelet with rounded fingers and round solvent trimmings with ornaments. And the main thing – there were golden sockets.” 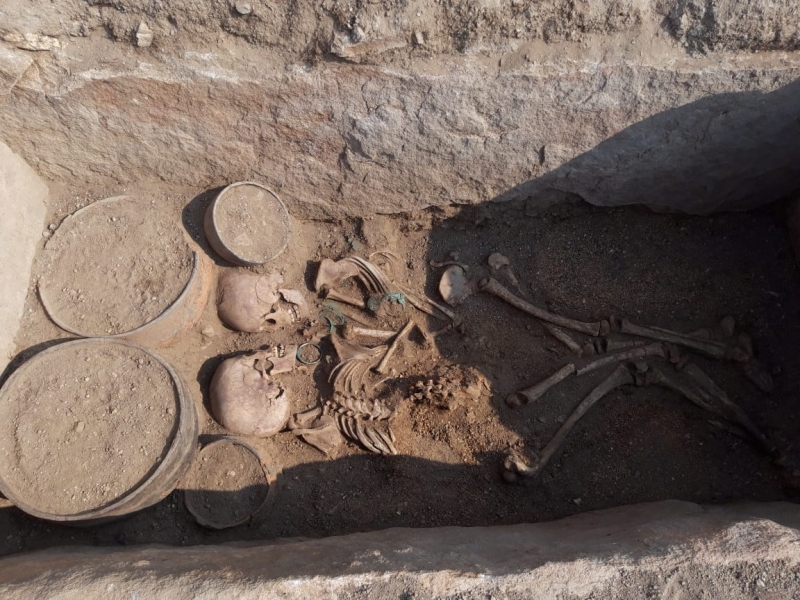 The grave dates back to the Bronze Age during a time of turbulent violence in Kazakhstan, and it’s possible the two lovers, who have been identified as teenagers at the time of their death, could have been victims of an attack.

The burial ground is primarily occupied by those of the ruling class at the time, and even includes war chariots that were used in battle.

“In the Central Kazakhstan Begazy-Dandybay culture is the most extensive,” Kukushkin explained. “There are very large tribes here. This is the era of heroes when the chariot appeared. It was an unexpected time of attacks and strife, and then a chariot came from the front.”

But that’s not all the team found.

According to the Karaganda regional government

Among other things are bronze bracelets, knives, festive lace beads for women, bronze beads, and horse harness. Dauren Zhusupov, deputy director of the regional museum of local history, said that in one of the burial mounds, archaeologists have found ceramic dishes.

The team also found ruins of an ancient defensive castle along with a tomb that yielded no finds of artifacts or bodies.

“It is the first frontal defensive of Karazartas-2 burial ground,” Zhusupov said. “We have studied it this year. First, the castle is entirely stone. Its diameter is 21 meters and the height is 2 meters.”

“Secondly, the building has been well preserved, and the barrow is made of several enclosures. Another distinction is that the finds have not come out of the tomb. As a result of the research, about 40 fragments of ceramic dishes, a crossbar, and a three-dimensional bronze arrow were found.”

“Ceramics refers to the Early Iron Age. No human bones were found here. That is, the burial was without accessories and without human body.”

While it’s very likely the pair found together were lovers, it’s also possible they may have been siblings. If that’s the case, this find just got a little creepy. It’s probably best to assume they were teen lovers who died tragically. Regardless, the new finds continue to demonstrate that Kazakhstan has a lot to tell the world about their history.

An earlier ‘Romeo and Juliet’ grave

This grave from Karazhartas is thought to be from 4,000 years ago, but a similar grave from 5,000 years ago was found in the the Karaganda region of Kazakhstan as reported in 2018. The grave contained a couple who were buried spooning each other on their sides and were called the ‘Romeo And Juliet Couple.’

According to Archaeology News Network:

“Archaeologist Dr Igor Kukushkin – in charge of the excavation – said there are unanswered questions about whether the Romeo and Juliet couples were together in their life times, in which case it was likely one made the ultimate sacrifice took their own life or was killed to be buried with the other.”

The couple, who may or may not have been lovers, were buried with two horses laying back to back that were probably sacrificed to pull a “chariot into the afterlife.” The man was believed to be an elite Bronze Age charioteer and was buried with arrows and a metal dagger. The circumstances of their deaths is also a mystery.

See more on this discovery from Rusty’s History Zone below: