Did ancient mankind know the secrets of Levitation?

Did the ancients know the secrets of levitation?

Is it possible that our ancient ancestors knew the secrets of levitation? Technology that has since been lost in time and space?

Is it possible that great ancient civilizations like the ancient Egyptians, Olmec, Pre-Inca and Inca deciphered the secrets of levitation and other technologies that have been labeled by today’s society as impossible, mythological?

And if they did, is it possible that they used these ‘forgotten technologies’ to erect some of the most incredible ancient constructions on our planet?

There are dozens of amazing megalithic sites on our planet that defy our modern-day capabilities: Tiahuanaco, The Pyramids of the Giza plateau, Puma Punku, and Stonehenge among others. All of these sites were built using incredible blocks of stone that weight up to hundreds of tons, blocks of stone that our modern-day technologies have a hard time dealing with. So why did the ancient use such megalithic blocks of stone when they could have used smaller blocks and achieve a similar if not identical result?

13.000 feet above sea level stand the incredible ancient ruins of Tiahuanaco and its incredible ‘Sun Gate’. “La Puerta del Sol” or Sun Gate is an elaborately carved structure that is composed of stone blocks that weigh over ten tons. It is still a mystery how ancient managed to cut, transport and place these blocks of stone.

The Temple of Jupiter located in Baalbek, Lebanon is another masterpiece of ancient engineering where huge blocks of stone were put together to form one of the greatest ancient sites on Earth. The foundation of the Temple of Jupiter contains three of the most massive stones ever quarried by mankind. The three foundation blocks together weigh 3.000 tons. If you ask yourself what type of vehicle would be used to transport them, the answer is NONE. Somehow, ancient man was able to quarry, transport and put them into place with such precision that not a single sheet of paper could fit in-between them.

At Baalbek, we have the ‘stone of the pregnant women’ which is one of the largest stones ever cut my mankind, with a weight of 1,200 tons.

The Egyptian pyramids are one of the ‘mission impossible’ constructions that have caused amazement among everyone who has had the opportunity to visit them. Even today, no one knows for a fact how ancient man was able to erect such marvelous structures. Mainstream science has proposed that it took a workforce of around 5000 men, working for twenty years to build them using ropes, ramps, and brute force.

Abul Hasan Ali Al-Masudi, known as the Herodotus of the Arabs wrote about how the ancient Egyptians built the pyramids in the distant past. Al-Mas’udi was an Arab historian and geographer and was one of the first to combine history and scientific geography in a large-scale work. Al-Masudi wrote about how ancient Egyptians transported the huge blocks of stone used to build the pyramids. According to him, a ‘magic papyrus’ was placed under each of the blocks of stone which allowed them to be transported. After placing the magical papyrus beneath the blocks, the stone was struck with a ‘metal rod’ that made the blocks of stone levitate and move along the path paved with stones and fenced on either side by metal poles. This allowed the stones to move for around 50-meters after which the process had to be repeated in order to get the blocks of stone to where they needed to be. Was Al-Masudi objective when he wrote about the pyramids? Or is it possible that just like many others, he was simply amazed by their magnificence, concluded that the ancient Egyptians must have used extraordinary means to construct the pyramids?

What if, levitation technology was present on Earth in the distant past and ancient civilizations like the Egyptians, Inca or Pre-Inca knew the secrets of levitation?

What if Levitation was possible in the past… but even today? 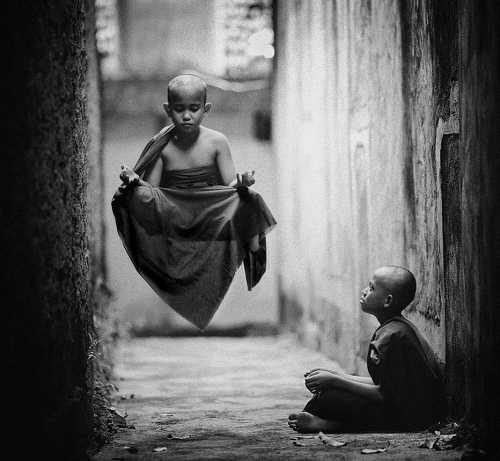 According to Bruce Cathie, in his Book ‘The Bridge to Infinity’, priests in a monastery high in the Tibetan Himalayas accomplished the feats of levitation. Here below are excerpts from a German article:

A Swedish doctor, Dr. Jarl… studied at Oxford. During those times he became friends with a young Tibetan student. A couple of years later, it was 1939, Dr. Jarl made a journey to Egypt for the English Scientific Society. There he was seen by a messenger of his Tibetan friend, and urgently requested to come to Tibet to treat a high Lama. After Dr. Jarl got the leave he followed the messenger and arrived after a long journey by plane and Yak caravans, at the monastery, where the old Lama and his friend who was now holding a high position were now living.

One day his friend took him to a place in the neighborhood of the monastery and showed him a sloping meadow which was surrounded in the north-west by high cliffs. In one of the rock walls, at a height of about 250 metres was a big hole which looked like the entrance to a cave. In front of this hole there was a platform on which the monks were building a rock wall. The only access to this platform was from the top of the cliff and the monks lowered themselves down with the help of ropes.

In the middle of the meadow. about 250 metres from the cliff, was a polished slab of rock with a bowl like cavity in the center. The bowl had a diameter of one metre and a depth of 15 centimeters. A block of stone was maneuvered into this cavity by Yak oxen. The block was one metre wide and one and one-half metres long. Then 19 musical instruments were set in an arc of 90 degrees at a distance of 63 metres from the stone slab. The radius of 63 metres was measured out accurately. The musical instruments consisted of 13 drums and six trumpets. (Ragdons).

Behind each instrument was a row of monks. When the stone was in position the monk behind the small drum gave a signal to start the concert. The small drum had a very sharp sound, and could be heard even with the other instruments making a terrible din. All the monks were singing and chanting a prayer, slowly increasing the tempo of this unbelievable noise. During the first four minutes nothing happened, then as the speed of the drumming, and the noise increased, the big stone block started to rock and sway, and suddenly it took off into the air with an increasing speed in the direction of the platform in front of the cave hole 250 metres high. After three minutes of ascent it landed on the platform.

Continuously they brought new blocks to the meadow, and the monks using this method, transported 5 to 6 blocks per hour on a parabolic flight track approximately 500 metres long and 250 metres high. From time to time a stone split, and the monks moved the split stones away. Quite an unbelievable task. Dr Jarl knew about the hurling of the stones. Tibetan experts like Linaver, Spalding and Huc had spoken about it, but they had never seen it. So Dr Jarl was the first foreigner who had the opportunity to see this remarkable spectacle. Because he had the opinion in the beginning that he was the victim of mass-psychosis he made two films of the incident. The films showed exactly the same things that he had witnessed.

Today we have made ‘technological’ advancements which are making possible objects levitate.

One of those examples is the ‘hoverboard’ by Lexus. The Lexus hoverboards use magnetic levitation which allows the artifact to remain in the air without friction. In addition to the incredible design of the Hoverboard, we see smoke coming out of it; this is due to the liquid nitrogen used to cool down the powerful superconducting magnets that make its existence possible.

Is there a possibility that somehow, thousands of years ago, ancient mankind used a similar levitation technology that allowed them to transport huge blocks of stone without much difficulty?