In addition of depicting Giants dragons and cannibals, the lower left corner of the map, near “Tierra del Fuego,” an archipelago off the southernmost tip of the South American mainland, across the Strait of Magellan, illustrates what seems to be a mermaid holding an object that eerily resembles a flying saucer.

Americae Sive Quartae Orbis Partis Nova Et Exactissima Descriptio is a map made by Diego Gutiérrez and Hieronymus Cock, published in 1562 in Antwerp.

The map: A New and Most Exact Description of America or The Fourth Part of the World, encompasses the eastern coast of North America, the entire Central and South America and parts of the western coasts of Europe and Africa.

This extremely detailed map of the American continent is made up of six neatly joined engraved sheets. It measures a staggering 93×86 centimeters, reason why it remained the largest map of America for a century. It the largest Spanish printed map of America before the mid-eighteenth century.

There are two extant copies of the map, one in the Library of Congress (Washington, D.C.) and the other in the British Library (London).

It was an official map, recognized by Philip II, King of Spain and his half-sister Margarita de Parma, regent of the Netherlands.

It represents Spanish domination in the new world, defining the limits of the sphere of authority of Spain while recognizing the French and Portuguese presence in the continent.

In this sense, there are three coats of arms represented on the map.

Although a latitude scale does not appear, the Equator and the Tropics of Cancer and Capricorn are clearly seen and the measurements between these fixed latitudes can help in determining the distances of the entire map.

The map offers a rich illustrated view of America full of names and images that had become popular in Europe after the Discovery.

The map correctly recognizes the presence of the Amazon and Paraná river basins, Lake Titicaca, the location of Potosí, Mexico City, Florida and several points along the coast.

However, in addition to its importance and extremely rich history, this ancient map illustrates quite a few peculiar things.

The giants of Patagonia

The Patagones or Patagonian giants are a mythical people of giants that appeared in the first European reports on the coast of the Patagonia region in the southern zone of South America.

It is postulated that the origin of the legend would be based on the Tehuelche tribes that inhabited the area.

The first mention of this mythical people is the story of Fernando de Magallanes’ trip around the world.

In this text, it was claimed to have seen them on the southern coast of South America on the road to the strait, in the year 1520. 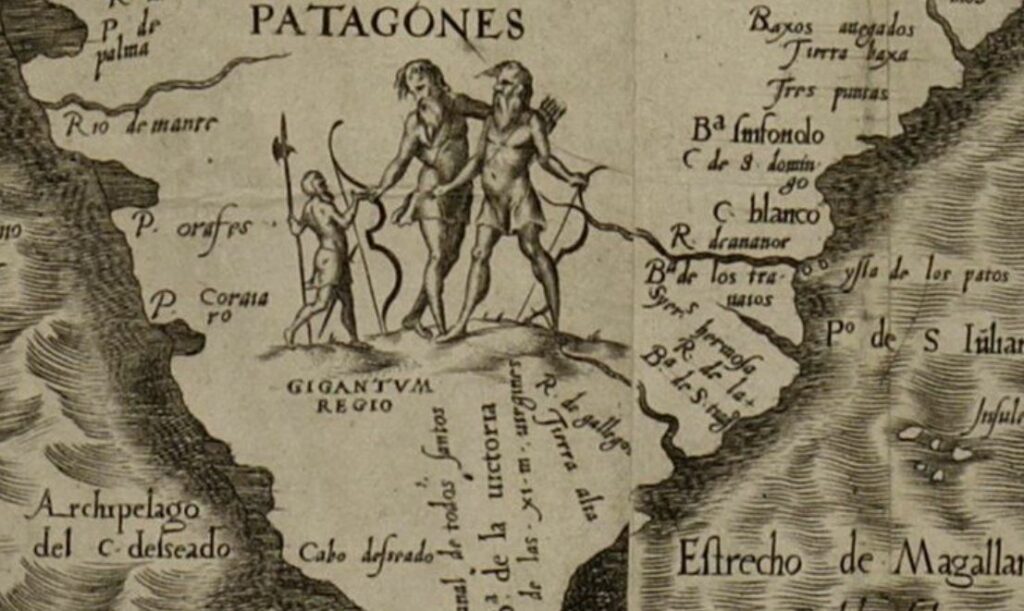 “Leaving that place, we finally reached 49 and one-half degrees toward the Antarctic Pole. As it was winter, the ships entered a safe port to winter. We passed two months in that place without seeing anyone.One day we suddenly saw a naked man of giant stature on the shore of the port, dancing, singing, and throwing dust on his head. The captain-general sent one of our men to the giant so that he might perform the same actions as a sign of peace. Having done that, the man led the giant to an islet into the presence of the captain-general. When the giant was in the captain-general’s and our presence, he marveled greatly and made signs with one finger raised upward, believing that we had come from the sky.”

He was so tall that we reached only to his waist, and he was well proportioned. His face was large and painted red all over, while about his eyes he was painted yellow; and he had two hearts painted on the middle of his cheeks. His scanty hair was painted white.

He was dressed in the skins of animals skillfully sewn together. That animal has a head and ears as large as those of a mule, a neck and body like those of a camel, the legs of a deer, and the tail of a horse, like which it neighs, and that land has very many of them.

His feet were shod with the same kind of skins which covered his feet in the manner of shoes. In his hand he carried a short, heavy bow, with a cord somewhat thicker than those of the lute, and made from the intestines of the same animal, and a bundle of rather short cane arrows feathered like ours, and with points of white and black flint stones in the manner of Turkish arrows, instead of iron. Those points were fashioned by means of another stone.”—(Diary of Pigafetta, pp. 51-52).

Land of Mermaids and… flying saucers?

In addition of depicting Giants dragons and cannibals, the lower left corner of the map, near “Tierra del Fuego,” an archipelago off the southernmost tip of the South American mainland, across the Strait of Magellan, illustrates what seems to be a mermaid holding an object that eerily resembles a flying saucer.

The mermaid which faces a ship traveling towards the coast of modern-day Chile holds in her right hand an object that strangely resembles a disc-shaped object, with a clear dome protruding from the middle.

It looks like what many people today would say a UFO, aka flying saucer, would look like.

But is all as seems? Is really a flying saucer?

Just above said mermaid, and to the right of the ship depicted traveling towards Tierra del Fuego we see another mermaid facing the ship and holding in her left hand an oval-shaped object. This object may be a mirror, as the mermaid is depicted touching her hair while looking at what most likely is a mirror.

Does this mean that the mermaid holding the alleged flying saucer is doing the same?

While usually, mirrors don’t look like that—resembling a flying saucer—it’s quite possible she is holding an object that was either abstractly illustrated as a mirror or is some sort of object which would fall into that category. The uncanny resemblance to a flying saucer is most likely just that, a resemblance that people like me, in the 21st century make when seen such elements incorporated into charts created hundreds of years ago.

As we have noted before, the creators of the ancient map decided to incorporate a mixture of real places and objects with mythological elements such as Giants, Mermaids, Dragons, and hungry sea serpents.

Whatever the object held by the mermaid is, remains a mystery, however, it is really interesting to see elements like that in an ancient map of the American Continent, as it clearly shows what people imagined America like more than 500 years ago.

What do you think the object the mermaid is holding really is? Do you agree it’s a weirdly shaped mirror?