There are numerous images taken on Mars which depict what appear to be buried artificial structures on the Surface of Mars.

Carl Sagan noted so succinctly in “Cosmos“: “The first indication of intelligent life on Earth lies in the geometric regularity of its constructions…”

Whether or not Mars could have supported life in the distant past is a question that could soon be answered. The truth is that our views on Mars have drastically changed over the past couple of decades.

Today we are certain that Mars was a very similar planet to Earth in the distant past when the red planet had an atmosphere eerily similar to that of Earth with oceans and rivers that once covered the Martian surface creating a ‘perfect’ environment for life as we know it to flourish.

But what about intelligent life? Well, researchers have concluded over the past couple of years that Mars is probably the most similar planet to Earth in our solar system. Located just on the border of the ‘habitable zone’ of our star, it is very likely that Mars had just enough time and the perfect conditions to support life and allow it to develop to a ‘sophisticated’ stage.

Interestingly, a recent study has even concluded that in the distant past Mars’ shallow lakes may have once sustained life. Basins covered in lava and water could have sustained the necessary conditions for microbes to survive. The study performed by scientists from the Planetary Science Institute in Tuscon, Arizona suggest that basins on Mars could have been covered with lava and water over the course of hundreds of millions of years. This ideal mixture created ideal temperature ranges, water pressure and nutrients and life as we know it could have made it on Mars. The new study claims that gigantic lakes could have formed within these lava-filled basins.

Moreover, previous studies have identified several anomalies on the red planet. For example, NASA’s Curiosity Rover has registered traces of methane on the Red Planet. Curiosity registered surges of methane gas levels using the SAM instrument. These show that the base values are lower than thought, just 0.7 parts per billion in volume (ppmv), but data has also shown that the values increased significantly six times and on some occasions even exceeding seven ppmv, 10 times higher. This indicates that there is an additional source of methane of unknown origin. Interestingly, on Earth, 90% of all methane in the atmosphere is produced by living organisms. In addition to traces of methane, the rover’s instruments also detected biologically useful nitrogen. This discovery is of great significance to the team of scientists at NASA since it adds further evidence to the theories that ancient Mars was habitable for life as we know it. We know that Nitrogen is essential for all known forms of life on Earth. This is because it is used in the building blocks of larger molecules like DNA and RNA, which encode the genetic instructions for life.

All of the above leads us towards peculiar images taken from Mars, which apparently shows buried structures on the surface of the red planet. Whether or not these structures are artificial is up for debate, but they certainly give us a lot to think about.

One of the most interesting images which, according to many, depict ‘traces’ of Martian cities were taken by the Mars Orbiter Camera. In the South Polar Layered Terrain there are structures which are identified by NASA as ‘Inca City.’

According to NASA’s website, This set of rectilinear, intersecting ridges was first seen in images taken by Mariner 9 in 1972. The superficial resemblance to ancient ruins led to their informal name, “Inca City”. As 1997 turned to 1998, MOC obtained this stunning high-resolution view during the 79th orbit of Mars Global Surveyor. The subframe depicted here is centered on 81.54°S latitude, 64.28°W longitude.

The enigmatic images of Mars show what many believe is the ultimate evidence of artificial structures buried in the Martian soil. Due to their peculiar design which might appear artificial in nature many UFO researchers have suggested that images like the above mentioned could be the ultimate proof that an ancient Martian Civilization once developed on the Red Planet.

This idea has been supported by numerous researchers including them Dr. Brandenburg, who is a plasma physicist at Orbital Technologies in Madison Wisconsin.

According to Dr. Brandenburg, there is enough evidence to prove that at least two major nuclear blasts went off on the surface of the red planet in the distant past. The theory proposed by Dr. Brandenburg is based on the traces of uranium and thorium that have been registered on the surface of Mars. This Martian civilization was wiped out by another hostile alien race from elsewhere in the universe. According to Dr. Brandenburg, ancient Martians known as Cydonians and Utopians were massacred in the giant nuclear attack – and evidence of the genocide can still be seen today.

In addition to the images above from the South Polar Layered Terrain, there are other images that have created great interest among the general population.

But how can we differentiate artificial structures and natural geological features? Well, the rules are, in fact, simple say many researchers: Look for geometry … repeating lines, rectangular shapes, and other features arranged in straight lines. This “Euclidian geometry,” above a certain scale, on any planet, could be the major essential fool-proof signature of intelligent design. (Source)

There are numerous images which point towards locations on Mars that show intelligently designed structures that are now half buried on the red planet and some of them can be found at an ancient river channel called  “Ogygis Rupes.”

The images taken by the Mars Global Surveyor is considered by many as another obvious sand-covered artificial ruin on the surface of the red planet found at the following coordinates:  located at 28.38° N., 332.54° W., in a region called (appropriately) “Arabia Terra“.

However, more structures are identifiable thanks to Soviet images of the red planet. The best examples were taken by the soviet probe Phobos 2 which sent back a number of peculiar images before it was ‘mysteriously’ lost after being just 90 days in orbit around Mars.

In 2002 NASA’s Mars Odyssey Mission captured the first first nighttime IR “test” images of the red planet revealing what many refer to as ‘A Buried Maritan City.’ The data beamed back by the Odyssey mission apparently reveals yet another set of incredible geometric structures on the surface of Mars, a region located beside the Soviet Phobos 2 images — in “Hydaspsis Chaos” (2° North/ 29° West). 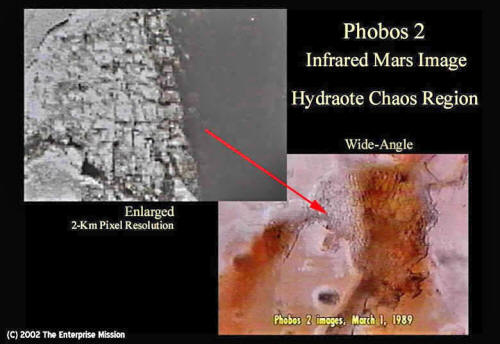 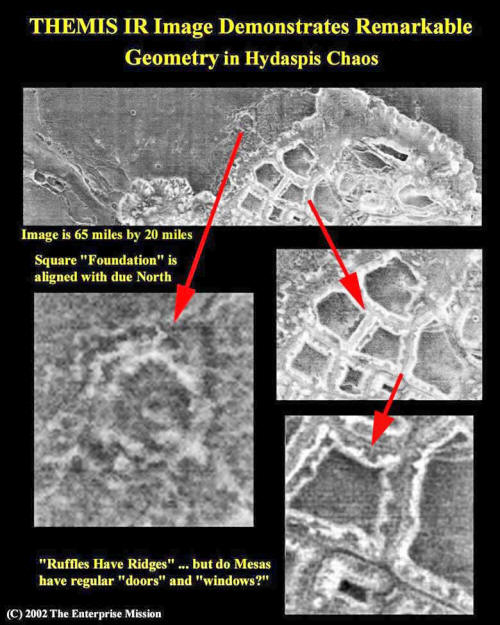 However, while most of these structures are considered as mere typical “Martian mesas” by NASA, the undeniable evidence is there according to ufologists. There are numerous redundant geometric shapes on Mars that indicate a carefully designed architectural layout, arguing that in the distant past the red planet must have been inhabited by intelligent lifeforms. 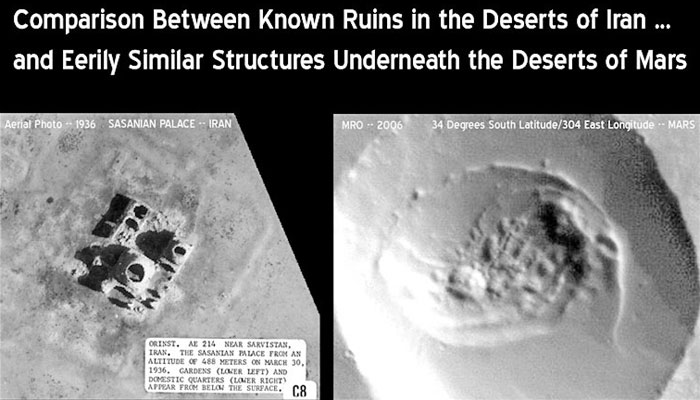 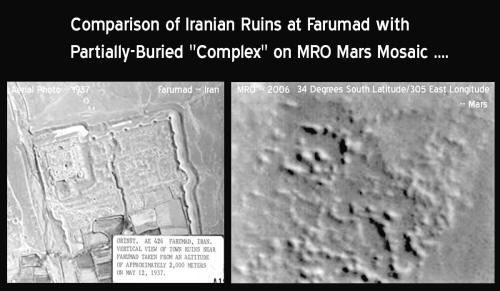 However, not only was NASA looking to snap images of Mars, the Soviets had their missions too and in 1999 after the old Soviet Union had collapsed, lead Russian designer of unmanned spacecraft bound for Mars and Venus (including Phobos 2) — V.G. Perminov  translated a very personal (if all-too-brief) memoir of the Soviet’s many attempts to send “his” spacecraft to the Red Planet … titled: “The Difficult Road to Mars: A Brief History of Mars Exploration in the Soviet Union” (source)

“… The first stage of Mars exploration is finished. Surprisingly, vegetation, canals, and traces of intelligent life have not been found. However, dried-up courses of waterways have been observed. What happened? Why did water disappear? Did primitive or intelligent life exist in the past, or does it exist now on Mars?

“Today, we cannot answer these questions. It now seems like Mars is a lifeless desert. On the other hand, we know that in Earth’s deserts archeologists dig up cities that flourished in the past, but were neglected by ancient people and they are now covered with sand.

“In 1971, the largest dust storm ever registered by astronomers covered the whole Martian surface. For a few months hundreds of millions of tons of dust were suspended in the Martian atmosphere. As a result, one could not observe the Martian surface. Nevertheless, one cannot rule out that cities covered by sand may exist in the Martian deserts. That would be evidence of an ancient Martian civilization that disappeared or moved to other planets [emphasis added] …”

Whether or not the above images are in fact the ultimate evidence of long lost intelligent civilization on Mars is up for debate. However, in the last couple of years the possibility that life –intelligent life specifically—developed on Mars has never been as strong as it is today and countless images beamed back from NASA’s orbiters and rovers support the ‘controversial idea’ that the red planet was in fact inhabited by intelligent Alien Civilizations in the distant past.