A group of American paleontologists discovered a set of carved tools at an archaeological site belonging to the Pliocene, more than 3.3 million years ago.

“Approximately 3.3 million years ago someone began chipping away at a rock by the side of a river. Eventually, this chipping formed the rock into a tool used, perhaps, to prepare meat or crack nuts. And this technological feat occurred before humans even showed up on the evolutionary scene.”

Since early hominids, Homo habilis, appeared hundreds of years later, the discovery is a disturbing enigma: and researchers ask who made these tools?

The discovery took place at the archaeological site of Lomekwi 3, Kenya and according to researchers, it could revolutionize archeology and force history to be rewritten. 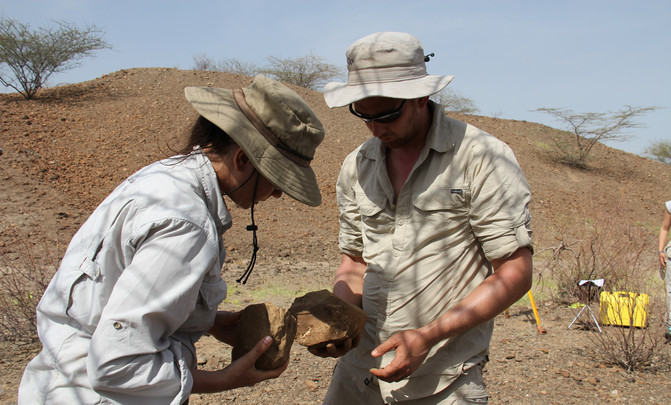 This discovery was added to a list of other mysterious discoveries that according to
mainstream archaeology is not possible.

Among the nearly 150 tools found at the archaeological site are hammers, anvils and carved stones that could have been used millions of years ago to open and crack nuts or tubers, and carve the trunks of fallen trees to get insects for food.

According to an article from Nature.com, the Lomekwi 3 knappers, with a developing understanding of stone’s fracture properties, combined core reduction with battering activities.

Given the implications of the Lomekwi 3 assemblage for models aiming to converge environmental change, hominin evolution, and technological origins, we propose for it the name ‘Lomekwian’, which predates the Oldowan by 700,000 years and marks a new beginning to the known archaeological record.

“These tools shed light on an unexpected and previously unknown period of hominin behavior and can tell us a lot about cognitive development in our ancestors that we can’t understand from fossils alone. Our finding disproves the long-standing assumption that Homo habilis was the first tool-maker,” said Dr. Harmand, lead author of a paper published in Nature.

“Conventional wisdom in human evolutionary studies since has supposed that the origins of knapping stone tools were linked to the emergence of the genus Homo, and this technological development was tied to climate change and the spread of savannah grasslands,” said co-author Dr. Jason Lewis of Stony Brook University.

“The premise was that our lineage alone took the cognitive leap of hitting stones together to strike off sharp flakes and that this was the foundation of our evolutionary success.”

Until now, the oldest stone tools associated with Homo had been dated at 2.6 million years coming from the Ethiopian deposits which were found close to the fossil remains of the first representative of the Homo habilis, named for their unique ability to use their hands to produce tools.

This “first” human industry is called Oldowan. The Oldowan is the archaeological term used to refer to the earliest stone tool archaeological industry in prehistory. Oldowan tools were used during the Lower Paleolithic period, 2.6 million years ago up until 1.7 million years ago, by ancient hominids across much of Africa, South Asia, the Middle East and Europe. This technological industry was followed by the more sophisticated Acheulean industry.

One of the main questions raised by the discovery of these stone tools is its authorship. For a long time, anthropologists have thought that our relatives from the Homo genus, a line that leads directly to the Homo sapiens, were the first to develop such tools. But in this case, the researchers do not know who made these extremely old tools which according to mainstream archaeology should not exist.