Archaeologists discover ancient ‘Cheerios’ in Austria dating back to 1000...

Are Cheerios just a clever copy of an ancient cereal made by our ancestors? It certainly seems that way thanks to a recent discovery of Cheerios-sized rings made of wheat and barley at a dig in Austria.

Stillfried an der March is a late Bronze Age site that served as a grain storage center around 900-1000 BCE. And that’s where Andreas G. Heiss of the Austrian Archaeological Institute and his team found little rings made of dough in a pit where a fire burned down an ancient home during that time period.

Several of the “Cheerios” were found by researchers. Some looked exactly like the rings found in a box of cereal today, however, those were made of clay while the organic ones were charred.

According to a report published in PLOS:

Three incomplete ring-shaped charred organic objects, found together with 14 rings and ring fragments made of clay were discovered in a secondary filled silo pit, excavated among a total of about 100 pits of this kind at the site.

The charred rings were “made of dough from rather finely ground wheat and barley meal which was most likely air-dried or baked at low temperature prior to charring,” the team concluded after analysis.

The clay rings are loom weights, which are used for weaving by keeping yarn taut as it is weaved into clothing and other fabrics by a warp-weighted loom. 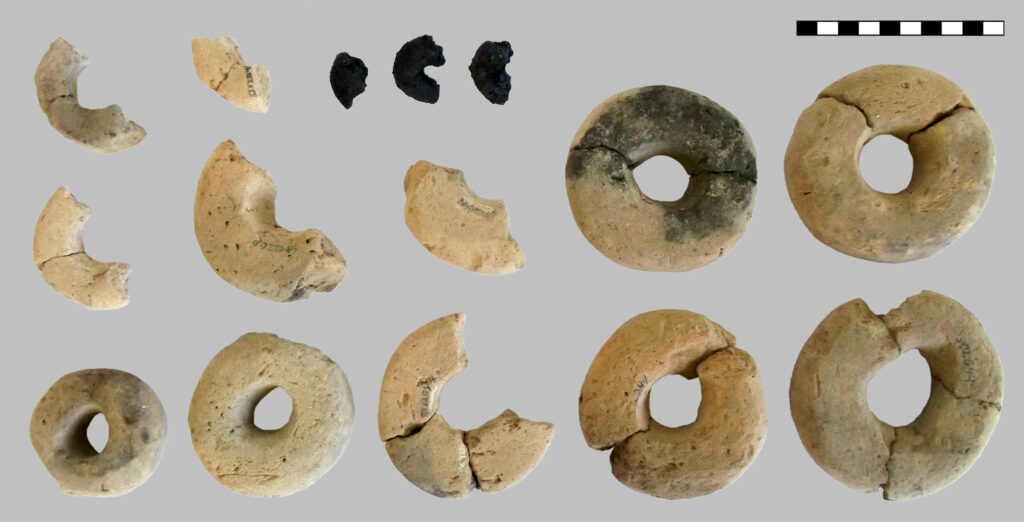 While a lot of people share a misconception that prehistoric bakers may not have been creative, several finds beyond these rings prove otherwise.

Ancient peoples apparently had more food choices than we think they did.

The team concluded that the shape of the organic rings is clearly intentional and that they may not have been for eating, perhaps holding more of a ceremonial or symbolic value.

In comparison to the other cereal preparations from Stillfried an der March which have already been published, the three annular objects…differ in both their shape and the production processes involved. Their finely ground flour and intentional shaping certainly indicate that more time was invested in their production than necessary for subsistence. The rings may therefore have been of higher value than the other cereal preparations described from Stillfried.

The overall “odd” assemblage in the secondary filling…may or may not be a valid argument against the dough rings representing everyday food. In the authors’ opinion, the strongest point lies in the context of clay rings and dough rings deposited together which seems highly unlikely to have happened by sheer chance. Like similar finds from synchronous sites in the region, the clay rings are interpreted as loom weights [47, 163], and they bear actual traces of use.

Any practical use for the dough rings found in context with them is hard to imagine. We therefore suggest the hypothesis that the dough rings were created on purpose as imitations of the clay loom weights of the same shape and probably were not produced for consumption in the first place. The exact purpose of the Stillfried cereal rings remains unknown, as well as the time of their charring–during the catastrophic fire which destroyed the house, or within the course of the ritualised filling of the pit.

But who knows, the rings could very well have been for consumption. It’s just that most of them were eaten, which would destroy the shape and the evidence.

The ancient people who lived at this site could have had their own form of Cheerios that has been copied ever since, especially in modern times.

It’s yet another discovery that connects us more with our ancestors.

At a cave site in Israel, researchers found that ancient peoples engaged in recycling on a daily basis, turning broken flint tools into smaller flint tools that were used for specific specially skilled tasks, therefore not wasting perfectly good resources at hand.

And an archaeologist in Colorado literally brews ancient beers from several different cultures around the world to connect people to the past and keep history alive.

So, even if these dough rings were not made for consumption, it’s nice to think that they may have been because it allows us to better relate to the people of that time. They may not have poured themselves a bowl of Cheerios and poured milk on it, but the fact that they were creative enough to shape dough into little rings that resemble the popular breakfast cereal gives us yet another connection to the past that can help us understand our lives today.