Archaeologists Find a Buried Criosphinx Dating Back 3,350 Years in...

Researchers excavating the archaeological site of Gebel el Silsila in Egypt have come across the 3,000–year-old remains of an ancient Egyptian carving shop, home to a number of unfinished sculptures, including that of a ram-headed stone. 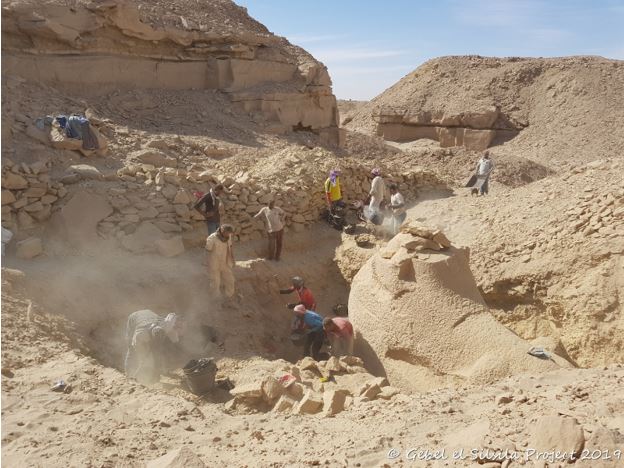 Archaeologists have revealed that the ancient workshop most likely dates back to the 18th Egyptian Dynasty, when Pharaoh Amenhotep III, the father of Akhenaten ruled over Egypt.

The discovery of the Sphinx Workshop was revealed by a Swedish-Egyptian archaeological mission who also discovered hundreds of hieroglyphic fragments at Gebel el Silsila, as well as a small ‘practice piece carving’ of a sphinx that experts believe, may have been carved by an apprentice in ancient times.

The discovery was revealed by archaeologists in a blog post.

The archaeological team, led by experts from Lund University and the Egyptian Ministry of Antiquities have revealed that the head of the recently found sphinx–a criosphinx–was visible before excavation on the quarry began.

But only now has the entire body of the Sphinx been brought to the surface, revealing a sculpture that measures around five meters in height and three-and-a-half meters in length.

According to reports, the top half of the ram-headed Sphinx is broken and seems to have been lost in time.

Archeologists say that the Criosphinx was “carved in a style comparable with the criosphinxes to the south of Khonsu Temple at Karnak. The archaeological context suggests a date from Amenhotep III of the 18th Dynasty.”

Both the criosphinx and the one that was most likely carved by the apprentice were preserved in a rough-cut and prepared for transportation.

However, experts note that both sculptures were abandoned at the site as the larger Sphinx fractured.

Among the discoveries, the archaeologists also reported finding a rough-cut sculpture of a coiled cobra, carved to crown the head of the main Sphinx.

Experts further note that they discovered a treasure trove of hieroglyphic fragments at the site which most likely belonged to a since-destroyed shrine belonging to Amenhotep III.

Reports further indicate researchers unearthed the remains of a falcon sculpture as well as a quarry text, carved at the site when the quarry first opened, some 3,350 years ago.

The team is now working in documenting all discoveries and translating the hieroglyphic texts, penned down in red ochre.

Further excavations are planned on the site, where archeologists will make digital recordings of the site.