Archaeologists have found hundreds of items that ancient civilizations around the world used thousands of years ago. One of those incredible inventions is the 1200-year-old telephone of the ancient Chimu civilization. The incredible device was found in the ruins of Chan Chan in Peru. The device is the earliest and best example of a “technology” in the region.

Chan Chan is perhaps the largest pre-Columbian city in South America that most of us never heard of.

The Chimu State or also called the Kingdom of Chimor was an Andean civilization established in Peru around 850 AD. It was one of the cultures conquered by the Inca in 1470.

Its capital, Chan Chan, was the largest pre-Columbian city in South America. Located today in the region of La Libertad approximately five kilometers west of Trujillo. This ancient city covers a staggering twenty square kilometers with a dense urban center of six square kilometers. It was the imperial capital called home for over fifty thousand people. 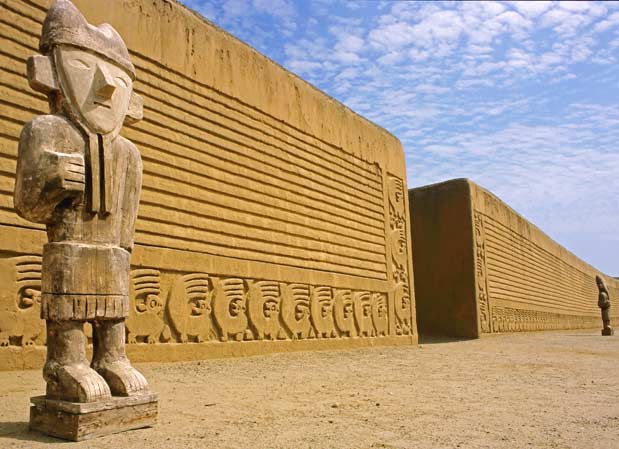 The Chimu empire was well-known for their extremely well-planned cities, having large, flat-topped buildings for the nobility and incredibly well-decorated adobe pyramids that served as temples. their temples were decorated with golden items that were fabricated by their extremely talented goldsmiths, who were even recognized by the Incas.

The 1200-year-old telephone is an excellent example of the “lost technologies” of our ancestors, who according to mainstream researchers were not capable of such technological feats.

According to an interview for the Smithsonian, Ramiro Matos from the National Museum of the American Indian said: “This is unique. Only one was ever discovered. It comes from the consciousness of an indigenous society with no written language.”

The Chan Chan telephone resembles a “lover’s phone” which has been known to society for hundreds of years, very popular in the nineteenth century. However, the Chimu telephone is composed out of two gourd tops bound with a length of cord.

The Ancient Chimu culture was able to create an enigmatic device that allows them to communicate fro distances, over 1000 years ago. The gourds that composed the device, around 9 centimeters long, were coated in resin and acted as transmitters and receivers of sound. the device has a line of over 20 meters long connecting the two ends.

The Chimu telephone is a unique and incredible device that predates the earliest “ideas” of telephones by more than a thousand years. Researchers are certain that this is one of the best examples of ancient man’s ingenuity, even though they know the exact purpose of the device, experts are still wondering how the ancient Chimu used the 1200-year-old phone and for what exact purpose.

Among the ancient Chimu, this device would have been an extremely valuable possession worthy of their nobles.

The precious telephone, with the seemingly magical ability to channel voices across space to be heard directly in the ear of the receiver was, “a tool designed for an executive level of communication” said Matos.

Matos, an anthropologist, and archaeologist specializing in the study of the central Andes explained, “The Chimu were a skillful, inventive people,” who possessed an impressive engineering society. This can be shown by their hydraulic canal-irrigation systems and their highly detailed, elaborate metalwork and artifacts.

The 1200-year-old telephone proves that we have very little knowledge of our ancestors. It also proves to mainstream science that early civilizations were much more skilled and advanced than what we credit them today.

(Reference: There’s a 1,200-year-old Phone in the Smithsonian Collections)

(Reference: the 1,200-year-old telephone, an amazing invention of the ancient Chimu civilization)