Are These Mysterious Ancient Maya Artifacts Evidence Of Ancient Alien...

Thousands of years ago, the ancient Maya developed into one of the most influential ancient civilizations in Mesoamerica.

Occupying a territory from Mexico to El Salvador, the powerful Maya became one of the dominant forces in the region, creating massive cities, trading routes, and breathtaking temples and pyramids.

The Maya stood out in the American Continent due to their hieroglyphic writing, one of the few fully developed writing systems of the pre-Columbian American continent, as well as for its art, architecture, and systems of mathematics, astronomy, and ecology. They were one of the most developed ancient cultures in America.

The Ancient Maya developed in the region that encompasses the southeast of Mexico, corresponding to the states of Yucatan, Campeche, Tabasco, Quintana Roo and the eastern part of Chiapas, as well as in most of Guatemala, Belize, the western part of Honduras and El Salvador.

This region is composed of the northern lowlands that encompass the Yucatan peninsula, the highlands of the Sierra Madre that extends through the Mexican state of Chiapas, southern Guatemala to El Salvador, and the southern lowlands in the south.

The Mayan masonry architecture is evidence of the existence of artisan specialization in Mayan society, as well as a centralized organization and political means to mobilize a large workforce.

Long story short? The Maya were a civilization unlike any other in America.

And because of their extreme level of advancement, many researchers and ancient astronaut theorists have pondered whether it is possible that the ancient Maya obtained their advanced knowledge in engineering, astronomy, and mathematics from an otherworldly influence? 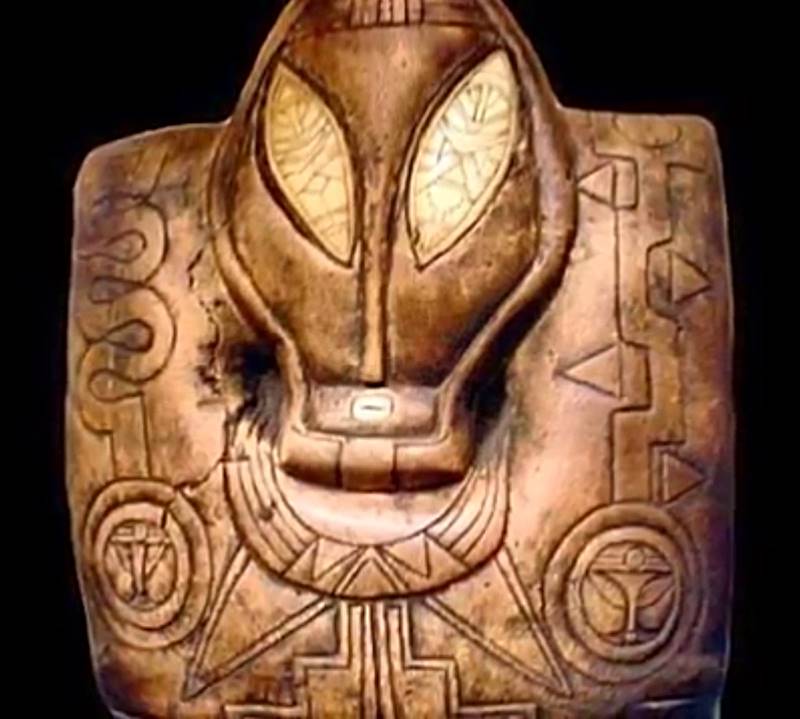 Over the years, numerous alleged artifacts said to have belonged to the ancient Maya civilization have been excavated in Central America.

More than six years ago, a stunning set of images made the news after a number of researchers claimed to have rediscovered long-lost ancient Maya artifacts depicting what appear to be spaceships, alien figurines, and star-maps.

Because of the nature of the claims, these artifacts were quickly labeled as a hoax, and the fuss behind the discovery vanished into history as one of the many hoaxed objects found around the globe.

Different artifacts have been discovered throughout the years. The first set of artifact (see below) were allegedly discovered in Calakmul, Mexico.

The site is located in the central/southern portion of the Yucatán Peninsula, in southern Mexico and includes the remains of the important Maya city Calakmul, set deep in the tropical forest of the Tierras Bajas.

Here are the alleged items that were supposedly carved by the ancient Maya, and are evidence of ancient alien contact: 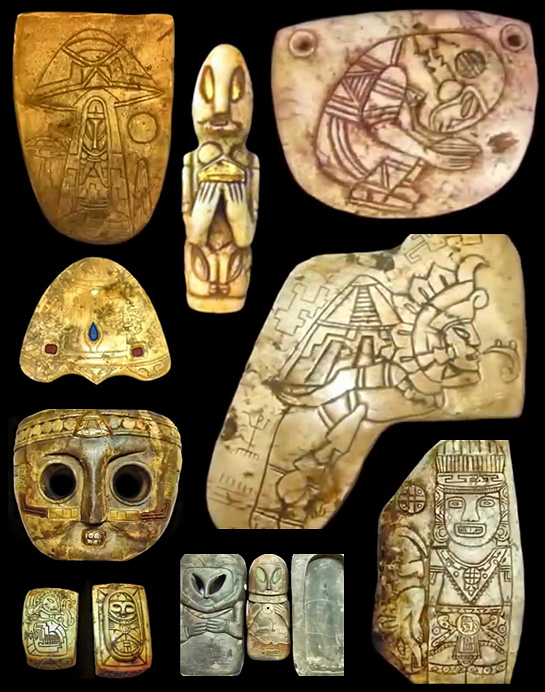 The above artifacts, allegedly made by the ancient Maya have been heavily criticized by experts who maintain they are an elaborate hoax.

The first article I read when I started looking for information about these strange articles was this one from the Guardian. There is a lot of stuff that seems out of place here. The biggest mistake in the article is that they mention president “Álvaro Colom” and speak about him being Mexico’s president which is a mistake, he, in fact, is a Guatemalan politician who was the President of Guatemala from 2008 to 2012.

From there everything went downhill and the little belief I actually had was gone (you really cannot make a mistake like that, can you?).

The article also seems to mention several statements of high ranking officials from Mexico and Guatemala that discussed these artifacts, yet I have not been able to find transcripts or anything like that online.

I did, in fact, find the images of these artifacts and I must admit they seem impressive. From what I have read about the subject, there is little to none credible information, and the archaeological discovery itself is questionable.

But the above artifacts are not the only ones that have been found so far.

In fact, numerous other similar objects have been discovered throughout the years.

Here are a few:

Countless images of mysterious figurines are available across social networks.