Astronomers spot ‘The Eye of Horus’ in outer Space

The Eye of Horus was spotted ins space. Researchers have found that something very strange seems to surround THIS system of galaxies. 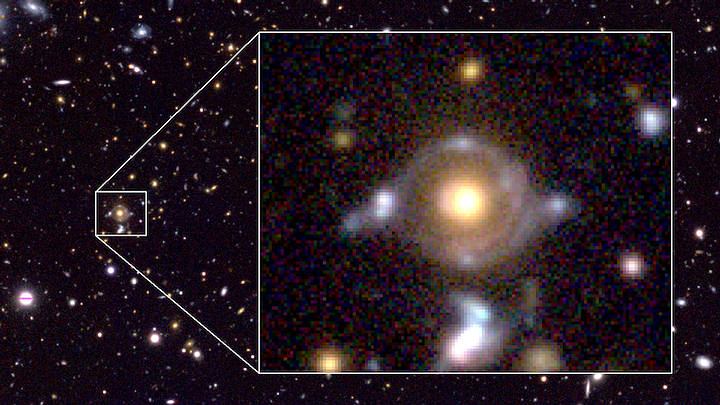 A system of galaxies recently discovered seems to be hiding something very unusual inside the strange swirls that surround it.

The three galaxies discovered by researchers are  7, 9 and 10.5 billion light-years away.

It has been called the Eye of Horus due to the incredible similarity of the ancient Egyptian symbol.

This ‘ancient eye’ in the sky will help researchers take a spatiotemporal peek to more distant galaxies that will allow them to understand the history of the universe better.

The new system of galaxies was discovered by the National Astronomical Observatory of Japan (NAOJ) while carrying out a survey of deep space by the Subaru Telescope.

A group of students and young astronomers analyzed some of the data collected by the telescope and found a unique gravitational lens system.

The galaxy in the center of the image is accompanied by others that seem to bend around them, creating the unusual figure of an eye.

This happens because the light from a distant galaxy can be bent by the gravitational influence of a foreground galaxy. Due to the immense gravity, massive cosmic bodies are able to bend spacetime around them which ultimately causes the path of light to be deflected.

According to researchers, when galaxies align, this effect can alter the way objects in space look from Earth.

This is how a cosmic ‘magnifying glass’ is formed which when combined with the power of space telescopes such as Hubble allows us to observe deep space and entire clusters of galaxies.

However, this phenomenon also occurs in simpler galaxies. When a galaxy has a strong gravitational pull, it can bend space-time around it.

During the annual session scholars fro the Subaru Telescope organize for school, a team of astronomers and students looked at data from an ongoing survey of space which used an instrument called the Hyper Suprime-Cam (HSC). During the session, astronomers spotted the strange looking eye.

“When I was looking at HSC images with the students, we came across a ring-like galaxy, and we immediately recognized it as a strong-lensing signature,” said Masayuki Tanaka, the lead author of a science paper on the system’s discovery.

“The discovery would not have been possible without the extensive survey data to find such a rare object, as well as the deep, high-quality images to detect light from distant objects.”

“It was my first time to look at the astronomical images taken with Hyper Suprime-Cam, and I had no idea what the ring-like galaxy is,’ said Arsha Dezuka, a student who was working on the data. ‘It was a great surprise for me to learn that it is such a rare, unique system!”

According to experts, two distinct rings of light with different colors are clearly seen in the images obtained.

This means that two different background galaxies are ‘lensed’ by the galaxy located in the foreground, suggest researchers.

“The spectroscopic data reveal some absorbing things about the background sources,” said Kenneth Wong from NAOJ, the second author of paper.

“Not only do they confirm that there are two sources at different distances from us, but the most distant source seems to consist of two distinct clumps, which could indicate an interacting pair of galaxies. Also, one of the multiple images of that source is itself being split into two images, which could be due to a satellite galaxy that is too faint for us to see.”