This fascinating image was taken during the NASA Space Shuttle Program in 1986. Pictured here is a mysterious triangle shaped object floating between the space shuttle and our planet. 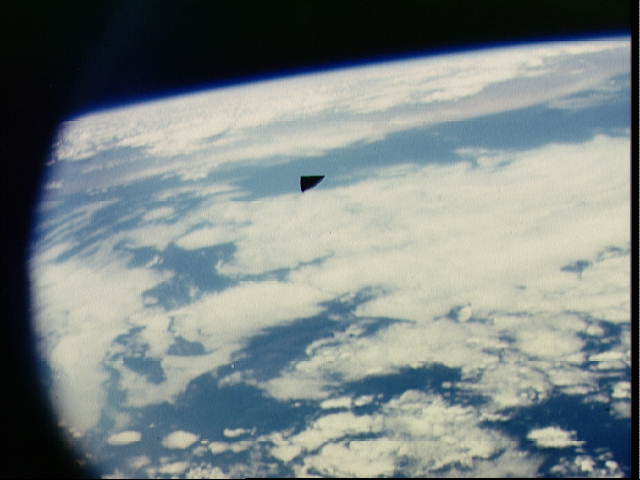 The Triangular-shaped UFO –as it has been called by many these days—was photographed on January 12, 1986, during the STS-61-C, the seventh mission of the Columbia Space Shuttle.

According to official reports, the triangular shaped object IS NOT an Unidentified Flying Object but a piece of THERMAL INSULATION TILE floating randomly in space.

However, most UFO researchers firmly disagree that the image we see here is part of a THERMAL INSULATION TILE. The reason why they doubt it to be a thermal insulator tile is that of the fact that in the last couple of decades, there have been significant reports of strange triangle-shaped UFOs all round the planet.

The image came from The Gateway to Astronaut Photography of Earth a website operated by NASA at the Earth Sciences and Image Analysis department at Lyndon B. Johnson Space Center. These are the people responsible for teaching astronauts in Earth observations and take care, catalogue and ‘edit’ images that astronauts take in space (or used to).

“Decades ago, visitors from other planets warned us about where we were headed and offered to help.  But instead, we, or at least some of us, interpreted their visits as a threat, and decided to shoot first and ask questions after.” – Paul Hellyer, Former Canadian Defense Minister (source)

Is it possible that these mysterious triangle-shaped UFOs are in fact vehicles of these ‘visitors’?

The image was only available for a short period of time on the following link:

Now, the image is nowhere to be found and has seemingly ‘disappeared’ from their official website.However another example of the image can be now found if you go over to NASA web Archive: eol.jsc.nasa.goc.

However, the same image of the strange craft can be seen in other NASA Photos Database Records.

Many people have drawn similarities between the mysterious triangle-shaped object snapped by Space Shuttle Astronauts in 86 and the Black Knight Satellite which has allegedly been orbiting our planet for over fifty years.

Even today, there are differents stories explaining both the Black Knight Satellite and the Triangular UFO seen in the above image. However, different people have different points of views. For some, this image is the ultimate proof there are highly advanced vehicles —and some of them might not be man-mande— travelling to and out of our planet. Others believe there is no way that images like this one can be considered as proof of otherworldly visitations on Earth.

But what many people will probably agree on is the fact that in recent years, an increasingly large number of sightings have been reported all around the globe. In addition to the numerous sightings, a large number of government officials, astronauts, and scientists have spoken out about the possibility—and existence— of alien life and the UFO Phenomenon.

And remember one of the famous quotes of Edgar Mitchell, the 6th man to walk on the moon:

“Yes there have been crashed craft, and bodies recovered . . . We are not alone in the universe; they have been coming here for a long time. . . . I happen to be privileged enough to be in on the fact that we have been visited on this planet, and the UFO phenomenon is real.”  (source)(source)

Historian and UFO researcher Richard Dolan does a pretty good Job resuming the UFO Cover-up in around 10 minutes: