Scientists Find the Remains of the Largest Bear on Earth—It...

Researchers say that they recently discovered fossils that belong to a specimen of the species of Arctotherium Angustidens, considered the most gigantic bear that ever existed. Their closest known relative is the spectacled bear (Tremarctos ornatus).

The researchers say that the recently excavated skeletal remains are incredibly well-preserved.

The remnants of the gigantic bear were found in San Pedro, Argentina, excavated at a depth of around nine meters. 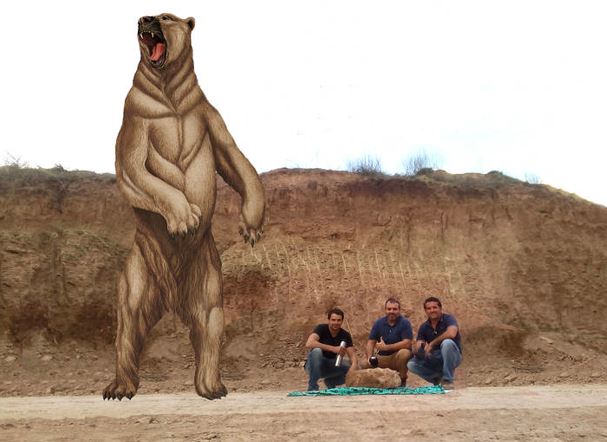 Dr. Leopoldo Soibelzon, a researcher at the Museum of La Plata and CONICET, told the news Agency CTyS-UNLaM that “it is a large bear of the species Arctotherium Angustidens, whose largest specimens, in an upright position, could reach up to 4.5 meters in height.”

Dr. Soibelzon discovered in 2011 what was then considered the largest bear on Earth.

However, the new fossils are twice as big as those discovered in 2011.

The newly excavated gigantic bear was identified as a young male that weighed approximately 800 kilos and measured approximately 2.5 meters in height, standing on its two legs.

Researchers explained that “the skull and jaw of this new specimen are incredibly preserved, while part of his pelvis, the fragment of one of its humerus, and six articulated vertebrae have all been recovered.”

The director of the Museum of San Pedro, José Luis Aguilar, who made the discovery together with Matías Swistun and Julio Simonini, agreed that “the state of preservation of the skull is impressive, we discovered its jaw and nearly all of the animal’s teeth, which makes it an exceptional example.”

“The skull of this ancient beast is really amazing in terms of size and state of conservation,” Aguilar added.

It has fangs about 6 centimeters long, which are strong, compact, pointed and were prepared to tear the flesh of its prey.”

“The jaw also retains a pair of tusks, which are 4.5 centimeters long. The molars of this bear were well adapted to cut and to destroy the muscle tissue and bones of the animals on which they fed,” Aguilar added.

Aguilar explained that the discovery would not have been possible without the collaboration of machinist Fausto Capre of the company Tosquera San Pedro SA, owner of this site.

The gigantic bear roamed the Argentinian lands more than 700,000 years ago.

The skeletal remains were found at a depth of around nine meters, where scientists also discovered evidence of an ancient Marsh.

Aguilar explained that “some of the larger animals that hunted or came to drink water, were trapped in the mud of the marsh. And that’s why we have been making various discoveries in that region for a while now.”