Chauvet, the dream unlocked: A look inside mystery cave art

Around 35,000 years ago in Southern France, people were spending a lot of time in a cave where they created some of the most astonishing ancient art currently known.  The art they created has left many people in awe as to the skill and detail of the images that have been left behind.

Sealed off by a landslide, roughly 20,000 years ago, the cave lay entombed, preserved and waiting. Waiting for that moment when someone would stumble across an entrance to the wonders that lay within.  Then, on December the 18th 1994, a group of men did exactly that. They found a way in.

The team consisted of Eliette Brunel-Deschamps, Christian Hillaire, and Jean-Marie Chauvet. They discovered not just the art, but prints, markings and fossilised remains from a variety of animals that had either wandered in and never left or had been brought in. Some of these animals are now extinct.

The art has made so much of an impact that a replica was built in order to allow people to see the art for themselves. The original cave is now sealed off and has become a UNESCO site. Very few people are allowed in and studies are constantly being carried out.

In 2010, Werner Herzog was allowed to enter the cave and shoot his 3D film, Chauvet, the cave of forgotten dreams.  In this film, Werner attempts to produce similar lighting effects as the creators of the art may have worked by. The camera work was designed to move around the art so that you were given the feeling of being there and slowly walking past and seeing the art as it would have been seen.

The differing light levels and the movement of the camera may have had a far greater impact than was previously imagined.

On the 21st December 2012, Steve Meads sat down to watch the film and what he believes he saw hidden in the art was soon to be turned into his first book.  Titled Chauvet, the dream unlocked, Steve attempts to show many of the things he believes he has found. His theory is that the artists were not simple cavemen, but people of a very high intelligence that had a very strong artistic ability. So much so that Steve thinks there are many embedded images hidden inside the main images.

This creature here is a prime example of what he tries to show as having an embedded image. There appears to be a cat’s face in a portion of this animal’s head.

Have a look and see if you can find it: 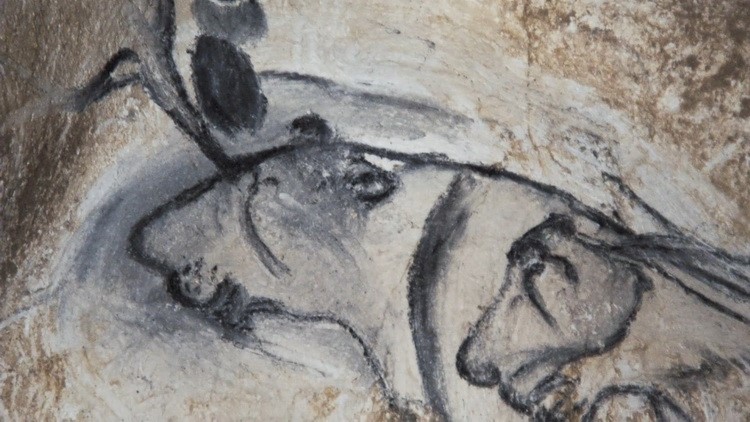 Steve goes on to reveal how one image can confirm another, so if you think you see something that just seems to be nothing more than coincidence, there will be a piece that strengthens this ‘coincidence’ and makes it become far more than that. The pieces slowly start to fit together as you progress through each section.

Steve goes on to suggest that the main section of art, as seen in the first image above, is a storyline of events that depict several things. One of these, the birth of the first Egyptian God, was pointed out to Steve by Catherine Acholonu who was a Nigerian writer, researcher and former lecturer on African Cultural and Gender Studies. She served as the former Senior Special Adviser (SSA) to President Olusegun Obasanjo on Arts and Culture. She pointed out some very important details in one of the images Steve revealed.

He goes on to suggest that the art is far more than a record of events and that it may also be the funding information for the ancient Egyptian and Sumerian cultures, among a few others, that spread around the globe.

He shows us how to read the art and where it led him. He reveals several gigantic geoglyphs that he found on the Earth’s surface by following the story in the art as well as providing a good set of images that share the same styles, techniques and content as that of the ancient Egyptians.For example, in this set we see long-horned rhino stacked in the exact same way as the Egyptians depicted ‘more than one’: 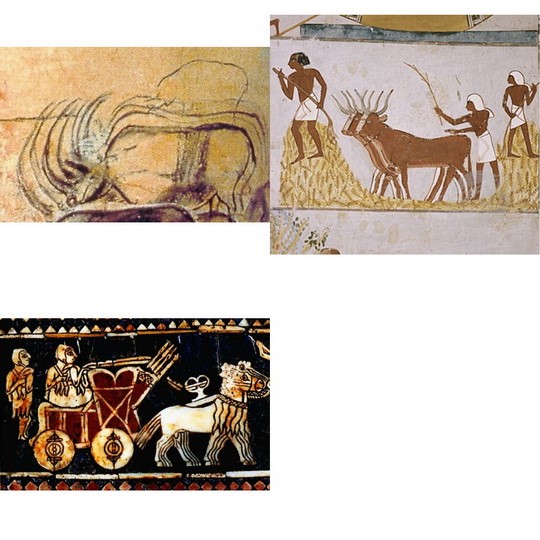 And here Steve noticed this hippo with its mouth open and tongue sticking out. It was this image that made Steve look deeper into what he had at first believed to be all nothing but coincidence. This has been rotated by exactly 90 degrees in order to show the comparison to the later image from the tomb ceiling of Seti the first and how the artists used several different techniques to hide and disguise messages in the art. 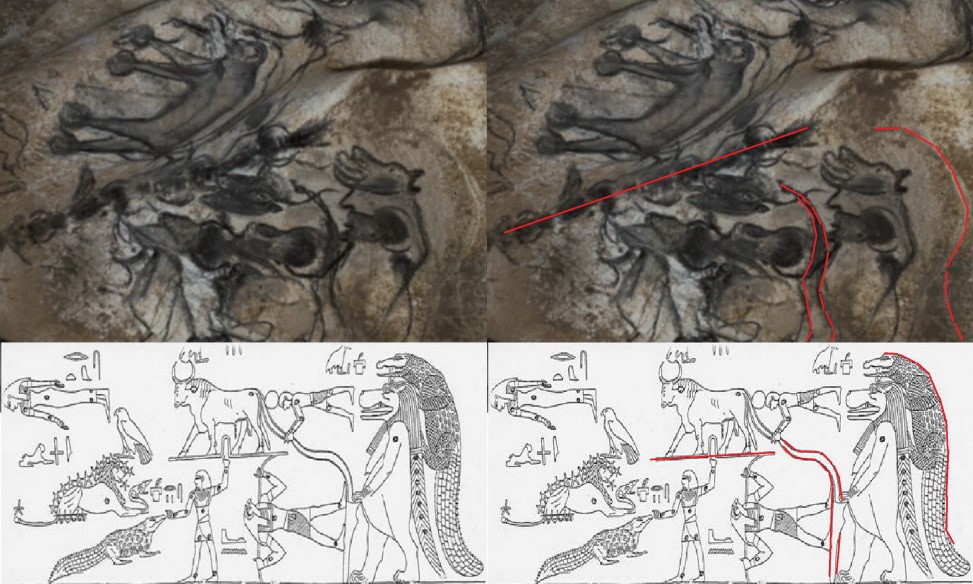 Here, we see just how far the art has developed from the original and how far around the globe the original message had travelled. We have Thoth (the bird-man) from Egypt, Lascaux cave art, Chauvet and Easter Island. 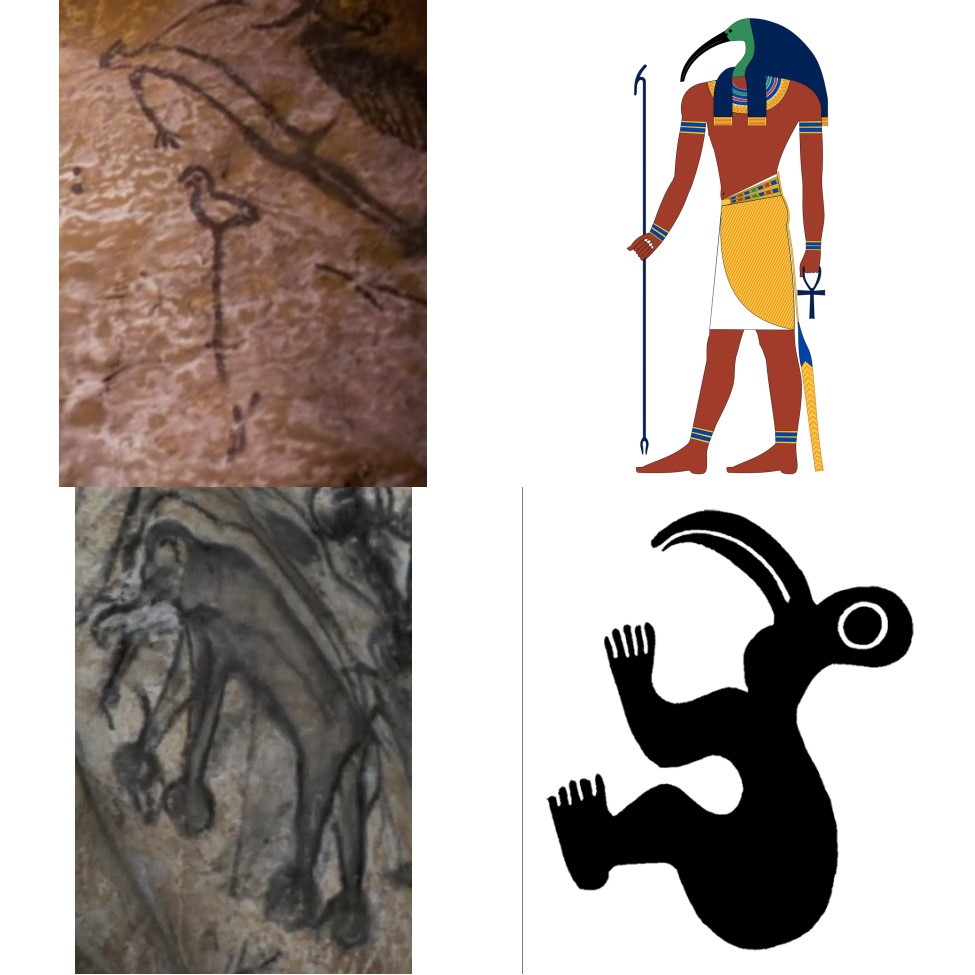 There even appears to be the ‘eye of Ra’ painted on a portion of a face. 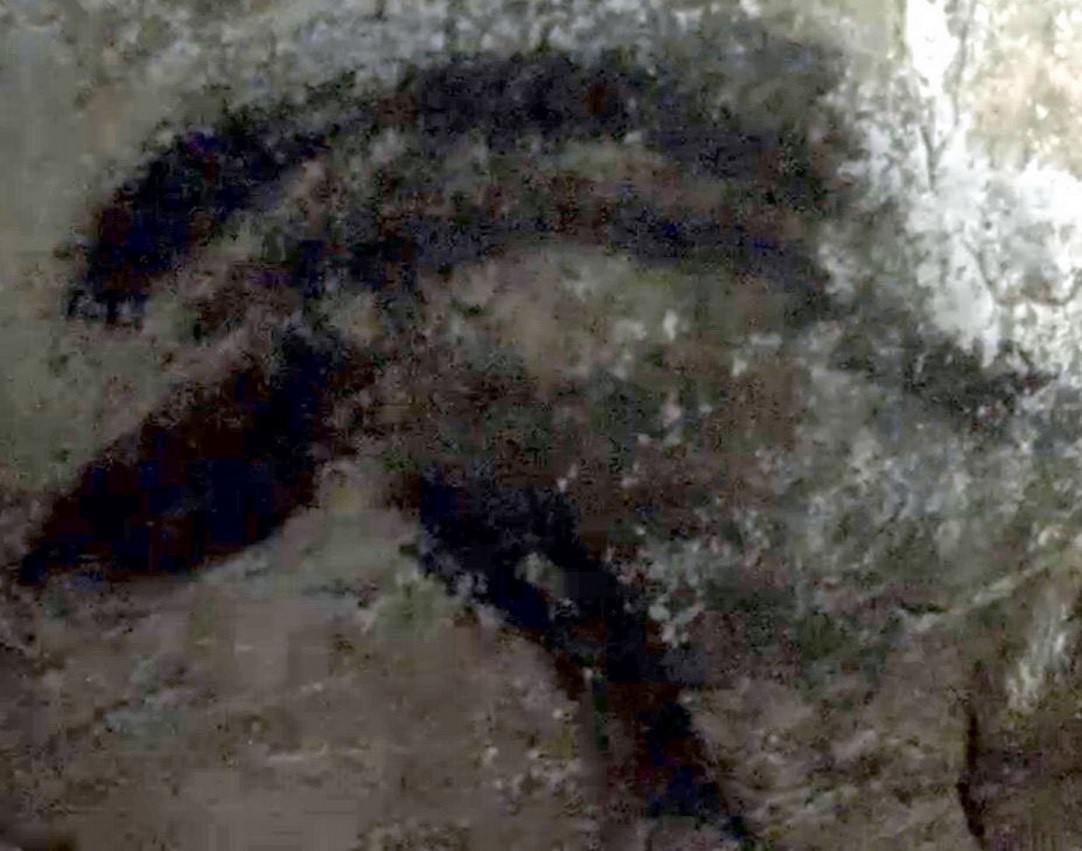 The problem that Steve has come across is that sections of the hidden art goes far beyond anything that is currently ‘acceptable’ in the main stream fields of study. He explains that he has provided everything that had he found in order to show the story that the art appears to be showing.

To understand this, we have to look at one of the most unusual images ever found in any ancient art.

A humanoid face stares righty at you from the art and almost begs you to unlock the rest of the story. The original is on the left, the mirrored image revealing the full face. 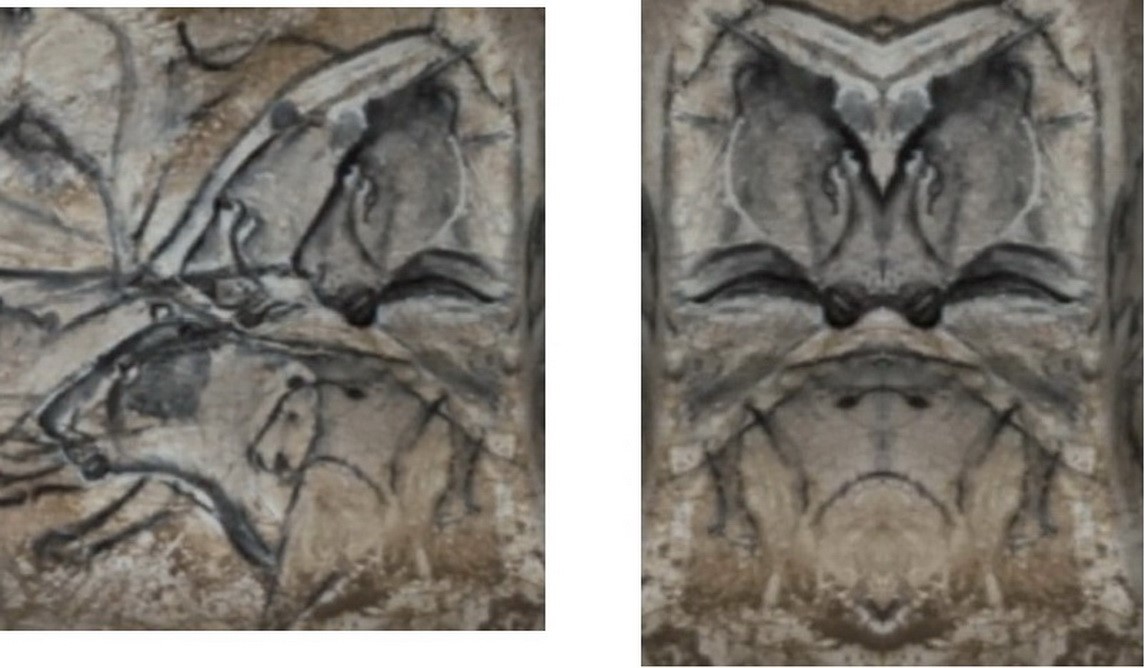 Some may say that Steve is “seeing what he wants to see” or calling it all pareidolia in order to debunk everything Steve has, but this does nothing to prove him wrong. He feels it is the easiest way for them to push this aside, so Steve asks for the reader to make their own judgements, do their own research and decide for themselves.

As for the cat’s face, if you could not find it, here it is: