Curiosity Rover finds “wheels” on Mars: Remains of an ancient...

Many ufologists suggest that NASA’s very own Alien rover; Curiosity has found “wheels” on the Martian surface: Is this object, in fact, the ultimate proof that life existed on the surface of our neighbor planet in the distant past? Are these the remains of an ancient civilization?

It’s nothing new to come across images like this from mars lately. Here, in this image beamed back by NASA’s rover exploring the red planet, we clearly see what appear to be ‘wheels’ on the surface of the red planet.

But hold on a minute, how is that possible? The Martian “Crab-like” creature, the pyramid, the helmet, squirrel, cube, and now… ummm, wheels on Mars? Let’s take a breath. Are all of these “objects” the result of Pareidolia? Or are we not being told something?

Has Curiosity discovered the remains of an ancient Martian vehicle on the red planet? It is a possibility according to many UFO hunters who claim that Mars, was inhabited by an ancient civilization in the distant past. 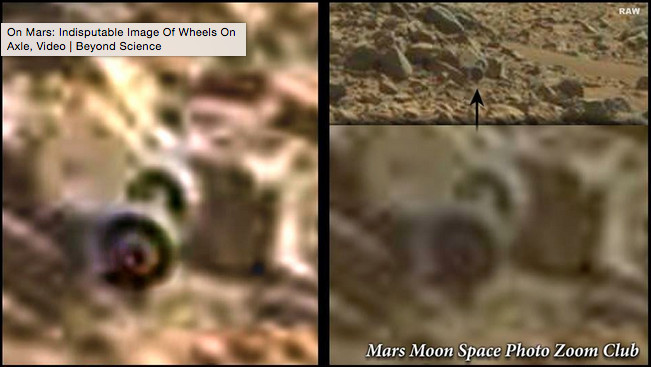 According to YouTube user Paranormal Crucible: “the image from NASA’s Curiosity rover appears to show a wheel and axle on the surface of the red planet. As we zoom in, we can clearly see two circular objects in parallel, very similar in design to a wheel and axle. The object clearly looks out-of-place in the Martian landscape, and is clearly recognizable among the rocks.”

“As you can see with these filtered images, the object is definitely not natural, and instantly stands out as artificial. Could this be final proof of past life on the red planet? or can the anomaly be explained away, as only tricks of light and shadow,” he added

But is this really an object with wheels on the red planet or are we being fooled by Pareidolia? Which is making us believe that we are seeing wheels on Mars?

Many people believe that the mysterious object seen in this image doesn’t seem to resemble any other rocks in the surrounding landscape, and thus, cannot be another natural formation on Mars.

But what do you think? Is it possible that after dozens of images which appear to show unexplained objects on the surface of Mars? This is one of those that cannot be debunked?

Here we leave you with the ORIGINAL NASA RAW image so you can check out the mysterious artifact by yourself. To find the “wheels” on Mars, simply zoom into the “center-left” part of the image near the geological accumulation. There you will see two mysterious objects that eerily resemble wheels.

Don’t forget to check out other creepy images from Mars where you can see all kinds of shapes and objects, and let us know what you think about these mysterious images that have caused quite a debate among scientists and UFO hunters.