Declassified reports link Winston Churchill to a number of UFO... 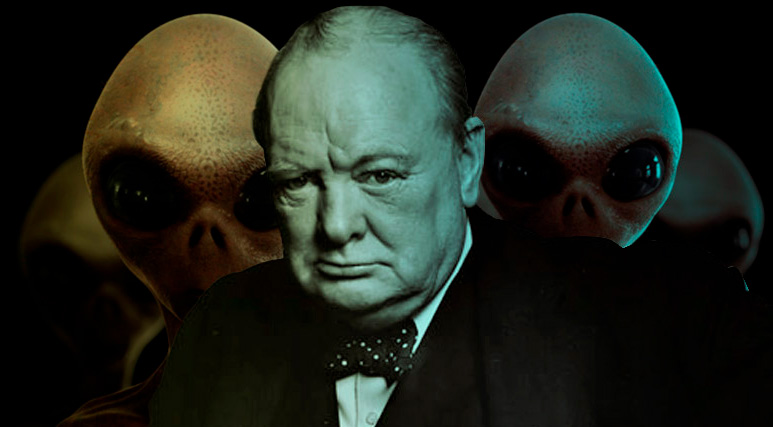 A series of recently declassified reports reveal a peculiar role of former British Prime Minister, Winston Churchill, in the cover-up of numerous UFO sightings. Speaking about one mysterious UFO sighting, Mr. Churchill ordered details to be classified saying that: ‘This event should be immediately classified since it would create mass panic among the general population and destroy one’s belief in the Church’.”

Is this the ultimate evidence governments around the globe are aware fully aware Earth is being visited by intelligent extraterrestrial civilizations?

During his two terms, between 1940 and 1955, Churchill set up a team dedicated to uncovering the origin of the numerous encounters with unidentified flying objects: the “Flying Saucer Working Party.”

Researchers analyzed hundreds of cases and concluded that, although it was not possible to rule out the presence of extraterrestrial visitors on Earth, many of the studied cases appeared to correspond to natural phenomena, human-made unmanned aerial vehicles, or simply “psychological delusions.”

One of the most prominent cases analyzed by the group was the sighting of a metallic flying saucer in the county of Cumbria, northwest England, in 1952.

There, a pilot of the RAF (Royal Air Force) encountered, as he returned from a reconnaissance mission from continental Europe, a strange silver flying machine, which quietly disappeared near the aircraft. The enigmatic UFO had shadowed the plane for quite some time. According to reports, the crew had even taken photographs of the metallic UFO.

Upon learning of the incident, the prime minister ordered the case immediately to be classified, since, according to the prime minister, if the population found out about it, it could create panic and would destroy faith in God.

Interestingly, a weapons expert dismissed suggestions the object was a missile as the event was “totally beyond any imagined capabilities of the time.”

“There was a general inability for either side to match a plausible account to these observations, and this caused a high degree of concern,” wrote the scientist, whose details are redacted.

“Mr. Churchill is reported to have made a declaration to the effect of the following: ‘This event should be immediately classified since it would create mass panic among the general population and destroy one’s belief in the Church’.”

Dr. David Clarke, author of The UFO files and Senior Lecturer in Journalism at Sheffield Hallam University, concluded that the “fascinating” files showed the level of concern about such “bizarre incidents” during the war. It does tie in with what we already know as you have to remember that this was also long before the phrase UFO was created,” he said.

“I suspect there is an element of truth to the statement.”

These and other claims are contained in thousands of pages of declassified files on UFOs, released online by the National Archives.

Around 18 files are made up of over 5000 reports, letters, and drawings.