Did Nostradamus predict World War III would break out in...

Yikes! According to a verse written by the famous French prophet:

“Twice put up and twice cast down, the East will also weaken the West. Its adversary after several battles chased by sea will fail at time of need…Pestilences extinguished, the world becomes smaller, for a long time, the lands will be inhabited peacefully. People will travel safely through the sky (over) land and seas: then wars will start up again.”

For centuries have Nostradamus’ mysterious predictions mystified millions of people around the globe. Both believers and non-believers have been captured by the astonishing predictions made by the French prophet centuries ago.

Born in 1503, Michel de Nôtre-Dame, better known as Nostradamus is one of the most notorious prophets to ever live on Earth.

He was a French prophet, who was also a celebrated physician and astrologer and during the sixteenth century, he made a serious of predictions in his book “Les Prophecies” which would capture the interest of future imaginations, mostly because of his stunning accuracy in predicting future events.

Among his most notorious predictions, the French prophet somehow foresaw the Moon Landing, the assassination of J.F.K., Hitler, The Nuclear Bomb and 9/11. 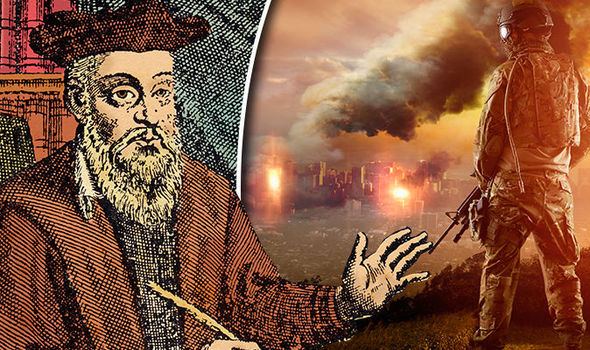 He foresaw the nuclear bomb and this is what he wrote:

“The heavenly dart with stretch its course
Death in the speaking: a great achievement
The proud nation brought low by the stone in the tree
Rumours of a monstrous human, bring purge, then expiation.”

The French prophet also foresaw the death of Henry II when he predicted:

“The young lion will overcome the older one,
On the field of combat in a single battle;
He will pierce his eyes through a golden cage,
Two wounds made one, then he dies a cruel death.”

He also predicted Napoleons Conquest in a striking verse:

“Pau, Nay, Loron, more fire than blood,
Swimming in praise, the great man hurries to the confluence.
He will refuse entry to the magpies,
Pampon and Durrance will confine them. “

Curiously, Pau, Nay, and Loron—actually Oloron—are three towns in Pars. Rearranging the above mentioned towns letters spells Napaulon Roy, which according to many believers eerily resembles Napoleon the King in French.

But perhaps the most worrying predictions—still to come true—is the alleged prophecies of World War three that according to many believers, could still break out in 2017.

Many agree that most of Nostradamus’ works seem to prophesy death and destruction, and following that tendency’ the French prophet apparently foresaw a catastrophic war that would last as much as 27 years between world’s two great superpowers after the rise of a third Antichrist.

Firstly, the French prophet apparently saw the rise of Trump hundreds of years ago.

“The False Trumpet concealing madness will cause Byzantium to change its laws. From Egypt there will go forth a man who wants the edict withdrawn, changing money and standards.”

“The trumpet shakes with great discord. An agreement broken: lifting the face to heaven: the bloody mouth will swim with blood; the face anointed with milk and honey lies on the ground.”

It’s believed that the False Trumpet is a reference to Donal Trump to those who believe in the Frenchman’s prophecies. 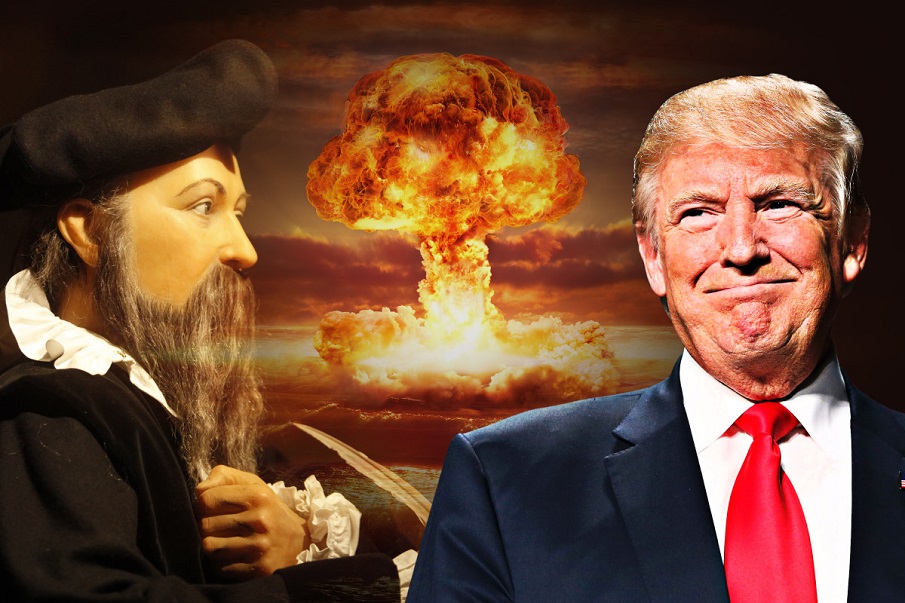 Furthermore, he foresaw War as he mentioned a “weakened west”…

“Twice put up and twice cast down, the East will also weaken the West. Its adversary after several battles chased by sea will fail at time of need.”

“The great man will be struck down in the day by a thunderbolt. An evil deed, foretold by the bearer of a petition. According to the prediction another falls at night time. Conflict at Reims, London, and pestilence in Tuscany.”

“Pestilences extinguished, the world becomes smaller, for a long time the lands will be inhabited peacefully. People will travel safely through the sky (over) land and seas: then wars will start up again.”

Interestingly, in the age where the internet is accessible to most of the population, many of Nostradamus’ predictions were spoofed and rapidly spread across the internet, which were later proven to have been written by Canadian students for a research paper on Prophecies.

Got to be careful when interpreting his prophecies right?

Professor Jean-Claude Pecker, of the Collège de France in Paris argues how Nostradamus did NOT write about future events, but events that had already happened.