Did The Red Barron Bring Down a UFO during World...

German pilot, Manfred Albrecht Freiherr von Richthofen, aka the Red Baron, was officially credited with shooting down 80 enemy planes during World War I, but a new sensational book claims that the man considered the ace of flight was also the first pilot in history of mankind to shoot down a UFO, and by UFO I mean extraterrestrial.

It is a title that does sound crazy, but when I first read about it, I had to dig further and find out more, given the fact that the Red Baron has a great reputation.

A new book, The UFO’s of the First World War, by author Nigel Watson, recounts the confession that took place in the year 1999 by a fellow pilot of the Red Baron, Peter Waitzrick, who supposedly witnessed the epic encounter in the skies between the Red Baron and an unidentified flying object.

Waitzrick waited until he was 105 years old, a good 80 years after the alleged Red Baron Dogfight with alleged interplanetary visitors, when he confessed to what he saw in the clear blue sky above Belgium during the spring of 1917. An incredible story that is worth a movie in Hollywood? But is this confession backed up by facts? Well here are the details.

The Red Baron and his fellow pit Waitzrick were on a mission early in the morning when the ace of flight, the Red Baron came into contact with what they described as something like a silver dish covered with strange looking orange lights, something, unlike anything they had ever seen.

Very sure of what he had seen at that moment, the Red Baron didn’t hesitate to challenge the unidentified object on a  duel chasing the silver saucer across the Belgium sky and turning out victorious in the end. 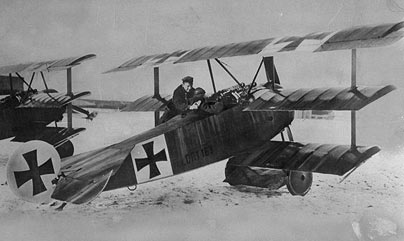 Waitzrick claims that he witnessed the entire encounter between the Red Baron and what he calls believes were alien beings.

“We were terrified because we had never seen anything like this before. The Red Baron immediately opened fire, and the saucer fell like a rock, as it fell, the object broke the branches of the trees as it crashed in the woods”.

We all know the amazing stories that are behind the Red Baron and his incredible skills as a fighter pilot, where even his enemies saw him as the best of the best. But what about extraterrestrial?

You would think that an encounter with a UFO would be something on another level, right?

Is there a possibility that Manfred Albrecht Freiherr Were von Richthofen, aka the Red Baron shot down an extraterrestrial craft, that was capable of interplanetary flight, with extremely advanced technologies with his limited Fokker triplane?

According to Waitzrick, yes! He says that there were two pilots in the UFO and that after hitting the ground they left the rugged ship before fleeing to the trees.

It is common among pilots to witness strange objects in the skies, and if pilots today witness unexplainable objects while flying across the globe, it certainly would be possible in the past as well.

The Red Baron, Waitzrick, and their squad originally believed that the UFO that was shot down by the Red Baron was a secret plane that originated from the United States, but when they became familiar with UFO reports, they remained convinced that what they saw were actually visitors from another planet.

“There is no doubt in my mind that the Baron shot down some kind of spacecraft from another planet and those little guys who ran into the woods were some kind of aliens.” -Waitzrick

Whether the sensationalistic claims by the wingmen of the Red Baron are true is one thing, but it is certain that seeing UFOs fly around today is something that has become ordinary, and it would have been possible during World War I.

It is an entertaining story that we look forward to researching in the future.