Does This 15th Century Painting Depict A UFO With The...

A Renaissance painter’s large mural in an Italian church is seeing a resurgence of interest. The attention isn’t from the religious people who would, of course, appreciate the depiction of the Virgin Mary, but from ancient alien conspiracy theorists who noticed the otherworldly object in the skies above her.

In Carlo Crivelli’s 1486 “The Annunciation with Saint Emidius,” the Virgin Mary is shown kneeling inside a room in the town of Ascoli Piceno, Italy. A very thin laser-like beam of glowing golden light intersects the painting, shining down and touching Mary on the head. The light originates from a vortex of swirling clouds that appears similar to a UFO hovering in the air.

The beam of light supposedly represents the Immaculate Conception, the moment that Mary became pregnant with the baby Jesus. Traditionally, the object is thought to be a heavenly halo. Traditional religious thinking assumes that this was divine intervention, but what if the object was not divine, but intervention by extraterrestrials? 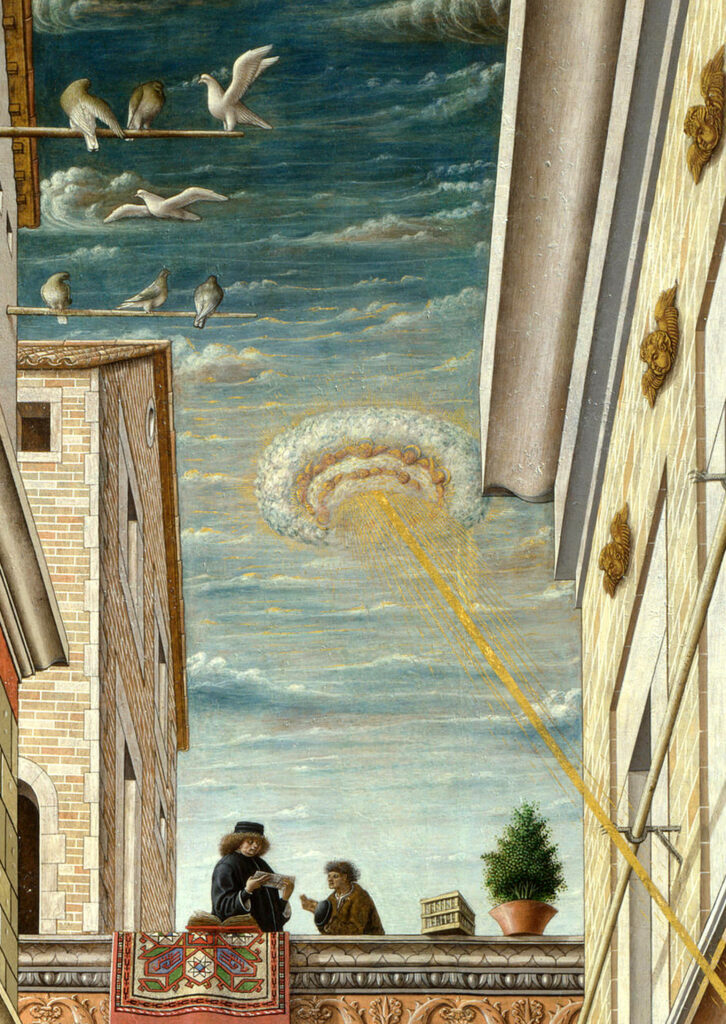 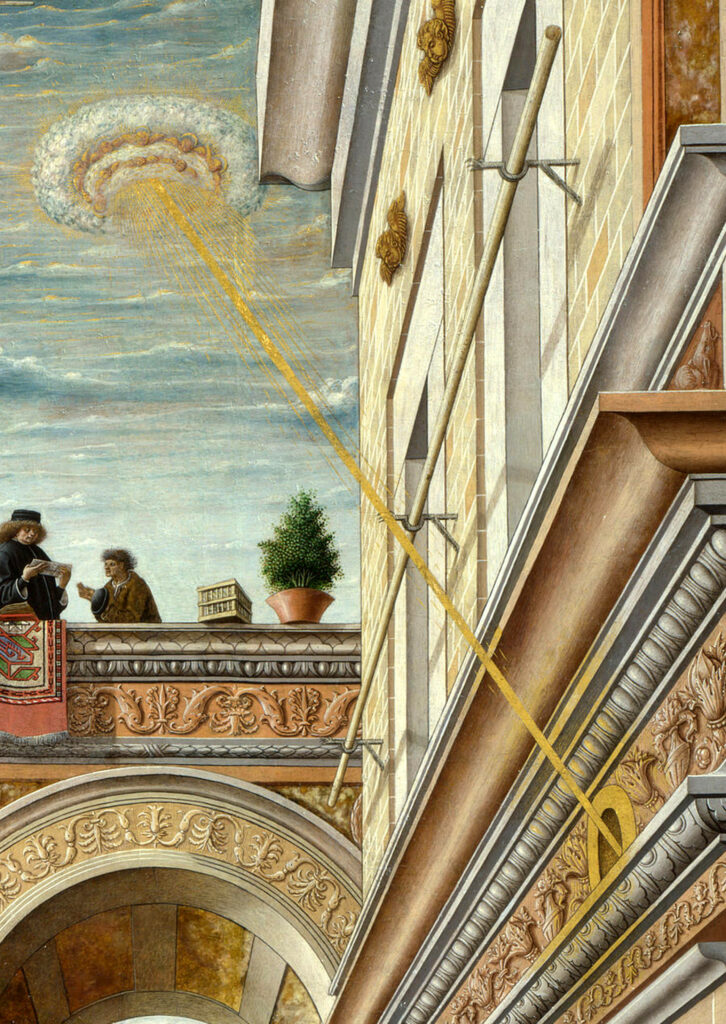 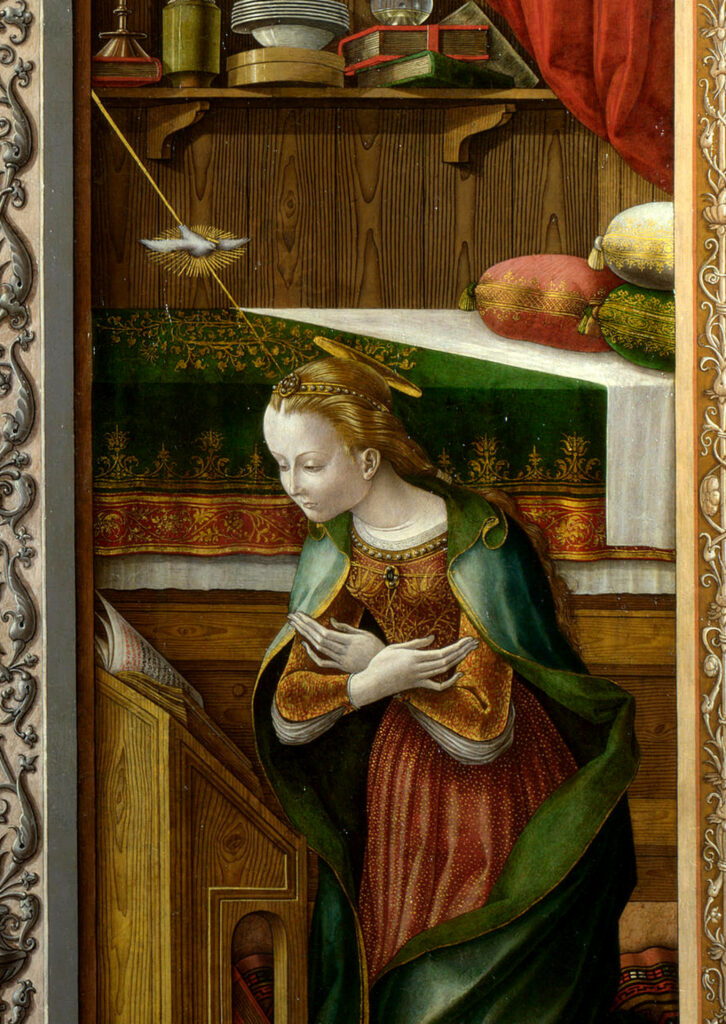 An article from Listverse examines The Annunciation with Saint Emidius, as part of a look at ten historical works that seem to depict UFOs. For alien enthusiasts, the painting depicts something that would leave many devout people with their mouths hanging open in shock.

“UFO and alien enthusiasts have interpreted the halo as a disc-shaped UFO. Their belief is that Jesus was not divine at all. Instead, it was the result of genetic engineering and the implanting of a child into the unsuspecting Immaculate Conception. Supposedly, she was abducted and impregnated by an alien race.”

Rather than representing a beam of Holy light, the beam could be something else entirely.

“They argue that the beam of light striking Mary while she is indoors is consistent with modern-day alien abductions. Many people who claim to have been abducted state that they were inside their homes when a strange light shone from outside the buildings.”

In an examination of other ancient paintings that seem to depict UFOs, computer scientist, Jacques Vallée noted that the phenomena have cropped up in many works of art during the 15th century and back to ancient times.

Vallée has co-authored a book, “Wonders in the Sky,” about early reports of UFOs going back to Biblical times.

Jacques Vallee and Chris Aubeck, authors of 'Wonders in the Sky,' circa 2003. pic.twitter.com/ZJHMsMMmil

He is no newcomer to the subject, once being the principal speaker at the only major United Nations UFO presentation in history, which took place in 1978. Vallée is a renowned and well-respected early UFO researcher since the late 60s.

Jacques Vallée testifying at the United Nations at the request of Grenada's Prime Minister and UN Ambassador, 1978 pic.twitter.com/ORRebsUrPO

In regards to this painting, Vallée points out that the artist would not have been present to witness what took place in the painting. Crivelli’s painting was done almost 1500 years later. However, why were so many people, including scientists, reporting strange aerial objects from pre-20th-century accounts?

In an interview with the Huffington Post, Vallee said:

“The value of it, scientifically, is that now we can anchor the beginning of the UFO phenomenon into real, documented history,” Vallee said.

The longtime UFO researcher does not claim the painting shows proof of alien life, but rather, that it is part of a larger body of evidence that UFOs have been seen and reported since ancient times.

Taking the scientific approach, Vallée approached it with an objective and questioning mind.

“You cannot simply say that, because somebody saw something round in the sky in medieval times, it’s the same phenomenon that people see today. We are not making that statement. We’re simply describing what people saw and the phenomena associated with it as a contribution to the overall study of the history of the phenomenon.”

So what do you think? Does the object in the sky represent the Immaculate Conception or something else? Which story seems more plausible and based in reality? In either case, the story is definitely out of this world.

For more, see another painting, this time an 11th-century fresco, that UFO enthusiasts think depicts UFOs present at the Crucifixion of Christ.