This is forbidden archaeology at its best. Researchers were left perplexed by an unknown race with Elongated skulls discovered inside a 5,000-year-old Ancient Necropolis.

The Hypogeum of Ħal Saflieni

According to reports, a set of mysterious elongated skulls, which belonged to an unknown race were discovered by researchers inside an ancient necropolis unearthed in Malta. The ancient site is believed to date back at least 5,000 years. Among the most mysterious discoveries was one particular elongated skull which lacked the Fossa media –the join that runs along the top of the skull.

As we immerse ourselves into the intricate history of man, we come to discover how little we know about humanity and our civilization. In fact, it seems that every single discovery takes us further back in time, correcting the incomplete pieces of the puzzle that researchers today call mainstream history.

One ancient site that promises to rewrite the known history of mankind is the Hypogeum of Hal-Saflieni, a subterranean archeological site which according to researchers dates back to around 3300 – 3000 BC. During excavations, researchers discovered that they were analyzing the remains of an ancient necropolis which revealed thousands of remains with elongated skulls, unlike any of our ancestors in our evolutionary tree. 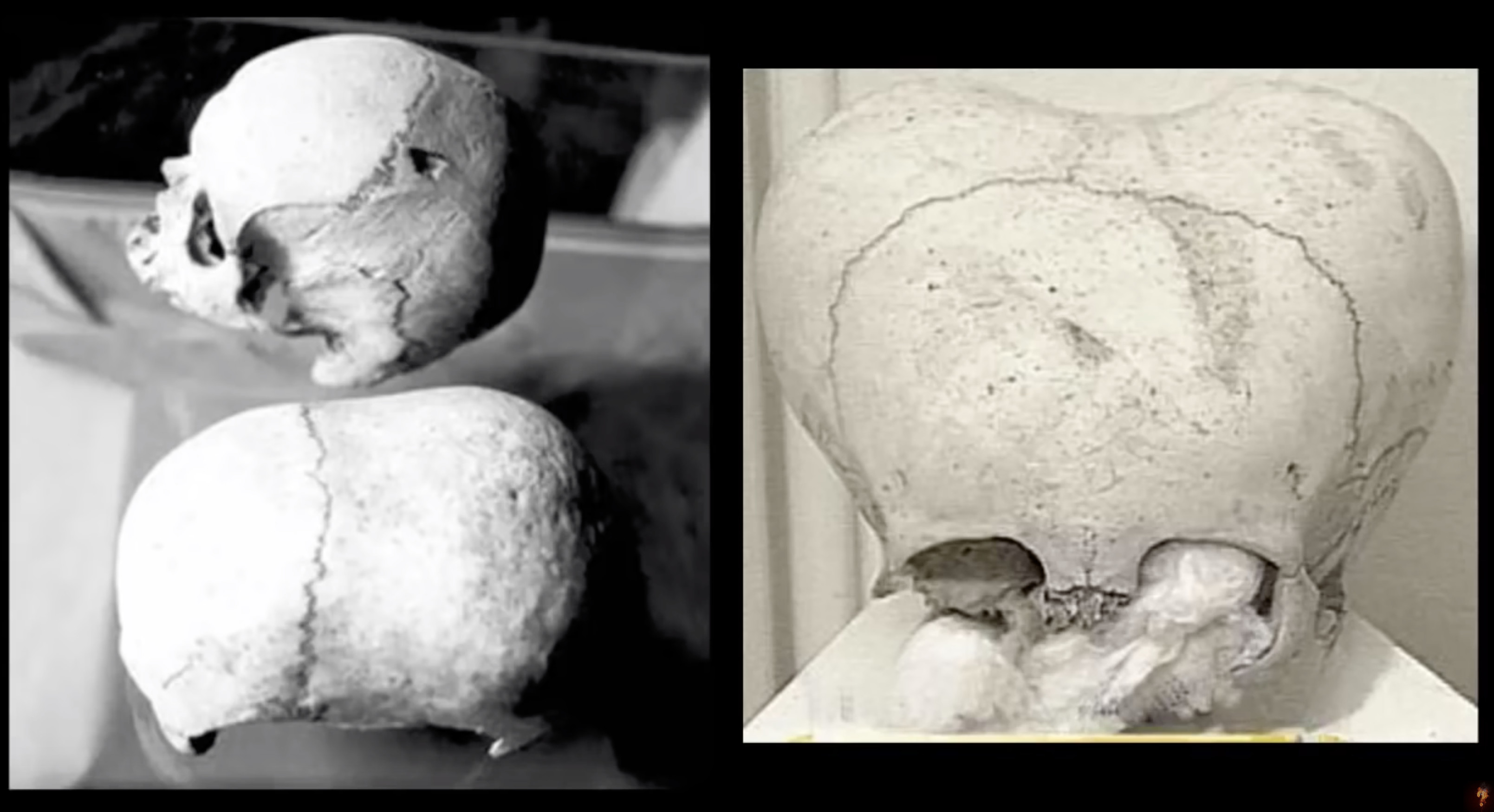 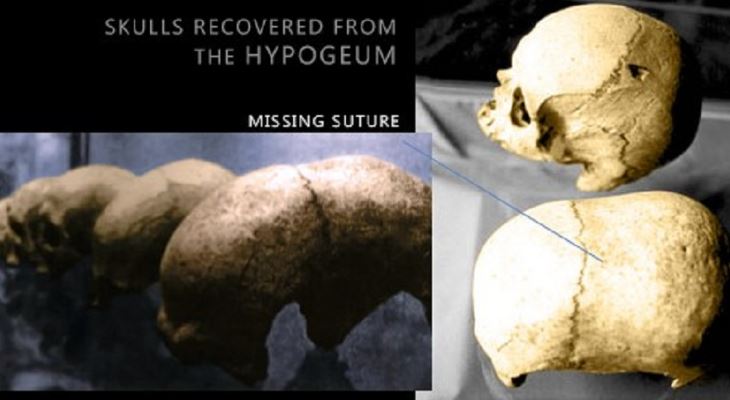 The enigmatic Hypogeum of Hal Saflieni isn’t just well known for the thousands of elongated skulls discovered there, it has other characteristics that have attracted researchers from around the globe, who have come to study the unique acoustic properties inside the gigantic, 5,000-year-old underground chambers of Malta.

According to visitors and researchers who had the opportunity to enter the complex ancient site, once inside, it feels as if you were inside a giant bell: architecture critic Richard Storm explained the sensation: “Because you sense something coming from somewhere else you can’t identify, you are transfixed.” (Source)

Like many other discoveries, this too was made by accident when in 1902, workers on a construction site broke through the roof discovering an incredible ancient secret.

A pioneer of Archaeology and Jesuit priest and a member of the ‘Society of Jesus’ Manuel Magri was in charge of the excavations. Mysteriously, just before the publication of the excavation report in 1907, the priest died under suspicious circumstances at age 56.

His notebooks containing his observations disappeared after his death, but over a century later, some of his letters to Fr Alfred Louis Delattre, a Missionary of Africa and an archaeologist, were found. Sadly they contained little information about the skulls but showed that he had done careful work as a pioneering archaeologist at the Hal Saflieni Hypogeum in the early 1900s.

In an article from The Times Malta, archaeologist Br Josef Mario Briffa noted:

“The documents throw important new light on Fr Magri’s archaeological work, particularly in the absence of his notebooks containing observations, which disappeared at his death 100 years ago,” said Br Briffa.

Most of the bones and skulls found at the site were apparently found in a jumbled pile of fragments.

“Traced in the General Archive of the Missionaries of Africa in Rome, the letters, written in French, show how Fr Magri had discussed his finds at the ‘Necropolis.’ He stated that finds, such as bones and broken terracotta, had been thrown in sans ordre (without any order). The bones were very fragmented, and only a few skulls could be saved.”

The ancient site was described as a massive catacomb with three intricate levels, sculpted in around 2000 tons of rock. The walls of the ancient site were decorated with several geometric figures: Spirals, Spheres, pentagons, floral themes and depictions of animals.

The mysterious elongated skulls were unlike those of ordinary humans. Most of the skulls were on display in the Archaeological Museum in Valletta, however, after 1985, the elongates skulls found across numerous sites in Malta disappeared without a trace and have still not been found.

“Until 1985, the unearthed skulls were on display at the National Museum of Archaeology. Strangely, Heritage Malta, the authority responsible for Malta’s prehistoric heritage, removed them from public view around 30 years ago, and, since then, they have only been available to researchers by special permission.”

“Photos and books by Dr. Anton Mifsud and his colleague Dr. Charles Savona Ventura, who first investigated the skulls, testify to their existence and abnormality. Vittorio Di Cesare and Adriano Forgione of HERA magazine, Rome, Italy were the only non-officials able to obtain permission to investigate the skulls. They published a very thorough article regarding their findings and it would seem that they were very impressed.”

Update: In July 2019, an article from Malta Today suggests that Heritage Malta has joined with the Superintendence of Cultural Heritage and Macquarie University of Sydney, Australia to conduct the first-ever interdisciplinary analysis of the elongated skulls from the site. So far, there don’t appear to be any updates into what they may have found.

“The project will see the combination of traditional archaeological, historical and archival research with cutting-edge scientific analysis to investigate all the aspects of the lived experiences of the people of Ħal Saflieni, including their health, disease, lifestyle, diet and ancestry profiles.”

See the skulls from Mystery History below:

While many people remain skeptical about elongated skulls, and every time such remains are found people tend to categorize them as a hoax or result of head binding, the elongated skulls in Malta are anything but ordinary. In fact, their existence and anomalous characteristics are well documented by texts and images of Dr. Anton Mifsud, and his colleague Dr. Charles Savona Ventura who detailed their numerous strange characteristics like elongations, drilled and swollen occiputs, and strangely developed temporal partitions, which are unlike any known human race on the planet.

Interestingly, the enigmatic elongated skulls caught the eye of the National Geographic Magazine which wrote about them in the 1920s describing the ancient inhabitants of Malta as a race of beings with elongated skulls:

“From an examination of the skeletons of the polished-stone age, it appears that the early inhabitants of Malta were a race of long-skulled people of lower medium height, akin to the first people of Egypt, who spread westward along the north coast of Africa, whence some went to Malta and Sicily and others to Sardinia and Spain.”

One of the most mysterious parts about these skulls is the fact that they seem to have been carefully kept hidden from the public for so long.

Like many other discoveries around the planet, this too seems to indicate there are parts of our history that may need to be rewritten, and that the strict mainstream patterns set into place are keeping modern society from digging further into the forgotten history of mankind.

See more in the History Channel documentary below: